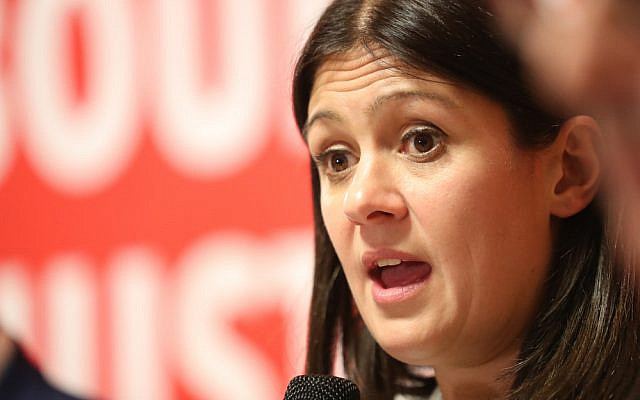 Really? Now, I know I must have been transported through the looking glass.

Why do I fear for our collective peace-of-mind? Because after three years’ battling Labour antisemitism – which let us not forget, has its roots in opposition to Israel’s existence – the JLM has decided to support the LFPME Chair as its preferred candidate for Labour Leader.

And let us also not forget that Ms Nandy is not just the leader on a “Buggins turn” basis or simply because of her heritage. She is LFPME leader because she is an outspoken critic of Israel who according to many on-the-record comments believes that Israel (rather than the Arab and/or Palestinian leadership) is mainly culpable in the Palestinian tragedy. Her support could easily be perceived as being not just for the Palestinians, but against Israel.

And yes, I know she has spoken convincingly of her opposition to antisemitism, and I don’t doubt her absolute sincerity on this. And yes, I also know that “criticism of Israel is not antisemitism” but as Jewish people, you and I know, the two are rather easily confused and conflated, so if her position on the Palestinian tragedy is that Israel (AKA the Jewish State) is responsible, how long before the implacable “anti-Zionists” realise they still have a home in a mainstream British party? How long before the implacable “anti-Zionists” realise they could have someone like-minded on the way to Downing Street?

As for how vocal Ms Nandy was in her opposition to antisemitism while in the Shadow Cabinet, we have mainly her word for it. As with all the candidates who are now claiming to have said this or that, the phrase “talk is cheap” arrives, unbidden, in my head.

Some of Ms Nandy’s supporters (possibly she herself) now claim her resignation from the Shadow Cabinet was, “at least in part,” over Labour antisemitism, possibly making her slightly more anti antisemitic than other candidates. At the time, however, her resignation was said to be over “party unity.” And who can now confirm or deny?

The reality, of course, is that none of the remaining candidates (now just 3 since Emily Thornberry bowed out) quit Labour over antisemitism. Not one of them declared publicly something to the effect of: “This antisemitism is disgraceful. I’m out.” Whether the leadership candidates declined to quit due to craven cowardice or “o’er vaulting ambition” (which, presumably, they justified to themselves as “Party loyalty”) not one of the four came out publicly at the time to oppose the blatant antisemitism inside the Labour Party. I feel sure Robert Peston or Laura Kuenssberg or Nick Robinson would have carved out time for such a statement had any of them wished to make it.

Despite that silence from all the candidates (or perhaps because of that silence from all the candidate), there have been endless attempts to rewrite history. This extended post-mortem, conducted largely on Social Media, has been singularly unedifying and most closely resembles an infant-class squabble over who pulled whose hair harder, who told teacher and what teacher did (or did not do)…

And now JLM is backing Lisa who claims she spoke up loudest, even though there is no hard evidence of that, and even though she is leader of a “gang” that is implacably hostile to the Jewish State.

I totally understand why JLM members would not support Rebecca Long-Bailey who appears to be the Corbyn Continuity candidate. But I fail to understand why JLM was not supporting Sir Keir Starmer, who has a real career under his belt. While he is a member of LFPME I suspect (hope) he is intelligent enough to recognise he has been fed a fake narrative. I also hope he is open-minded enough to reject the propaganda and learn the historical facts.

In a bid to understand why Sir Keir was not the JLM’s favoured candidate, I sought the wisdom of the hive, asking my Jewish Facebook friends for their views. Their comments were illuminating and I am genuinely very grateful. Several people suggested it was because Sir Keir had “failed to speak out” on Labour antisemitism. But I am instantly discounting that as the same could be said of all the candidates.

A few people made comments relating to his “charisma,” or lack thereof with one respondent describing him as “uninspiring.” I don’t know how you feel about charisma, but I am deeply suspicious of it. Adolf Hitler and Oswald Moseley had it in bucket-loads. Anyway, it is worth bearing in mind that party leaders usually become charismatic in office (proximity to power, good suits and make-up on camera), though there are exceptions – Jeremy Corbyn, for instance.

In the end, his rejection by JLM seems to come down to Left-wing domestic politics and Brexit. He is hated for his Brexit role in Opposition. But just because Sir Keir was handed a radioactive portfolio in Shadow Cabinet, I see no reason for Jewish Labour members to punish themselves (and potentially all of us) by helping another Israel hater to become leader of a mainstream party and take a step closer to No 10.