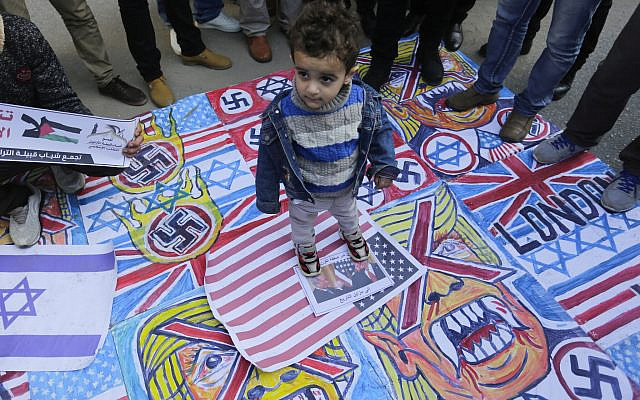 A Palestinian child stands on the illustrations of the British Union flag, the Israeli flag, and an American flag during a protest against the American peace plan in the Middle East, in Gaza City. (Photo by Mahmoud Issa / SOPA Images/Sipa USA via Jewish News)

Britain’s Jewish community, in line with its American counterparts, is encouraged by Israel’s series of peace deals with Arab states. In the latest manifestation Sudan – regarded until the latest accord as a terrorist state – has signed on the dotted line. If polls are believed Donald Trump is heading out of the White House. But on this aspect of his confusing foreign policy he is leaving on a better note.

As the BBC’s veteran Middle East editor Jeremy Bowen observes, an ‘iron wall’ between Israel and the Arab states, first breached by the cold peace with Egypt and Jordon, shows signs of coming down. The warming relationship between Gulf Arabs and Israel may have been greased by sale of advanced US F-35jets. It will also have important economic benefits.

It is axiomatic that trade with your closest neighbours is the most efficient. But at its core the deals forged with encouragement from the White House are strategic. Israel and ‘moderate’ Arab states are aligning themselves against an arc of Shi’ite radicalism reaching from Iran through Syria to the Yemen.

One might have thought that the openings to the Gulf would be welcomed by Israel’s Arab minority which have played such a significant role in the health care sector in the pandemic. As Arab and Hebrew speakers, the opening of the new diplomatic and trade bridges might seem to offer an opportunity for improving economic opportunities.

The situation is more complicated than that. The Joint Arab List in the Knesset generally takes the view that the route to peace for Israel is through the West Bank and Gaza. Indeed, Ayman Odeh, the Hadash Party lawyer who leads the Joint List in the Knesset, has travelled to Ramallah in an effort to keep open a dialogue with West Bank leaders earlier this year. Even though he went as a democratically elected Israeli parliamentarian, he was sniped at by conservative elements in the Knesset.

Israeli-Arabs have more to gain from a peace deal with the Palestinians than almost any other grouping. In parts of northern Galilee region the green line cuts some towns in half, dividing kith and kin and complicating the extensive cross-border commerce.

The Netanyahu-Trump route to a broader Middle East settlement is seen as bypassing and diminishing the importance of reaching an agreement with the Palestinians. The initial deal with the UAE put Netanyahu’s threat to annexe the Jordan Valley on hold – but no one really knows for how long.

As, significantly, it drives a wedge into the Arab League agreements, reached in the Sudan capital of Khartoum, against signing peace deals with Israel until the Palestinian issue is dealt with effectively.

There is the possibility that a top down deal – which also secures Israel’s relationship with Saudi Arabia – could be a route to peace with the Palestinian Authority. But that could be a pipedream if it’s all change in Washington.

New administrations typically take months to settle in. And if a Biden administration were to re-engage on the Iranian nuclear agreements there could be big chill in relations between Washington and Jerusalem.

Amid all the upbeat publicity about flight openings between Israel and the Gulf, technology co-operation and much else it will be easy for the Palestinians to become collateral damage. The ‘Abraham Accords’ – as they have been named – do not address poverty and oppression (from their own leaders!) in Gaza, settlements and security conditions in the West Bank and the complexities of Arab East Jerusalem.

In the same way as the UAE won concessions from Israel on the Jordan Valley it is possible that Crown Prince Mohammed bin Salman, the effective rule of Saudi Arabia and guardian of Islam’s holiest shrines, could seek an Israeli-Palestinian accord as the price of a broader peace. But for the moment the Palestinian issue has been parked.

Israel’s Arab minority has come together much more strongly as political force in Israel’s frequent recent elections. It has good reason to be cautious about how the ‘Abraham Accords’ and any further deals will play out. 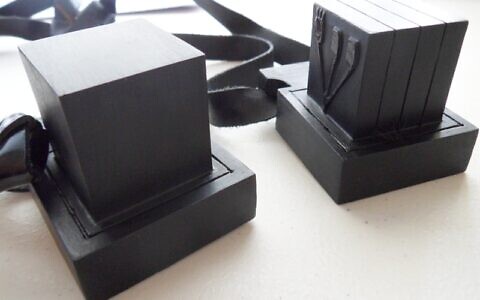 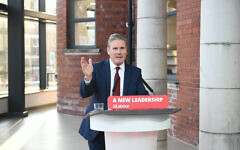 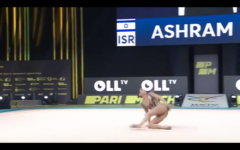