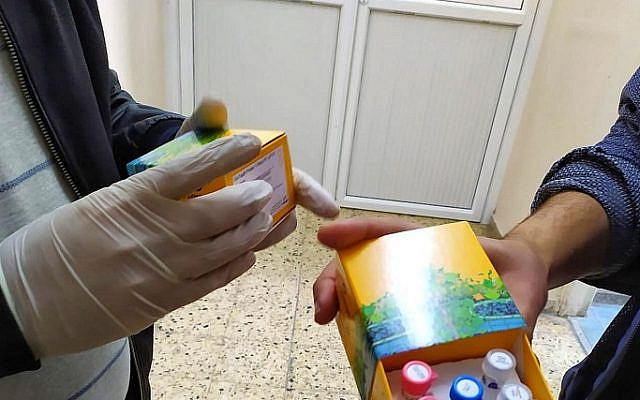 Test kits sent into Gaza with the help of Israeli officials. (COGAT Photo)

In the mid-1950s, my grandfather, Edward Bulkeley Van Zile, an Army veteran who served in World War I, got into a feud with the leaders of the Anglican Church. The feud manifested itself in letters to the editor of New Hampshire’s Manchester Union Leader in New Hampshire, a right-wing newspaper edited by Bill Loeb, with whom Van (as he was called) corresponded both publicly and privately.

In his public letters to the editor, Van railed against the pro-communist leanings of leading churchmen of his day. He kept a scrapbook in which he pasted these letters and wrote notations regarding the date they were published. At the top of one page of this scrapbook, Van wrote: “A DISGRACE TO ANY CHURCH!” (Apparently, he was into all-caps before it was a thing.)

Beneath this caption, Van pasted two letters published in July 1955 denouncing the Anglican priest Hewlett Johnson for his support of communism. Johnson wasn’t just any priest. He was Dean of Canterbury and preached in one of the most storied and prominent pulpits in England. In a letter published in the MUL on July 12, 1955, Van inveighed against Johnson for declaring that Christianity and communism “have points of contact which will pave the way to unity which will eventually bring blessings to the entire human race.”

This statement, which blurred the lines between communism, which destroys souls, and Christianity, which is supposed to save them, angered Van.  But what angered him even more was Johnson’s 1952 declaration that U.S. Air Force pilots were carrying out germ warfare attacks in the Korea. For Van, this accusation, leveled from the pulpit at Canterbury Cathedral, was an act of “moral turpitude” that should have gotten Johnson defrocked.

In another letter in the Manchester Union Leader, Van declared that Johnson’s allegation of germ warfare against the United States “was broadcast, time after time, in many languages” and that “no statement of anyone, probably, ever received more coverage than this dastardly lie.”

While the lie was being spread about America’s brave airmen, Van wrote, “there was a battlefront in that tragic land where British and American soldiers were holding the lines side by side. The ‘Red Dean’s’  big lie was certainly ‘aiding and abetting the enemy.’” Giving aid and comfort to the enemy was a serious charge for Van, whose oldest son, Theodore Bulkeley, died at the age of 19 on Iwo Jima during World War II. (It was his third pitched battle. He had previously fought on Tinian and Saipan.)

Van blew his stack again in 1957 when a group of 41 clergymen traveled to China and made nice with officials from the Chinese Communist party, which he believed, with good reason, was still holding American POWs in its jails four years after the end of the Korean War, in violation of the armistice. In a letter to the Manchester Union Leader, Van called the pastors who made nice with the CCP “The Rotten 41.” (Van was not one to shy away from tough invective!)

Van died in the 1960s, but if he were alive today, he’d be angry as ever. He’d be furious at the willingness of church leaders, journalists and intellectuals in general to carry water for authoritarian regimes who propagandize against the United States and its allies just like Hewlett Johnson did in the 1950s.

It’s happened a lot over the past few years.

One obvious target of Van’s ire would be Rev. Dr. Peter Makari, Area Executive for the Middle East and Europe for Common Global Ministries, the overseas arm for the Disciples of Christ and the United Church of Christ, two historically important (but dying) liberal Protestant churches in the United States.

Van would be furious at how Makari carried water for Hamas propagandists in its ongoing attempts to delegitimize Israel even at the height of the COVID-19 crisis. During an April 17, 2020 webinar, Makari falsely suggested that Israel was making it harder for Hamas to respond to the COVID-19 crisis by preventing the passage of badly needed medical equipment into the Gaza Strip.

During his talk, Makari used the COVID-19 crisis to inveigh against Israel’s blockade of the Gaza Strip, which has been the scene of thousands of rocket attacks into Israel over the past two decades. He asked his listeners to write to their “elected representatives in the Senate and the House, asking them to use their good offices to pressure Israel to end the blockade of Gaza so that Palestinians there can move freely to West Bank and East Jerusalem to gain access to medicine and medical supplies, health care, and other basis requirements.”

If Makari and the churches he works with have made any demands on Hamas or the Palestinian Authority in light of the COVID-19 crisis, he didn’t talk about them during the webinar. Instead of working as a peacemaker and a truth-teller, Makari behaves more like an anti-normalization activist in the West Bank, where, by the way, his parents work at the Diyaar Institute founded by Rev. Dr. Mitri Raheb, (who is something of an anti-normalization activist himself).

The way Makari told the story of COVID-19 in the Holy Land it, it sounded as if Israel is somehow at fault for the difficulties Hamas is experiencing in responding to the COVID-19 crisis, as if Hamas has not squandered millions of dollars in foreign aid on building attack tunnels into Israel that it could have spent on health care.

The way Makari told the story, it was as if Hamas hadn’t given the Israelis good reason to restrict the passage of goods into the Gaza Strip by firing thousands of rockets at Israeli civilians after Israel pulled 8,000 Jews out of the territory in 2005.

The way Makari told the story, it was as if Israel had not trained doctors in Gaza how to deal with the COVID-19 virus despite the fact that Gaza is controlled by a group that has declared the destruction of Israel as its goal.

The way Makari told the story, it was as if Israel had not recently facilitated the passage of more than 88 tons of medical supplies into the Gaza Strip in the course of one week, even as Hamas has imprisoned Palestinians who spoke via Zoom with Israelis about the crisis, accusing them of “treason.”

The way Makari told the story, it was as if Israelis and Palestinians in the Gaza Strip hadn’t — despite all the obstacles described above – started working together to prevent the spread of the virus, prompting Nickolay Mladenov, the UN Special Coordinator for the Middle East Peace Process, to praise Israeli and Palestinian authorities for their joint efforts to combat the pandemic.

In his statement, Mladenov, who has been very critical of Israel in the past, praised Israel for allowing badly needed medical supplies into Gaza and for allowing Palestinian health care workers into the Jewish state for training.

Miraculous news like this is just the type of thing Makari should have included in his presentation if he were truly interested in promoting peace and educating his listeners about what is really going on with COVID-19 in the Holy Land.

But, being the anti-normalization activist he is, Makari omitted it.

My grandfather would condemn Makari for carrying water for Hamas, but Makari is guilty of an even worse sin. With his one-sided and distorted narrative what is actually going on in the Holy Land, Rev. Dr. Peter Makari has obscured the demands and prospects for peace in the land.

It’s time for a rethink at Global Ministries.