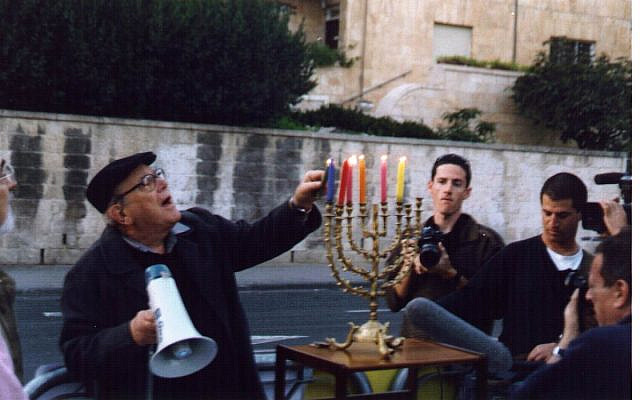 I dedicate this dvar Torah to the memory of Rabbi Zvi (Herb) Weinberg z”l, a friend and former chair of Rabbis For Human Rights who died last week.  I wrote a few words on Facebook on Friday, but returned too late to submit something to my blog. I am now writing in the middle of the night in the northern Jordan Valley, where I am spending the night in a field with Palestinian cattle herders who are regularly attacked here by settlers. They have been injured, and some of their cows have been killed.  I don’t know whether I am more horrified by the violence here, or the images of violence I am watching from the U.S. Capitol. At least here I can put my body between those being attacked and the attackers. Rabbi Weinberg, like our ancestor Jacob, eschewed violence, and the sowing of conflict.

In last week’s Torah portion we read Jacob’s parting words to his children. He says of Simeon and Levi that he does not want to be associated with their violence and wrath:

“Simeon and Levi are a pair; Their weapons are tools of lawlessness. Let not my person be included in their council, Let not my being be counted in their assembly. For when angry they slay men, And when pleased they maim oxen. Cursed be their anger so fierce, And their wrath so relentless. I will divide them in Jacob, Scatter them in Israel.”(Genesis 49: 5 to 7)

I am truly saddened by the death of Ahuvia Sandak, and extend condolences to his family. This sixteen year old member of the “hilltop youth” who have dropped out of educational systems to create new outposts in the Occupied Territories, died when he and his friends were trying to escape police who caught them throwing stones at Palestinians, and their car overturned.  It has been claimed that the car overturned because the police car chasing them nudged them off the road.

After I was attacked by a knife wielding settler in 2015, I angered some of my friends by arguing in court that his sentencing should be designed to rehabilitate him (while protecting others from him), rather than punishing him.   When I found out that he was a minor, I was truly saddened by the thought that a young person with his life ahead of him should have thrown away his opportunities.  My attacker has worked to get his life back on track. When I met with him through a “restorative justice” program, he had undergone violence therapy and left the Occupied Territories. He and his loving and supportive parents realized that he needed a different environment.  I wish him well, and hope that he realizes his aspiration to make a positive contribution to society.

That young man has made an effort to get his life back on track, but Ahuvia will not be able to do so. That is truly a tragedy.

I said at the time that my attacker should not have been on trial alone. On trial needed to be those who and inculcated in him a misguided worldview justifying violence, and those in our society who looked the other way, and remained silent. Not only has some of the right wing media remained silent as the hilltop youth have been injuring police officers and Palestinians in a wave of violence, but even the mainstream media has been interviewing friends and family who talk about Ahuvia and his friends as sweet youth admirably dedicated to the Land of Israel.  They have not been saying, as did Jacob, that they will not be found in the company of those engaged in wanton violence. We have not been hearing the voices of Palestinians who have suffered at the hands of the hilltop youth and other settlers. Nor have we heard from human rights defenders like myself, who have been attacked by them on many occasions, and are witnesses to their efforts to disposes and oppress Palestinians.

Parents, if you love your children, get them out of the hilltop youth! Educate them to love the Land of Israel, but not through violence and lawlessness. Even if you don’t agree with me that the holiness of the Land of Israel can lead to idolatry when it blinds people to God’s Image in both Jews and non-Jews, you can guide them to find other ways of settling the Land.  Rashi teaches that we can love our children, while condemning their actions,

“CURSED BE TIIEIR ANGER – Even when he was reproving them he did not curse them but their anger.”

True love entails being critical when necessary. A few years ago I heard a father tell how he got his son out of the hilltop youth with much love and determination. It is doable.

I know enough about police violence not to discount the possibility that the claim they criminally caused Ahuvia’s car to overturn is true. I wasn’t there, and I don’t know.  I support the call for an independent investigation not entirely in the hands of the police themselves.   However, it is infuriating the victimhood of those who think the police who so often side with the settlers only go after hilltop youth. The midrash teaches that those who steal from or murder non-Jew will eventually steal from and murder Jews (Tanna D’bei Eliyahu Rabah 28:1). Rather than consistently condemn administrative detention without letting the accused know what they are accused of, or torture or police violence, there are those who are only upset when it is done to Jews.  We need to be consistent, rather than say “How can they treat us like Palestinians?  Human right organizations I have been affiliated with have condemned unacceptable interrogation methods used in cases where we ourselves were the ones who had urged the police to find and prosecute the guilty party.

Even those who blame the police for Ahuvia’s death cannot ignore the reality of who the hilltop youth are. I have heard time and again in recent weeks that the hilltop youth live in a “complicated reality,” in which they must sometimes defend themselves against Palestinians who for some reason are angry because the hilltop youth are keeping the Palestinians from taking over the Land of Israel.  The fact is that, while they may not all be violent, violence is part of their culture. It is not self defence.  Being attacked in 2015 was not my only violent encounter with them. In none of the cases was I to blame. In April 2017 a band of them descended upon us from several kilometers away because we were accompanying shepherds who had been grazing their sheep in that area for many years, until the hilltop youth showed up. The army arrived to save us, and the hilltop youth ran back to throw stones at the army.

The next week, we were not so lucky, as this video shows.  I myself got away with “only” being hit over the head with an iron bar, and needing a stitch in my arm. Others were more seriously injured. I was present when settler shepherds from the Maoz Esther outpost where Ahuvia lived for a long time deliberately pursued the flocks of Ayn Samia, who had given up on much pasture land because of their new “neighbors,” and moved to grazing areas further away.  The Bedouin shepherds told us how when they tried to circumvent the hilltop youth by going around them through a wadi, Israelis would throw rocks on them from above….