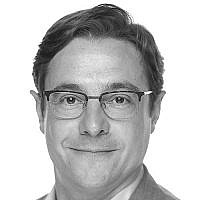 The Blogs
Dov Waxman
Gilbert Foundation Chair in Israel Studies at UCLA and Director of the UCLA Y&S Nazarian Center for Israel Studies
Apply for a Blog
Please note that the posts on The Blogs are contributed by third parties. The opinions, facts and any media content in them are presented solely by the authors, and neither The Times of Israel nor its partners assume any responsibility for them. Please contact us in case of abuse. In case of abuse,
Report this post. 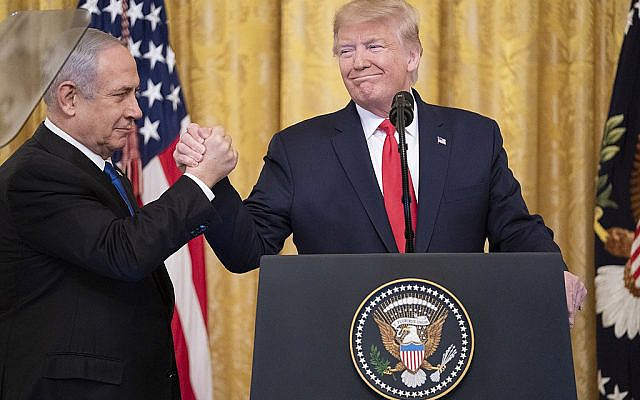 Recent polls show that Israelis strongly prefer President Trump to his Democratic rival, former Vice President Joe Biden. The reason for this is obvious. Many Israelis, specifically Jewish Israelis, think that Trump has been the most ‘pro-Israel’ president in modern times. That’s why he’s so popular in Israel—there are even city squares named after him and an Israeli settlement on the Golan Heights that bears his name.

It’s easy to understand why Israelis, especially those on the right, believe that Trump has been so good to Israel. Over the past four years, Trump has repeatedly professed his unswerving support for Israel and flaunted his friendship with Israeli prime minister Benjamin Netanyahu—who has often hailed Trump as the best friend Israel has ever had in the White House. Trump has also demonstrated his pro-Israel bona fides through a series of controversial actions, like recognizing Jerusalem as Israel’s capital and moving the American embassy there, recognizing Israel’s annexation of the Golan Heights, cutting U.S. aid to the Palestinian Authority, and introducing an Israeli-Palestinian peace plan that’s heavily skewed in Israel’s favor (for instance, by allowing Israel to annex a third of the West Bank and every Israeli settlement there).

However politically motivated these actions might have been for Trump—aimed at pleasing white evangelical Christians who are a key part of his domestic base—they have cemented Trump’s status as a great president for Israel, if not the greatest ever, as he likes to boast. Given his record in office, it would surely be preposterous to suggest otherwise.

But while Trump’s actions have undoubtedly been popular with Israeli Jews (and with Orthodox Jews and evangelical Christians in the United States), they mask the fact that Israel’s core national interests have actually been damaged by President Trump and his administration’s policies. Like much of what he has over the past four years in office, Trump’s ‘pro-Israel’ record is more spectacle than substance. He has ostentatiously bestowed Israel with gifts—which were also, if not primarily, political gifts to Netanyahu—while, in practice, he has undermined Israel’s fundamental needs, albeit inadvertently.

Take, for instance, the Trump’s administration’s one-sided approach to the Israeli-Palestinian conflict. By favoring Israel so much, and by trying to punish and pressure the Palestinian leadership, Trump has only angered and alienated Palestinians. Not only has he failed to deliver what he calls the “ultimate deal” between Israelis and Palestinians—the latter flatly rejected his administration’s long-awaited “peace to prosperity” plan—but he has also made a peace agreement even harder to achieve because he abandoned any pretense of the United States being an ‘honest broker’ in trying to resolve the conflict.

Forsaking the United States’ traditional role as a mediator between Israel and the Palestinians doesn’t serve Israel’s interests. It only invites other states, less committed to Israel’s security, to try to take on this role, and since no other state can really do this, it ultimately means that there’s no effective mediator to help resolve, or just manage, the Israeli-Palestinian conflict. And, as the conflict grinds on, and Israel’s 53-year military rule over Palestinians in the West Bank continues with no end in sight, growing numbers of Palestinians are giving up hope for a two-state solution to the conflict, and increasingly favoring a one-state solution that would mean the end of Israel as a Jewish state.

The Trump Administration’s hardline policy towards another of Israel’s adversaries, Iran, has also ultimately been detrimental to Israel’s interests. Withdrawing from the nuclear agreement with Iran and re-imposing American sanctions has pleased Netanyahu and hurt the Iranian economy, but it hasn’t forced the Iranian regime to capitulate and accept a new deal on American (or Israeli terms). Nor has it brought about regime change in Iran, as some may have hoped. Instead, it has bolstered Iranian hardliners and driven Iran to resume high-level uranium enrichment. Consequently, Iran may now have enough enriched uranium to build a nuclear bomb. And it’s now harder to stop them than it was four years ago, because the Trump administration has fractured the international coalition (comprised of the U.S., E.U., Russia and China) that the Obama administration had painstakingly assembled to dissuade Iran from pursuing its nuclear ambitions.

The Trump administration’s “maximum pressure” campaign against Iran has also failed to force Tehran to curtail its regional ambitions. Although the assassination of Qassem Suleimani, the long-time head of Iran’s Islamic Revolutionary Guard Corps and the mastermind behind Iran’s drive to expand its power across the Middle East, probably temporarily set back its regional activities, Iran has not been deterred from pursuing its drive for regional hegemony. On the contrary, by withdrawing most American troops from Iraq and Syria, and not responding to Iranian attacks against Saudi oil facilities, Trump has allowed Iran to expand its power in Iraq and Syria, and pushed Gulf Arab states closer to Iran as the United States is no longer viewed as a reliable ally. Moreover, the attempt to reduce America’s military presence in the Middle East, which began under President Obama and has continued under Trump, has allowed Russia and Turkey to expand their roles in the region, which is detrimental to Israel.

Domestically, President Trump’s effort to portray the Democratic Party as anti-Israel, and even anti-Semitic, in order to attract Jewish-American voters and donors has also damaged Israel’s core interests. By trying to make support for Israel a ‘wedge’ issue, Trump has undermined bipartisan support for Israel and exacerbated what was already a growing partisan divide over Israel between Democrat and Republican voters. In doing so, Trump has jeopardized the long-term future of the U.S.-Israeli alliance, which Israel still depends on.

In short, Trump has given Israel what it wants (or at least what Netanyahu wants), but he hasn’t given Israel what it needs: a peace agreement with the Palestinians, a contained Iran, and an alliance with the United States that is impervious to partisanship. Perhaps these critical Israeli needs cannot be satisfied by any U.S. administration. But even if that’s the case, President Trump has fallen far short of meeting these needs. No matter how ‘pro-Israel’ he proclaims himself to be, in reality his presidency has, overall, been harmful to Israel’s national interests.

To be fair, the Trump Administration did at least help bring about the recent normalization agreements between Israel, the United Arab Emirates, and Bahrain—albeit by offering to sell the Emiratis advanced F-35 stealth fighter jets that could set off an arms race and potentially undermine Israel’s military advantage in the region.

But the extravagantly named “Abraham Accords” have been misrepresented and over-hyped. They are not peace treaties, since Israel was never at war with either country. Nor will they usher in a new era of Middle East peace, as Trump has claimed. They will simply enable Israel to enjoy full diplomatic and commercial relations with two small, wealthy, autocratic sheikdoms, with whom Israel already had a long, not-so-secret relationship. While this is certainly good for Israel, it is hardly a diplomatic achievement like the 1978 Camp David Accords, which were brokered by a president (Carter) who’s been denounced as ‘anti-Israel.’ That landmark agreement brought peace between Israel and Egypt, who had gone to war five times, and neutralized what was then the biggest threat facing Israel. Isn’t that what ‘pro-Israel’ leadership should really look like?

About the Author
Dr. Dov Waxman holds the Rosalinde and Arthur Gilbert Foundation Chair in Israel Studies at the University of California Los Angeles (UCLA). He is also the director of the UCLA Y&S Nazarian Center for Israel Studies. He has had visiting fellowships at Oxford University, Tel Aviv University, Bar-Ilan University, and the Hebrew University of Jerusalem. He received his Ph.D. and M.A. degrees from the School of Advanced International Studies (SAIS) at Johns Hopkins University, and his B.A. from Oxford University. He is the author of four books: "The Pursuit of Peace and The Crisis of Israeli Identity: Defending / Defining the Nation" (Palgrave, 2006), "Israel’s Palestinians: The Conflict Within" (Cambridge University Press, 2011), "Trouble in the Tribe: The American Jewish Conflict over Israel" (Princeton University Press, 2016), and most recently, "The Israeli-Palestinian Conflict: What Everyone Needs to Know" (Oxford University Press, 2019).
Related Topics
Related Posts
Comments