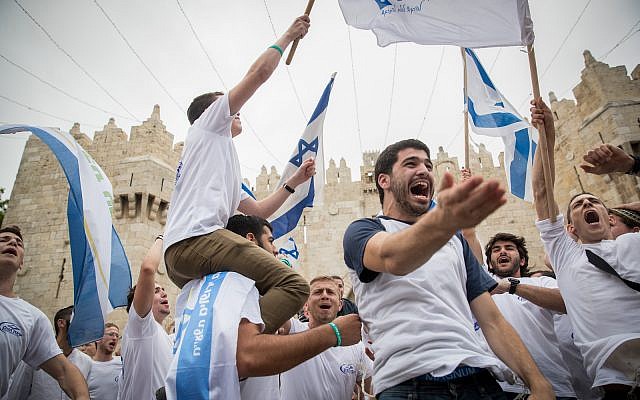 Jewish revelers wave Israeli flags as they celebrate Jerusalem Day by dancing through Damascus Gate on their way to the Western Wall. May 13, 2018. (Yonatan Sindel/Flash90)

The Israeli Democracy Index 2018 is brimming with fascinating statistics. It paints a picture of Israel as perceived by its citizens, slicing the information in various ways, one of which is along the axis of religious belief. This provides us with a high quality profile of the religious community. In what ways, if any, does the religious “tribe” differ from the rest of Israel’s citizens?

The data reveal a very strong association between being religious and a unique optimistic approach to many areas of our daily life. For example, the percentage of the religious who think that the country is in good or very good shape (88%) is double the figure for the secular (44%). Correspondingly, the percentage of pessimistic secular Israelis who think that the country is in bad or very bad shape is nine times greater than that of the religious (18% and 2%, respectively). The two groups seem to be living in two different realities.

When Israelis are asked to assess the situation of Israeli democracy, a majority of voters for the Jewish Home party (most of whom are religious) say that it is good or excellent (78%), significantly more than the figure for Likud supporters (65%) and very far from those who vote for Yesh Atid, the Zionist Union, and Meretz (26%, 20%, and 10%, respectively).

Has Israel reached the proper balance between the democratic and Jewish components of its identity?  Embarrassingly enough, the majority of supporters of all political parties respond to this question in the negative – except one: half of Jewish Home voters (51.5%) think that the current balance is just right. This places them miles away from supporters of United Torah Judaism (12%), at one end of the spectrum, who think the democratic component is too strong, and the Zionist Union and Yesh Atid (20% and 31%, respectively), at the other end, who think the Jewish component is too strong.

The religious are more likely to view society as more cohesive than are their fellow citizens. They also assess their legislators’ functioning more favorably: Whereas a majority of Israelis believe that most members of the Knesset do not “work hard and do their jobs well,” 62% of Jewish Home voters are pleased with Knesset members’ performance. They also have much greater confidence in the Knesset itself than the population as a whole (47% and 30%, respectively).

What is the deep reason for religious Israelis’ unique optimism regarding our national life?

Perhaps the key can be found on the practical level: The government’s major decisions, and developments in Israeli society fit well with the religious tribe’s priorities, help realize their view of the collective good, and fuel their optimism.

Another explanation might be found in the widespread perception of the rising status of religious Zionists in the Israeli social fabric. As they climb higher up  the ladder of national leadership, en route to the summit, they are – for the very first time – enjoying the  experience not just of being partners in the Zionist project, but rather being “master of the house”. Their growing hold in the country`s institutions – the IDF, the media, the legal establishment, the political arena– is translated into a positive assessment of the situation.

Another possible explanation lies on the theological plane: the religious see the state as a religious vehicle, “the first burgeoning of our redemption.” Most Israelis interpret the country’s situation in light of the mundane events reported on the news. By contrast, the Religious Zionists have been educated since childhood to adopt a long-term perspective that transcends history and is centered on the meta-narrative of the sovereign Israeli state as the realization of the prophets’ vision and the end of the long exile. The obstacles heaped up along the way and the hardships encountered are no more than annoying bumps on the road  that do not seriously impedes progress towards the long-sought goal. This faith-based view of our sovereign life is ipso facto optimistic. Not only does it charge the religious with energy, it also outfits them with rose-colored glasses.

Against this positive backdrop, what stands out is the religious sector’s discontent with the Supreme Court. Their confidence in the Court is very low – about a third of that reported by the secular (25% and 74%, respectively). By contrast, their trust in the government is unusually high, and three times that of the secular (64% vs. 21%).

Even if we assume that these wide gaps are rooted in past disagreements about court rulings on matters related to the State’s identity, it seems that the time has come for a change. The traditional single “religious seat” on the Supreme Court has been replaced by over-representation: today, more than a quarter of the sitting justices are religious. To this we can add the tribe’s very prominent representation in other branches of the judiciary and law enforcement – including the Attorney General, and the just-departed Police Inspector General. Indeed, the tribe seems to have a blind spot with regard to the judiciary.

It was the distrust of the Supreme Court that fueled the religious to push so strongly for the passage of the Nation-State Basic Law last summer. However, if many members of the tribe believe that the balance between “democratic” and “Jewish” is a good one, why was it necessary to enact a Basic Law defining the country’s identity that tore us apart? And why does the religious tribe refuse to enshrine the principles of the Declaration of Independence in a Basic Law?

These examples (along with many others) demonstrate that the religious tribe is not using fully its optimism as a constructive and inclusive force. Its prominence  carries with it a responsibility to make itself heard as a central, respectful, and confident voice that does not allow itself to be dragged into extremist territory. This is what Israel needs today.