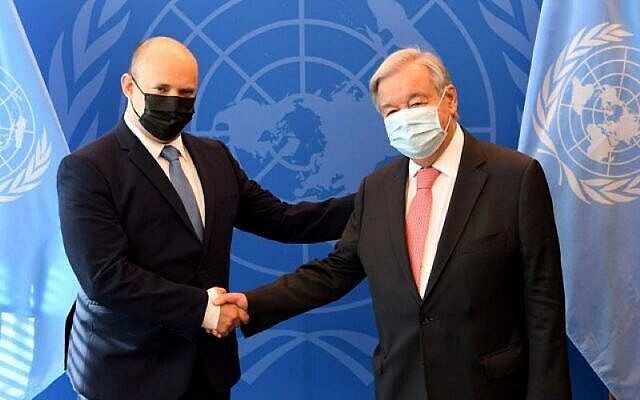 The new Israeli government is riding an international wave of goodwill despite the fact that it has made it clear that there will be no resolution of the conflict with the Palestinians during its term.  While Prime Minister Naftali Bennett is resolutely against a Palestinian state, Foreign Minister Yair Lapid isn’t opposed to the two-state solution on paper; he’s simply against implementing it. “Shrinking the conflict” has become the flavor of the month; resolving it has been shelved until some magical future time when peace-loving leaderships will miraculously emerge on both sides and jointly beat their swords into ploughshares.

Meanwhile, the new government continues to take advantage of the world’s euphoria over the inauguration of the post-Netanyahu era and is busy chalking up foreign policy achievements. Bennett got his moment in the limelight with US President Biden and Egyptian President Al-Sisi and held a “secret” meeting with Jordan’s King Abdullah which was conveniently leaked.  Celebratory events were held to mark the one-year anniversary of the signing of the Abraham Accords, underscoring the foolishness of early speculation that they would be leveraged to help the Palestinian cause. Defense Minister Gantz met with President Abbas but was quick to declare that their talks were limited to matters that serve Israel’s security interests.

The plight of the Palestinians was largely absent from the world stage as the UN General Assembly convened in New York for its 76th session. Not one word about it can be found in EU High Representative Josep Borrell’s blog on the flurry of European diplomatic activity around the annual UNGA gathering, nor was it mentioned in Chancellor Angela Merkel’s farewell appearance.  President Abbas’s lame threat to revoke recognition of the 1967 borders impressed no one, including the domestic audience that he is desperate to win over. President Biden repeated his support for a sovereign Palestinian state, but he declared it a long way off while adding that he is all for keeping “the possibility of progress” alive. Could he have set the bar any lower?

Bennett chose to ignore the Palestinians in his UN address, but careful attention should be paid to his remarks. He unashamedly boasted that the Israeli people “don’t wake up in the morning thinking about the conflict.” Attesting to their callous indifference to the human rights abuses that occur under their noses on a daily basis, Bennett said that all that Israelis want is “to lead a good life, take care of our families, and build a better world for our children.” Yes, and the Palestinians be damned. This is the Israeli reality that world leaders are enabling by embracing the Bennett-Lapid government simply for existing and making no demands of it regarding the occupation lest, heaven forbid, the government fall and Netanyahu come back to power.

But this indifference cannot endure. The events of last May, including the rampages that consumed Israel’s “mixed cities,” demonstrated how easy it would be for the region to descend into violence. If Israelis really want to take care of their families, they need to recognize that the occupation is a ticking bomb of their own making on their doorstep. And if there is to be a better world for our children, world leaders need to wake up to the fact that ignoring the occupation is not a sustainable policy.