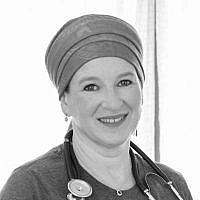 The Blogs
Sarah Seymour
Home Birth Midwife in Israel
Apply for a Blog
Advertisement
Please note that the posts on The Blogs are contributed by third parties. The opinions, facts and any media content in them are presented solely by the authors, and neither The Times of Israel nor its partners assume any responsibility for them. Please contact us in case of abuse. In case of abuse,
Report this post. 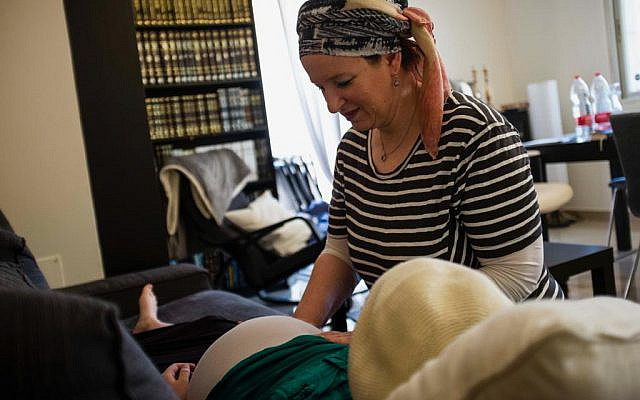 Of a total population of 9 million, there are only about 30 working Israeli homebirth midwives, between the lush Golan heights and the deserts of Eilat. We independent midwives are a curious breed, so let me tell you a little about how I got here and shed some light on my profession.

Growing up in suburban UK, I can recall only one of my mum’s friends being pregnant! It wasn’t the common experience that we have here in Israel. As a result, until the age of 19, when I started my degree in Nursing in Manchester University, I didn’t even realise that midwives were a ‘thing’. I knew about doctors and I knew about nurses, but that was about it.

When I had my first placement on the delivery suite in a hospital in Manchester, little did I know how that experience would shape the rest of my entire life. I had a huge, divine ‘aha’ moment whilst observing my first birth and from then on, I knew that midwifery was my calling.

I qualified as a nurse and moved quickly onto my midwifery training whist still in the UK.

Homebirth is considered very normal in the UK, as it is in many European countries and is deemed a safe option for low-risk mothers. (1) The autonomous rights of women during childbirth are also highly regarded in the UK. Therefore, any woman can choose to homebirth, even if she lives on a rocky outpost in the Outer Hebrides, or on a canal boat in deepest Yorkshire. The National Health Service will send a trusty midwife (on her bicycle perhaps…!) to attend her birth. Similarly, homebirth is so highly valued in Europe, that in The Netherlands for example, approximately 15% of births happen at home. (2)

It was in this environment that I developed as a midwife both in the hospital and in the community setting.

Fast forward a few years… Aliya, integration into Israeli society and raising a family. Who has time to study medical Hebrew, break her head (it was impossible) figuring out how to take the National Nursing exam and retrain as a midwife? I nearly let my life calling slip away. But the stars lined up for me (Hashgacha Pratis), a few angels nudged me in the right direction and I found myself retraining to get my Israeli midwifery license.

In the UK it is common for working mothers to take a 10-15 year career break whilst they raise their children and later-on enroll in a back-to-work program. That is not the cultural norm in Israel. Therefore, I found myself in the midst of my childbearing years, pregnant and with an Olah Chadashah’s basic Hebrew, working as a midwife in a large teaching hospital. It was my first real job in Israel. If that wasn’t brave, I don’t know what is. It was not only a lion’s den in terms of language, but also in terms of birth culture. The language came, but the birth culture didn’t.

I found myself trying to stand up for women’s birthing rights against the bossy doctors of this large hospital. It was not a task I excelled at with my slow Hebrew, and it left me in a constant state of turmoil. Let me present some common examples. Women wishing to adopt upright birthing positions being forced to lay on the bed with their legs in stirrups (as it was easier on the staff to deliver her baby that way). Women’s waters being routinely broken, to ‘speed things up’ despite it making labour more painful and not conferring any medical benefit. Healthy women being forced to have an IV placed in their arm, ‘just in case’ making them feel like a tethered timebomb that’s about to explode with a life-threatening complication. Separating babies from their mothers within less than an hour to transfer them to post-birth care. These interventions might be necessary in some high-risk pregnancies. But for a low-risk woman they are simply disruptive and unnecessary. (3).

These practices were repeated daily with every labouring mother that walked through the delivery suite doors. And it wasn’t just in that hospital, it was just the same in a the next hospital I worked in, perhaps worse! I was reprimanded by my boss when I refused to forcibly break a mother’s water against her wishes. In other words, the party line must be followed by midwives and labouring mothers alike, for the sake of the institution’s efficiency!

Of course I still loved my work! I bathed in the euphoric afterglow of each and every birth, I adored my fellow midwives and I did the best I could for my patients given the institutional constraints that were upon me. However, I knew there was more I could do… but I was stuck in the system. Yet it was just a matter of time.

The turning point came when I attended an International Midwifery conference in Europe. There I met a plethora of homebirth midwives, providing safe women-centered care in their home countries. I had become so used to fighting the hospital system in Israel that I had forgotten there’s a better way to serve women having babies. Research has shown time and again that women receiving midwifery care throughout their pregnancies (combined with medicalized care when relevant) have consistently better outcomes across the board. (4). Similarly, homebirth carried out in a safe manner, such as with a properly trained and equipped midwife taking care of a low-risk population, has a reliably low complication rate and excellent outcomes compared to hospital birth. (5).

During the European conference, I became really fired up about becoming a homebirth midwife. I conferred with various interested parties. Everyone (apart from my dear supportive husband) told me I was taking a huge risk and that it was ridiculous to even consider such a thing. How could I live with the guilt of a (G-d forbid) damaged baby? I reminded myself that babies are on occasion injured during a hospital birth. I am fully trained and equipped to deal with complications that occasionally arise. What if something did go wrong and a client sued me? Yes, this is a persistent concern, as there is no insurance in Israel for homebirth midwives. After fruitlessly searching, I did not find any practicable solution. I lean on my faith in Hashem, that I am but a vehicle for His Grand Plan. And I put faith in the families that I serve, that they fully understand and internalize the vulnerable position that I am in. I still choose to serve them despite the personal financial risks and they still hire me, knowing there is no insurance.

Having navigated the decision-making process, and come out the other side feeling super excited, it came time to start looking for homebirth clients. Handing in my notice at work was challenging! I was loathe to leave the security of a paying job for the unknown, but if I didn’t take the first leap, I would never know how far I could soar. I found a wonderful mentor who really believed in me and enthusiastic doulas referred potential clients to me. Before I knew it, I had 6 pregnant mothers lined up for homebirth and I handed in my final notice at work. 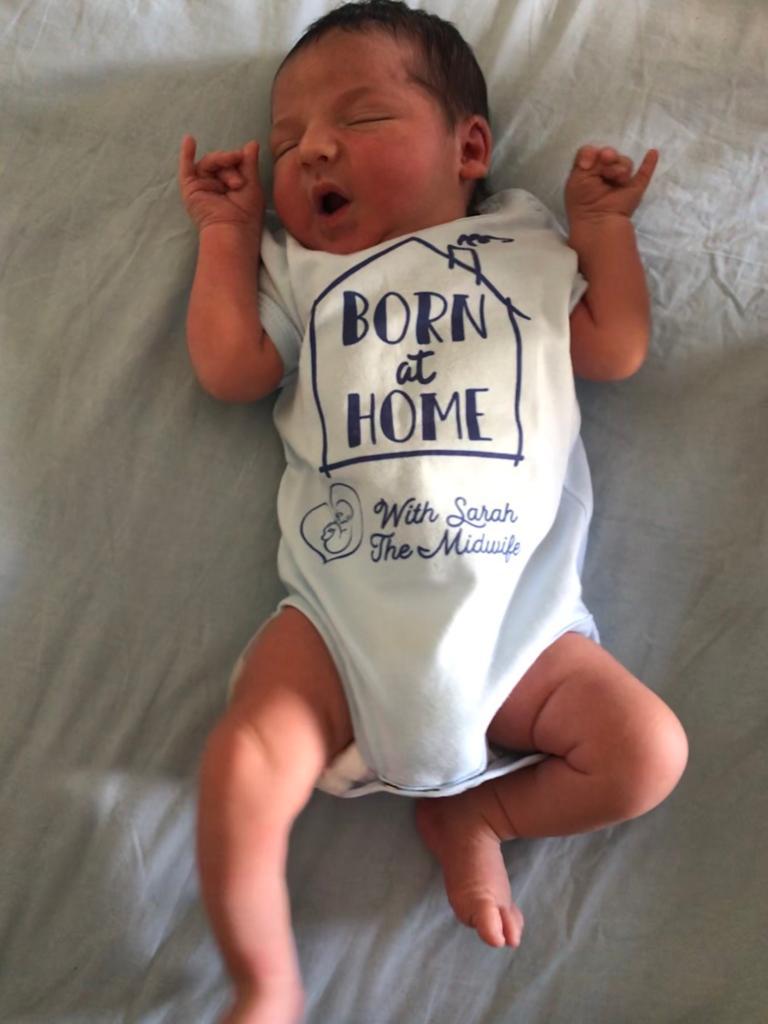 Life is very different when you are on call 24/7, but there are definite advantages. I only need to work on Shabbat if I have a birth, which is fairly infrequent. Previously I had a hospital shift every other shabbat, plus I always had to work on Chag, erev Chag, Chol Hamo’ed, Yom Ha’atzmaut and Purim, not to mention night shifts twice weekly. Births do come at random times, but overall, I am definitely happier with having more control over my work schedule.

Following the landmark Supreme Court ruling in July of this year, permitting the operation of Independent Birth Centers in Israel, I fulfilled a decades-long dream and opened the Midwife-led Binyamin Natural Birth Centre.  This functions to provide a home birth away from home for those it suits.

My work now is exceptionally satisfying. All potential clients are carefully screened for suitability for an out-of-hospital birth and they need to carry out routine blood tests and an ultrasound. Any pregnant mother with a current or previous serious complication is safer giving birth in hospital. The Ministry of Health published comprehensive Home Birth Protocols which I follow and I don’t undertake any risky births. My homebirth and Birth Centre clients meet with me multiple times before their birth when we discuss everything related to their pregnancy and birth. I counsel them on nutrition, health and preparation for parenthood. I take time to answer their questions. I teach mothers specific pregnancy exercises and optimal breathing for birth. By the time her birthing day arrives, the mother is ready for birth and there is excellent trust between us.

Importantly, the possibility of transfer to hospital is also discussed prenatally. Occasionally, a complication arises that can’t be resolved at home. This might require a transfer to hospital as the safety of mother and baby is always my top priority.  If it becomes necessary, transfer is dealt with in a calm and reassuring manner and I accompany the mother to the hospital.

I chose to provide a service for women looking for something exceptional. To discover their strengths, to grow through an empowered birth and not feel diminished or traumatized. I aim to provide a positive experience for the momentous occasion of their birth. Events surrounding birth have been shown to have long term effects that can affect a woman’s mothering for decades. Today’s educated, pregnant woman is no longer prepared to put up with patronizing care and instead she is demanding women-centered care and self-autonomy in birth.

Many pregnant women are in search of fulfilling this ideal through home or Birth Centre birth and are seeking out safe, licensed midwives to provide this facility. I for one am ready to step up to the plate, for the sake of long-term maternal health and for the right of women to choose. You may call me brave, you may call me crazy, but I know that what I am doing is a deep and powerful service for my fellow women.

About the Author
Sarah Seymour made Aliya from the UK in 2000 with her husband and children. She lives in Kochav Hashachar where she enjoys the rural lifestyle. Sarah has been working as a qualified midwife in the Jerusalem area since 2007 and transitioned to working exclusively as a homebirth midwife for the past 2 years. Sarah now owns and runs the Binyamin Natural Birth Centre where women can have a home birth experience in another setting. Sarah practices the UK model of maternity care which puts the mother firmly in the centre of her pregnancy and birth.
Related Topics
Related Posts
Comments