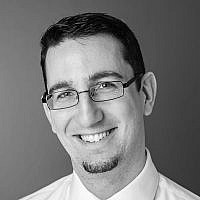 The Blogs
Raffi Bilek
Apply for a Blog
Advertisement
Please note that the posts on The Blogs are contributed by third parties. The opinions, facts and any media content in them are presented solely by the authors, and neither The Times of Israel nor its partners assume any responsibility for them. Please contact us in case of abuse. In case of abuse,
Report this post.

KVELLER VIA JTA — I have three children under 6 years old.

My rabbi is known to say that “life is not for wimps.” As a student in yeshiva (Jewish seminary school), I thought I understood his point. Now I really understand his point. Just surviving the daily and weekly routine is hard work.

My day starts long before the sun’s does and includes an hour of Torah learning, an hour and a half of praying, eight hours at work, and three hours in the car commuting (yes, it’s lousy). Then, of course, there’s eating (which I do too much of), sleeping (which I do too little of), and – it looms large – childcare. Certainly there are physical challenges to such a lifestyle (I don’t drink coffee, by the way), but I think the mental challenges even more so give rise to the “life is not for wimps” slogan.

As an Orthodox Jew, I inhabit a world in which Torah learning is king. “Torah study is equal to all the other mitzvoth (commandments),” proclaim the Sages. And so I rise each morning before it is even considered morning, according to Jewish law, in order to get in my daily dose of Torah. At the same time, my priorities have shifted over time and as my family has grown. Formal learning time at night is a thing of the past for me (and, I hope, a thing of the future). My wife needs help cleaning up, packing lunches, getting ready to start another daily cycle over. Then she needs time engaged in conversation with someone who is not her child, and not about her children. I don’t believe that “husband time” is a luxury, and I consider it an obligation just as I do any number of other obligations I fulfill throughout the day. (I don’t mean that I feel it’s a burden–I also believe that maintaining a healthy social life, for example, is an obligation.)

Yet the part of my daily routine for which I would say I am most “moser nefesh” – that is, the part that I put the most effort into ensuring it happens – is family dinnertime. For me, this means leaving work early to fight through an hour and a half of traffic and land in my chair at the dinner table as close to 6 o’clock as possible so that we can hope to get the kids in bed by 7 (after which I do another half-hour to an hour of work to compensate for having left early). It’s worth it. Kids thrive on structure and predictability, and this provides it for them. On days when I work late (about once a week), I don’t see my kids for a whole 24 hours, which I think is sad for all of us.

I think that this is what it means to be a Jewish father. We are obligated to educate our children. Actually, we are obligated to lechanech them, which, though usually translated as “educate,” really means something closer to “initiate” or “inaugurate.” Rashi, the famous medieval commentator, explains that when you lechanech something or someone, you start them on the path that they are to follow in the future.

Certainly I want my children to grow up learning and loving Torah–but even more than that, I want them to know that there is someone who loves them, and who will move heaven and earth to make sure they know it. Because if that awareness is part of their reality, if they know in their core that someone loves them, then they will also be able to know that Someone Else loves them, too. And if I can teach them that, then I know that my daily grind is producing an awful lot.

About the Author
Rabbi Raffi Bilek, LCSW-C, was born in Montreal and currently resides in Baltimore, MD. He is the director of the Baltimore Therapy Center, director of the Montgomery County Abuser Intervention Program, and director of K'nafayim, a nonprofit dedicated to providing family services for the Jewish community of Baltimore and beyond.
Related Topics
Related Posts
Comments