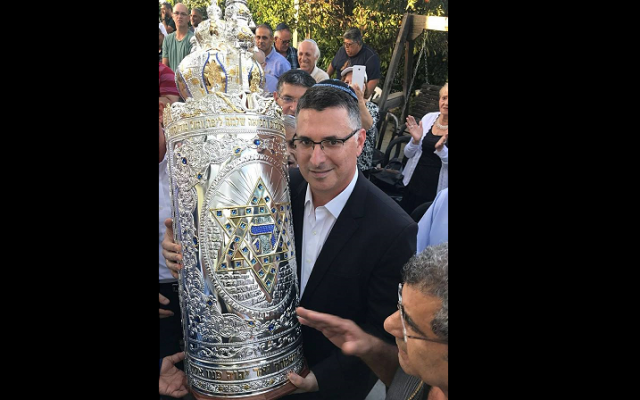 Friends have been asking me why Gideon Sa’ar over Bibi?

Most people are not aware that Sa’ar is a Ba’al Tshuva. He keeps Shabbat.

But he is not outwardly “Orthodox,” which makes him palatable to people from all walks of life.

But being a ba’al tshuva and also being the former Minister of Education, he knows the right buttons to push in order to make the education system in Israel more “Jewish”.

Not necessarily religious, not haredi, not “old school zionist”…but Jewish.

While Minister of Education, Sa’ar created a program to bring ALL secular school kids on trips to places like Hebron, Beit El, Shiloh. The cradle of Jewish civilization.

If we are to annex Judea & Samaria, the next generation needs to know why that’s even a necessary thing to do (apart from strategic/security reasons).

So now you’re creating a generation of Yehudim…instead of “Israelis”.

We’ve already played the international game to a tee. Bibi was a master at it. But he failed in his main mission. A mission that the Lubavitcher Rebbe set out for him: to be the guy to hand the proverbial “keys” to Moshiach.

I liken Bibi to Noah. He has the knowledge of G-d but didn’t tell anyone else about it.

Now Eisav (Trump…Boris Johnson…Bolsonaro…etc) is telling us “what’s yours is yours”.

Ok…but why is it ours? Because a bunch of crazy knit-kippah people say it’s ours? (i’m one of them. 😉 )

No. It’s ours because the Torah says it’s ours.

Ok…so then what is this mysterious Torah you speak of? Why is the Torah relevant? Why is this Land or more specifically, gorgeous mountain range, relevant?

Is it “Palestine” or is it the Cradle of Jewish Civilization?

If so, how/why? Are we the same Jews today as the Jews who lived in these places?

This is perhaps the conversation we should be having. Maybe the only conversation. Because it all goes back to the beginning.

There’s is no other raison d’etre…really.

I remember being on the Birthright trip in 2007. We were taken to places like Tel Aviv and shown Ben Gurion’s house…and then Bahai Gardens in Haifa.

All I could think was: “ok but where’s the JEWISH stuff”. I didn’t mean Bnei Brak or Mea Shearim. I was looking for something else.

I couldn’t put my finger on it but I definitely felt like something was off.

Even at Masada, all I could think was: “ok a bunch of guys committed suicide in a cave, to sanctify G-d’s name…but how does that make us relate to our heritage? If anything it sounded oddly similar to something Al Qaeda would do.”

Would any of us American Jewish kids take our own lives to sanctify G-d’s name? How is any of this relatable to people with no concept of Torah or G-d? What does any of this mean?

At the time I lacked the language or knowledge to ask the question.

Today, if you come up to any secular Arab kid on the street, they can recite to you Koran verses.

Come up to any secular Israeli kid in Tel Aviv, heck if they know the Shema.

Again, we’re not talking black hats or cholent or kugel.

Just something as simple as the Shema and then the few verses after it…until it the part where it says ‘HaShem Eloheichem Emet’ in the siddur.

I couldn’t recite that until age 30 because the Soviet Union took away my heritage and in America I was too busy with “life”.

But in the case of Israelis, we have to wonder “what’s their excuse?” (there’s an answer to that question, but it’s a separate and very long explanation.)

Isn’t that so sad? But it can change in one generation.

The world has been waiting since 1967.

Notice, back then, when we took back Jerusalem and Judea & Samaria and the Golan…no one said a word. No one batted an eye.

And we never stood up. If anything, most of us went to sleep.

And nearly 53 years later,  90% of Jews are zzzzzzzzzzzzzzzzz. (I include so-called Jewish organizations and even pro-Israel zionist orgs.)

About the Author
Born in Ukraine and grew up in the NYC metro area. After working as a trader on Wall St. for 8 years, made aliyah in 2010. After living in Jerusalem, Tzvi returned to NYC and started a company to import boutique wines from Judea & Samaria. He uses his business and my website TheNationofIsrael.com as a vehicle educate young Jews about Israel, the Middle East and Judaism. His ultimate goal is to return to Israel and inspire young Russian-speaking Jews in the US to make aliyah.
Related Topics
Related Posts
Comments