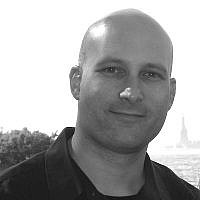 The Blogs
Michael Lipiner
Apply for a Blog
Please note that the posts on The Blogs are contributed by third parties. The opinions, facts and any media content in them are presented solely by the authors, and neither The Times of Israel nor its partners assume any responsibility for them. Please contact us in case of abuse. In case of abuse,
Report this post.

Kirk Douglas has passed away at the ripe age of 103. Since 1964, The Douglas Foundation has continued its commitment to philanthropy by making significant contributions to many civic and charitable causes. This includes the building of playgrounds and community centers in Israel, and a theater directly opposite the Wailing Wall in Jerusalem.

In 2004, nearing their 50th wedding anniversary, Kirk and his wife of many decades, Anne, renewed their marriage vows in a ceremony officiated by Rabbi David Wolpe in Beverly Hills in a traditional Jewish ceremony under a rose-adorned Chupah.

Many remember him as a dimple-chinned, virile, and attractive actor, but few know the man behind the Hollywood iconic image. Kirk was born Issur Danielovitch on December 9, 1916 in Amsterdam, New York to poor, Jewish Russian immigrants. He grew up as Izzy Demsky with six sisters and always had to support himself working odd jobs while defending his Jewish identity. “I was six-years-old when I had my first contact with anti-Semitism. I came home from school one day with a bloody nose, crying to my mother. ‘Yanak hit me!’ ‘Why?’ my mother asked. ‘He said I killed Jesus Christ.’ ‘What? You killed who?’ ‘I didn’t kill him. I don’t even know who he is.’”

Although he attended Hebrew school and was even considered for rabbinical studies, Kirk always knew he wanted to be an actor. “I wanted to be an actor ever since I was a kid in the second grade. I did a play, and my mother made a black apron, and I played a shoemaker. And my father, who never interested himself in what I was doing, was in the back, and I didn’t know it. After the performance, he gave me my first Oscar: an ice cream cone. I’ve never forgotten that.”

In 1935, Kirk received a wrestling scholarship to Saint Lawrence University in upstate New York where he studied drama. Upon graduating in 1939, he won another scholarship to the American Academy of Dramatic Arts in Manhattan, where he began acting on Broadway. During that time, when Jews were not as accepted by American society as they are today, Kirk adopted the more standard moniker he had used in college while doing summer stock productions.

In 1941, Kirk enlisted in the U.S. Navy, where he served in the Pacific as a communications officer with an anti-submarine patrol. He said that the war had always haunted him: “It bothered me to imagine young Japanese sailors deep in the ocean crowded on a submarine. They were looking to kill us, we were looking to kill them.” In the interim, Kirk married acting classmate Diana Dill in 1943 and they had two sons: actor Michael and producer Joel. One year later, Kirk was medically discharged with the rank of lieutenant following injuries.

After the war, Kirk returned to Manhattan and worked in radio, theatre, and commercials. It was Lauren Bacall (Kirk’s former acting classmate) who convinced producer Hal Wallis to cast him in the film The Strange Love of Martha Ivers (1946). Kirk would develop a “tough rogue” image all the way through his Oscar-nominated title role in Champion (1949).

Perhaps these ruthless, aggressive roles weren’t foreign to Kirk. “I will never forget my first bloody nose. It always reminds me of why I’m proud to be a Jew.” He also sought out gentler roles that showed his versatile acting skills, which included Tennessee Williams’s The Glass Menagerie (1950). In 1951, he divorced before being nominated for Oscars in both of Vincente Minnelli’s films: The Bad and the Beautiful (1952), and Lust for Life (1956) portraying Vincent Van Gogh.

In 1954, he married German-American film producer Anne Buydens. Together, they had two sons (Peter and Eric) and formed one of Hollywood’s first independent film companies, Bryna (named after Kirk’s mother). In 1958, Kirk’s alma mater awarded him a Doctor of Fine Arts degree. In that same year, he daringly hired Hollywood blacklisted Dalton Trumbo to write the Spartacus screenplay, which he also publicly announced. Kirk was widely condemned at the time but praised 30 years later by the American Civil Liberties Union and Writers’ Guild of America, which recognized his act as courageous. Only one week into shooting, Kirk fired director Anthony Mann after a major falling out and demanded that Stanley Kubrick (with whom he had previously filmed Paths Of Glory) be hired. As a metaphorical attack on McCarthyism and HUAC (House of Un-American Activities Committee), the critically acclaimed Spartacus earned several Oscars.

In the 1960s, Kirk continued to remain politically active. On behalf of the State Department and the U.S.I.A., he toured around the world and was lauded by Presidents Kennedy and Johnson. In 1967, he served as Public Affairs Director of the U.S. Olympic Committee (and was awarded a Presidential Medal of Honor in 1981 by President Jimmy Carter). Kirk’s sociopolitical messages were also conveyed in his films, including the powerful Seven Days in May (1964).

Although Kirk had to hide his Jewish identity, at least while growing up in an anti-Semitic neighborhood, he relived Israel history onscreen first as Colonel David ‘Mickey’ Marcus in Cast a Giant Shadow (1966). Kirk portrayed the real-life American Army officer recruited as commander of the fledgling Israel Defense Forces just as the War of Independence broke out. In 1976, he starred in the TV movie, Victory at Entebbe, about the infamous Air France flight that was hijacked by the PLO.

In 1988, Kirk published his autobiography and subsequently wrote three novels and two children’s books. In 1991, he received a Life Achievement Award from the American Film Institute. Unfortunately, in 1995, Kirk suffered a nearly fatal stroke that left him paralyzed and greatly affected his speech. Two years later, he published Climbing the Mountain: My Search for Meaning, in which he discussed surviving a helicopter crash that accounted for his religious awakening. Kirk began studying the Torah and visited Israel. “It is a tragedy that the secular Jews here do not see the beauty of the religious world, and that the religious do not see the beauty in the secular world. The depth of your piety is not measured by size of your skullcap or the length of your peot [earlocks] … I feel very close to Israel.”

In 1996, Kirk was awarded a lifetime achievement Oscar. He worked diligently with a speech therapist and two years later returned to the silver screen in Diamonds, followed by an Emmy-nominated, guest starring role in television’s Touched by an Angel (2000). What is more, in 2003, a family reunion of sorts presented an opportunity to star alongside his son, Michael, ex-wife, Diana, and grandson, Cameron, in the comedy-drama, It Runs in the Family.

“I’ve lived a long time. Almost 97 years. I’ve seen a lot of fear-mongering, bigotry and discrimination. But now I’m also seeing a modern generation of children who view the world very differently than their parents and grandparents. For them, no amount of teaching will make them hate people simply because they’re different. That gives me hope.”

About the Author
Michael Lipiner teaches English Language Arts and communications. A native New Yorker who lives in Israel, he is also a published author/playwright and a professional musician.
Related Topics
Related Posts
Comments