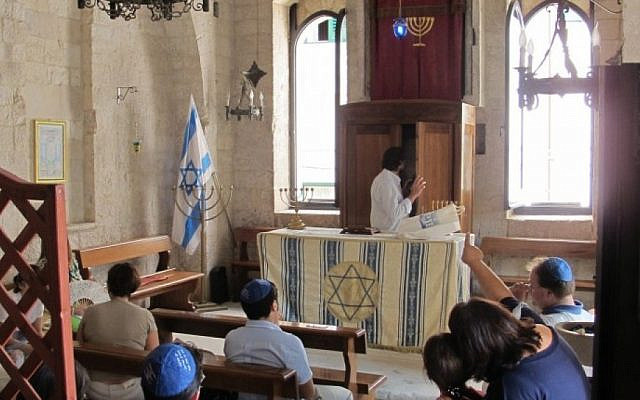 Used for centuries as a church, the former synagogue in Trani, Italy, has returned to its original role as a Jewish house of worship. (Ruth Ellen Gruber/JTA, via The Times of Israel)

The young woman who came to me was clearly nervous; she twisted a tissue in her hands and trembled when she spoke. It didn’t take long for the tears to flow, especially when she related the treatment she had received from a rabbi with whom she had recently met.

“It took all my courage to speak with him,” Emma (not her real name) said. “For years, I’ve had this affinity to Judaism. That’s because I grew up with a grandmother who taught me about our family’s Jewish roots. Our family had been Catholic, but there were stories about how our Jewish ancestors escaped from Spain during the Inquisition. So I went to the rabbi. I said, ‘I know I have legitimate Jewish roots, but I feel like an imposter.’ The rabbi responded that he understood about my imposter feelings. ‘You feel like an imposter because you are!'”

The rabbi went on to explain that 500 years ago Jews like Emma’s ancestors had a choice. Either they could submit to forced Christian conversion or they could remain Jewish and face an “auto-da-fe,” which meant being burned alive in the public square. Because Emma’s ancestors had chosen forced conversion, they and their descendants had effectively renounced Judaism and now were considered apostates.

According to the rabbi, Emma’s “imposter syndrome” feelings were legitimate, but not for the reasons you might think. Emma couldn’t be considered Jewish because her ancestors had accepted Christianity. The Jews who refused adult Christian baptism were killed. Emma’s ancestors who qualified as authentic Jews, said the rabbi, were the dead ones.

First described nearly 50 years ago by psychologists Suzanne Imes and Pauline Rose Clance, the term, “imposter syndrome,” was first applied to graduate students who doubted their abilities and obsessed that deep down they were unqualified and undeserving of the positions they held. These students worried that eventually they would be discovered as frauds by those around them.

In recent years, “imposter syndrome” has found its way into the Jewish community, where Jewish converts, who, after having successfully completed course work, synagogue observance, an examination before a beit din (rabbinic court), and a ritual “mikveh” immersion, still felt that they were not authentically Jewish.

Today, rabbis have begun to take the situation seriously, like Rabbi Rochelle Tulik who addressed the problem head on. In an Erev Rosh HaShanah sermon (5782), titled “You are NOT an imposter,” Rabbi Tulik had this to say about the feelings of inadequacy that often plague newly minted Jews: “The most challenging nature of imposter syndrome is that it is often most strongly triggered when we actually feel we are in a place where we DO belong. Or when we feel that we have a right to be there. But then doubt kicks in.”

Given the fragile nature of Jews who have recently made conversion, imagine the fear and trepidation that someone like Emma felt — a young woman who desperately wanted to connect with her lost Jewish roots.

As a rabbi of a b’nei anusim synagogue here in Calabria, Italy and director of a cultural center whose mission it is to remove these imposter-like obstacles, I welcome men and women like Emma who want to claim their Jewish heritage — especially those (like myself) who have suffered the all too common slight, “You can’t be Jewish. You’re Italian.”

Jews by Choice often worry that they will be “found out” — that someone will call them out for not belonging, for not being Jewish enough. B’nei anusim like Emma, who attempt to connect with the long lost Judaism, not only fear that they don’t belong, but those fears are often confirmed by a Jewish hierarchy that all too often dismisses b’nei anusim out of hand. Or, as Emma described it, “Feeling like an imposter is bad enough. Being treated like an imposter is worse.”

Within the Jewish community, the issue of anusim related “imposter syndrome” has begun to command attention by some Jewish professionals, comparing Jewish imposter syndrome to a “dybbuk,” or a dislocated soul. Indeed, in an article in The Forward, John Kunza writes, “I identified as being Jewish since a very young age… Be it born with a Jewish soul, or lost Jewish lineage in my family tree… I always knew that I was a Jew before fully knowing what it meant to be Jewish. My soul was at Sinai and there was no way of escaping that.”

Emma and so many others like her who have discovered their lost Jewish heritage represent a unique opportunity for established Judaism. When we understand that imposter syndrome is a part of b’nei anusim baggage, we can take action to alleviate the stress. We can become less skeptical and instead acknowledge to b’nei anusim that they are not imposters. Instead, their attraction to Judaism, which has deep roots in ancient Spain, Portugal, Sicily, Italy, and beyond, is a gift to be treasured, rather than a problem to be solved.

About the Author
Rabbi Barbara Aiello is the first woman and first non-orthodox rabbi in Italy. She opened the first active synagogue in Calabria since Inquisition times and is the founder of the B'nei Anousim movement in Calabria and Sicily that helps Italians discover and embrace their Jewish roots
Related Topics
Related Posts
Barbara Aiello