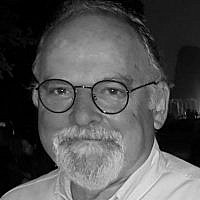 The Blogs
Menahem Fogel
Apply for a Blog
Please note that the posts on The Blogs are contributed by third parties. The opinions, facts and any media content in them are presented solely by the authors, and neither The Times of Israel nor its partners assume any responsibility for them. Please contact us in case of abuse. In case of abuse,
Report this post.

I received many requests from readers to write about Jewish life, such as there is, in the UAE. So here goes. There is a Jewish community in the UAE. They are all foreign nationals. I am told they number about 2000 people countrywide. There is an official chief rabbi for the United Arab Emirates, Rabbi Yehuda Sarna, a professor at New York University. He came to the Emirates as a visiting professor on the New York University campus in Abu Dhabi. He reached out to the small Jewish community in Dubai, and later on was appointed chief rabbi of the UAE. He is also the government’s adviser regarding the building of the Abrahamic Families Center, a vision of the UAE president that will include a mosque, a church and a synagogue. He comes to the UAE for community needs several times a year, but is not a permanent resident of the Emirates.

The rabbi who is a resident of the UAE is Rabbi Levi Duchman. A young, single, Chabad Hasid, who came to the UAE some years ago and established a synagogue in his villa in Dubai near the city center, where – in non-COVID times – regular minyanim are held on weekdays, Shabbat and holidays.

In another area of ​​Dubai, until some weeks ago, there was another synagogue, an older one, in a private villa – known as “The Villa” synagogue – serving the Jews who lived in that area of ​​Dubai. A distance of about 8 kilometers separates the two synagogues. However, this synagogue was recently closed by the authorities. The members have applied to reopen it in a location close to ​​the Dubai Marina. Let’s hope for the best.

There is also kosher catering in Dubai – Elli’s Kosher Kitchen (www.elliskosherhitchen.com). Elli Kriel, her husband Ross and their three children are a religious Jewish South African family who relocated to Dubai following her husband’s work in the international energy industry. This is what Len Judes, President of the Israel-Lithuania Chamber of Commerce, wrote about her in a Facebook post:

“In November 2018 Elli completed her doctorate in sociology (“Observing Inclusion and Exclusion in Society: How Identity and Belonging Underlies the Experience of Inclusion and Exclusion of Minority Communities”), and considered continuing her life in the academic world. But then her husband told her that a delegation of rabbis was about to attend a conference in Abu Dhabi – and that they needed kosher food. The conference organizers turned to Ross and asked for his help in finding catering that would be to the satisfaction of the rabbis. Of course, there was no such thing in the UAE at the time. An idea occurred to Ross that Elli would cook for the rabbis, and so it was. “I flowed with it spontaneously. I opened cookbooks and learned from them. I discovered that Spanish Jewish cuisine was very similar to Greek cuisine, which I grew up on. Then more orders began to arrive, and I suddenly realized it was a potential business, not a one-time project,” she recalls.

The second major event for which she prepared kosher food was the Tolerance Conference, held in Dubai and attended by the Pope – and a number of rabbis from different streams of Judaism. The rumor spread by word of mouth. Elli began receiving many requests from Jewish families on missions in Dubai, as well as from kosher Jewish tourists, who visit the Emirates on both organized trips and honeymoons.

What characterizes your kitchen?

“Western tourists want to experience what the local cuisine has to offer, so I make kosher versions of the Emirati cuisine. Foreigners who have moved here long for the flavors of Eastern European Jewish cuisine – so I put that on the menu. Many Jewish tourists who come here are of Moroccan and French descent. The dishes are in the Greek style, which I prepare according to what I tasted in the house where I grew up. “

What is the next step?

“I am about to publish a book of kosher recipes sponsored by the Government Office for Tolerance of the United Arab Emirates. I am about to come out with a new brand of kosher baklava made in Dubai, and I have also started selling challah covers, made from a traditional Emirati fabric called Sado.”

What are your expectations of the peace agreement?

“I have hope that the peace agreement will pave the way for positive developments in the region. The peace agreement marks the opening of a new era, which I hope will find solutions for Palestinians and Israelis alike. I can offer Israelis visiting Abu Dhabi a home away from home. Israeli tourists are important. Now, they can travel the Emirates and stock up on my food, thus saving themselves the logistics of carrying kosher food all the way.”

So, there are solutions in the UAE for kosher food everywhere. By the way, supermarkets also have products with well-known kosher symbols from the US, England and South Africa, as well as products that appear on rabbinical kosher lists in France, Belgium, Australia, and other countries. And a trip to the Emirates does not have to – and shouldn’t – be limited to Dubai only, although Dubai is definitely the crown jewel.

And on this subject I have two more suggestions, even if you are only visiting Dubai. Head over to Sharjah, the neighboring emirate to Dubai, just a 20-minute drive away. Sharjah is much more “religious” than Dubai. There is no sale of alcohol at all in Sharjah. The dress is more traditional – both men and women. There is more presence of mosques. But in Sharjah, as opposed to Dubai, the local culture is more prevalent. It is modern, but preserves its ancient culture. The small old town of Sharjah still stands complete, well preserved and in good condition. It’s beautiful. It’s markets look like markets and not like malls that simulate markets. It’s clean, tidy, welcoming. When I got to Sharjah I felt relaxed. The pressure of Dubai’s GO GO GO had faded. Everything is comfortable. I really don’t like the word “authenticity” but it’s the word that best describes Sharjah.

Finally, it is impossible to leave here without visiting the desert. The Emiratis are inherently desert people, for hundreds upon hundreds of years. And visiting here without going out into the desert would be a serious miss. The desert here is magical. The dunes move all the time – even while you’re looking at them. The winds blow and the sands fly and land somewhere else and all of a sudden the dune has moved location. And the sand is very soft. I went out into the desert in my host’s jeep and at a rift on one of the dunes, the jeep began to sink. Of course, the driver hit the gas pedal in an attempt to quickly get us moving, but that just caused us to sink even more until the undercarriage of the jeep rested on the sand. The driver called a tow service, but he missed the exit from the road to the desert and had to drive another 20 minutes until he could make a U-turn. On his second attempt to reach us he missed again and by the time he finally reached us two Bedouin passing by in jeeps saw us, and all together they hauled us out us successfully and quickly. We continued the trip to see some camel farms including those of the ruler, until we reached a beautiful desert camp where there are activities galore and wonderfully entertaining shows, and where you can also have a delicious kosher barbecue dinner.

Seven days were enough for me to fall in love with this destination just as I fell in love with Japan. Anyone who knows me, knows ,that for me, that says everything.

About the Author
Born in Jaffa, Rabbi Menahem Fogel’s wide ranging career has spanned nineteen countries and includes both the public and private sectors. He has been a pulpit rabbi in South Africa and Canada, a Museum Information Systems Designer for renowned museums on three continents, produced a TV series for Dutch Television, a hotel manager in the Middle East and continues to be an in-demand tour guide throughout the Far East, Africa, Latin America, the Pacific Northwest and the UAE.
Related Topics
Related Posts
Comments