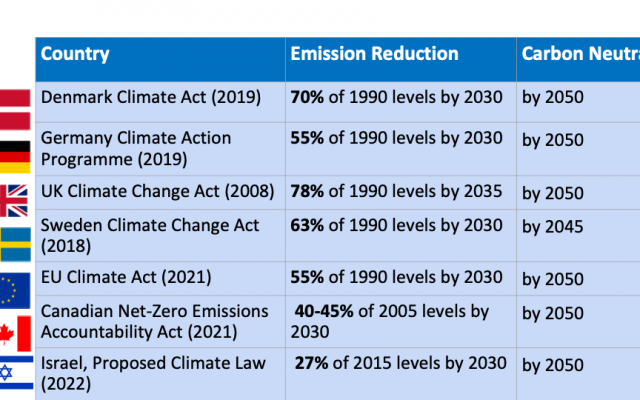 In one of its final votes last week, the 24th Knesset approved an initial reading of a proposed Climate Law, submitted by the minister of environment. Eagerly anticipated for more than a decade, the law is supposed to serve as a centerpiece of the government’s climate strategy. It should have been a triumphant moment for local environmentalists. Only it wasn’t. In fact, the bill serves as a sober reminder of how politically weak our environmental ministry is – and how little we seem to care about our children’s future.

Historically, Israel was always an underachiever in addressing the climate crisis. In 1992 when the international community agreed on the need for a UN framework climate change convention, Israeli delegates quietly signed up as a developing nation. This dubious designation enabled us to evade any expectations to meaningfully reduce our greenhouse gas emissions for decades. Finally, in 2015, as a new OECD member, the Netanyahu government realized that it could not be the only wealthy country to opt out of global efforts to address the mounting crisis.

And so, seemingly like all the other countries in the world, Israel’s government submitted an NDC (national action plan) just prior to the UN’s 2015 Paris climate convention. Unfortunately, the blueprint was both minimalistic and disingenuous. In terms of actual commitments, our emissions targets were framed in “per capita” units. This obfuscated the fact that our greenhouse gas releases would actually increase because the population is growing so quickly. And even so, we did not come close to meeting the action plan’s other modest goals (such as moving 20 percent of private transport trips to public transportation or achieving 10% renewable electricity by 2020). If any government ministers were even aware of the country’s pathetic performance, they surely showed no signs of regret.

Hopes were high, therefore, when the “Change Government” took the reins of power in 2021. Soon thereafter, the latest UN climate gathering in Glasgow offered an opportunity to up our game. The cabinet seemed to respond enthusiastically: then-prime minister Bennett promised the world that by 2050, Israel too would be a “carbon neutral country” with zero net emissions.

It is always easy to make pledges that come due 30 years hence, when it is our children who will have to foot the bill. Unfortunately, for the foreseeable future, Government Decision 171 only commits to reducing Israel’s collective emissions by 27% in 2030. This constitutes an extremely modest emissions target relative to other developed countries, most of which expect to cut their emissions by more than half over the next eight years. Indeed, it is the lowest commitment of any OECD nation.

Nonetheless, it can at least be seen as an important shift away from “per capita” to “absolute reductions.” For the first time, we acknowledged that the atmosphere does not really care about Israel’s idiosyncratic demographic dynamics: the higher the concentration of carbon dioxide in the air, the higher the earth’s temperatures will rise. Everyone needs to absolutely cut their greenhouse gas emissions… now.

In climate policy, the international community has always known where it needs to go. The devil invariably is in the details. And so many of us were heartened by the outgoing government’s platform, which called for the enactment of a Climate Law. After enjoying the self-congratulatory euphoric glow of Glasgow, a climate bill became the chief objective of the minister of environment and her dedicated staff.

Now there’s no question that the ministry’s team really did try to produce a statute that would push Israel beyond its historic role as a climate slacker. But when the dust settled, after months of stalemate with the ministry of finance economists and the ministry of energy technocrats, the results were mightily disappointing: the law retains the government’s 27%, 2030 emissions reduction goal. But its drafters were apparently embarrassed to state such a low target openly. Hence, while the 2050 zero-emissions commitment is promulgated, proud and prominent, the 2030 objective is hidden from legislators (and the world) to see. It only appears as an oblique reference to the arcane government decision.

Besides the humiliating aesthetics, there is also a problematic substantive implication: if the government wishes to weaken its carbon emissions objectives, it can do so at will. Unlike other climate laws, like Sweden or Germany, where emission targets need to be approved in the open and democratically by the Parliament, the Knesset is simply left without an oversight role in the government’s climate policies.

My subcommittee on Environment, Climate and Health convened hearings about the proposed law when it was first published. We learned from the Finance Ministry that, in fact, it opposes the 2030, 27% reduction goal, as unrealistic, even though countries like Denmark, are pledging a 70% reduction. That’s because they see Israel still as an “energy island” with a rapidly growing population. The best they think we should hope for, therefore, is a 21% cut by 2030 – despite the world’s scientists’ urgent call for a much more dramatic transition.

It is not difficult to imagine what such a narrow, economic pessimistic perspective would have said about Israel’s bold transformations of the past, from adoption of solar water heaters on roofs in the 1970s to desalinated water 40 years later. The definition of a cynic is someone who knows the cost of everything and the value of nothing. But for those who care about the planet’s future, there is no room for cynicism if we are going to win this battle for climatic stability.

There are many other problems with the proposed law: the statute’s primary operational tool is a national climate plan which the Ministry of Environmental Protection is supposed to coordinate. But the law specifically makes participation in the national strategy by other ministries “voluntary”: if an agency chooses to submit a greenhouse gas reduction plan — well that’s great. And if not: “No problem.”

This raises the broader question of the sagacity of appointing Israel’s environmental ministry as the lead agency in overseeing Israel’s climatic agenda. Other countries, like Denmark and Australia, have expanded their energy ministries to become ministries of climate — empowering them to lead the way. In the past, Israeli environmental ministers passed on the lead role in climate policy to the powerful Ministry of Finance, under the assumption that any meaningful effort would require significant financial resources.

What often makes the most sense is to entrust the responsibility for climate performance with the chief executive. In the US, for example, climate czars John Kerry and Gina McCarthy work out of the White House. There is no reason why Israel’s prime minister shouldn’t manage the unavoidable bickering and turf battles between the many relative government bodies who need to get with the program. The environmental ministry simply lacks the political muscle.

Moreover, Israel’s proposed climate law is woefully short on specifics and creativity. Why shouldn’t we require that any new parking lot paved in the country be covered by a solar roof? Such a law (for facilities with 35 or more spaces) can be found in Germany. Carbon taxes are increasingly appearing in climate legislation. Why don’t we tax the import of meat, with its prodigious carbon footprint, like they have started to do in Norway, Switzerland, Sweden, and Spain? The phaseout of fossil-fueled cars; mandatory photovoltaic infrastructure on the roofs of new residential buildings, perks for not-motorized commuters… the list goes on and on.

Ultimately, I am glad that the Knesset passed a preliminary reading of a climate law, even if it is profoundly unambitious. That’s because I believe that the real work — the “heavy legislative lifting” — required to make this statute worthy of Israel’s environmental values and commitment to global sustainability, will need to take place in Knesset committees. And this work has only just begun.