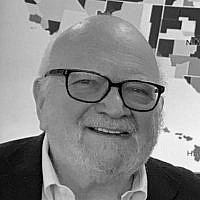 The Blogs
Burt Siegel
Apply for a Blog
Advertisement
Please note that the posts on The Blogs are contributed by third parties. The opinions, facts and any media content in them are presented solely by the authors, and neither The Times of Israel nor its partners assume any responsibility for them. Please contact us in case of abuse. In case of abuse,
Report this post.

Each day as we open our newspapers or turn on our televisions, we regularly feel overwhelmed by the latest news of additional cases of the novel coronavirus. As of writing this, the United States has nearly 1.7 million reported cases, the most in the entire world. There are over 67,000 cases in Pennsylvania alone and an estimated 4,600 deaths. And by the time you read this, these numbers will certainly have increased, although no one knows by how many.

What we do know is that President Trump, his administration, and nearly every Republican in the Senate, have met this catastrophic crisis with prevarication, ineptitude, and a continued policy and practice of concern more for the multi-billionaires and industrialists than for the rest of us. If this seems in any way hyperbolic, simply look at how top airline executives and the heads of the major banks managed to reward themselves handsomely with funds from the 2009 bailout. While we have been assured that the banking and auto industry repaid the many billions of dollars provided by the taxpayer, what was little noticed was the fact that many of the top executives received large bonuses funded by government loans and grants.

Of course, this self-driven generosity has been greatly compounded by Trump and his Senate cheerleaders giving hefty tax cuts to corporations and their already grossly overcompensated top-level executives. Republicans even claimed the financial package to assist those negatively impacted by the virus-induced downturn in our economy was too comprehensive – causing a delay in its passage – and impacting millions of lives. But the real cause was the desire by Trump and Mitch McConnell to reward the wealthy while shortchanging those who are hardest hit by the pandemic. Not surprisingly, it was the Democratic members who held fast in insisting that funds be used for those who might lose their homes, have meager savings if any, and may not even have jobs to return to when the economy recovers.

It is obvious that Trump was aware of the virulence of the pandemic for some time and still deliberately played down the extent of the danger. On January 22, in response to being asked on CNBC if he had any “worries” about the coronavirus, he asserted that there was no need for concern and that “we have it totally under control. It’s one person coming in from China, and we have it under control. It’s—going to be just fine.” As is well documented, while countless health experts were sounding warning alarms months ago about the certainty of the virus reaching America, Trump lied about the virulence of the disease, and most of the cowed leadership of the Republican party echoed his ill-informed or downright dishonest statements.

The sickening irony is that while Trump still spends an inordinate amount of time praising himself, and spewing his false narrative of the allegedly timely and effective way his administration has responded to the coronavirus, more people are dying every hour because of this typical clueless ineptness, arrogance, and ongoing almost-criminal dishonesty. In fact, each elected official who ignorantly contradicts or challenges the warnings and advice of health professionals bears considerable responsibility for the extent of the pandemic.

We don’t imagine that the people who are receiving this message need much, if any, convincing that it is urgent that we replace the Trump administration and the Republican-controlled Senate this fall. It is also essential that America reelects a Democratic House.

We are proud of the role Democratic Jewish Outreach PA (DJOP) played in the 2018 congressional elections, in which we helped elect 8 endorsed candidates. Looking toward to 2020, Pennsylvania is a critical swing state that Vice President Biden must win. Recall that in 2016 Trump carried Pennsylvania by less than 45,000 votes, a margin under .75%. Every vote counts, and our tradition and history do not allow us the luxury to sit on the sidelines. I encourage those reading this piece to talk to friends and family in a non-confrontational manner, asking those who have supported Trump why they would continue to do so. Urge them instead to vote for Vice President Biden, who has a strong record of friendship with the Jewish community

While the DJOP has voted to endorse Vice President Biden for President, we want to take the opportunity to recognize the important message and campaign of Sen. Bernie Sanders. He reminded the nation that compassion, social and economic justice, and simple fairness still are hallmarks of America. Together we can and must bring back a government of the people, by the people, and for the people.

About the Author
Burt Siegel is the former head of the JCRC of Greater Philadelphia where he served for 15 years. He is currently Vice Chair of Democratic Jewish Outreach PA.
Related Topics
Related Posts
Comments