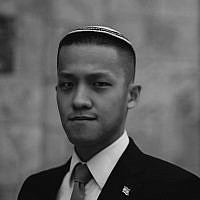 The Blogs
Cormac Uriah Lee
Apply for a Blog
Advertisement
Please note that the posts on The Blogs are contributed by third parties. The opinions, facts and any media content in them are presented solely by the authors, and neither The Times of Israel nor its partners assume any responsibility for them. Please contact us in case of abuse. In case of abuse,
Report this post. 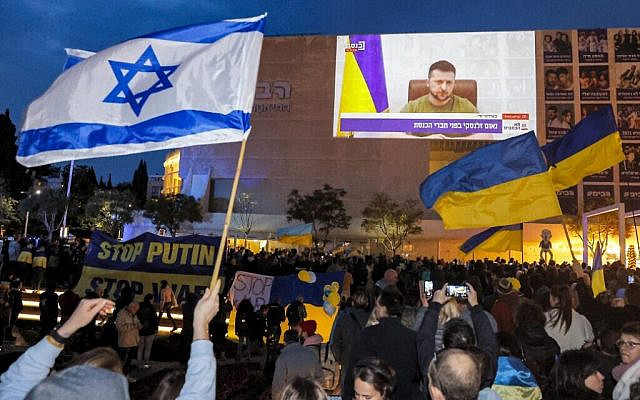 Israel has been rebuked for its perceived reluctance to help Ukraine. This criticism doesn’t take into account geopolitical realities on the ground.

When Defense Minister Benny Gantz refused Kyiv’s request for an Iron Dome defense system, Twitter erupted in a wave of harsh criticism, including antisemitic comments. Social media users blasted the “selfishness of the Jews”, “an untrustworthy people who deserve no sympathy”; some even openly rejected Holocaust remembrance and education. Not long ago, a small pro-Russian rally at HaYarkon Park in Tel-Aviv – by no means representative of Israeli public sentiment writ large – received outsize media attention. Despite repeatedly siding with Ukraine in the UN and being one of the first countries to send medical and humanitarian aid, Israel has been under attack on all fronts. This outcry, at times even coming from among us who are in Diaspora, unfairly places blame on a country the size of New Jersey with its own formidable security concerns for not doing more on a battlefield over 2,000 miles away.

Walking along the Dizengoff Street in downtown Tel-Aviv, few would miss the Ukrainian flag flying overhead. Expectations regarding Israel’s role in this conflict were high from the start, such as when then-Prime Minister Naftali Bennett announced his intentions to broker peace back in early March, making calls to Kyiv and Moscow. The focus on Israel rose drastically when Putin apologized to Israel for Russian Foreign Minister Sergey Lavrov’s “Hitler was part Jewish” comment in May, and has continued to this day.

I was studying in Jerusalem when Russian troops crossed the Ukrainian border. The shock was almost immediately felt – my Ukrainian friends burst into tears during class, constantly refreshing news feeds on their phones; I could hear the words “Ukraine” and “war” mentioned from almost every table in my yeshiva’s Beit Midrash; sunflower oil disappeared from the shelves in my local supermarket. As a Bukharan Jew myself who was raised in China, I was immediately concerned about how Israeli society would respond – after all, I’m not unfamiliar with some of my Stalinist relatives’ opinions, and Chinese social media saw a tsunami of pro-Putin and ultra-nationalist posts in the wake of the invasion.

It didn’t take long before my concerns were allayed. I saw my Russian Jewish friends standing with their Ukrainian classmates and crowds cheering as Russian citizens burned their passports in protests outside the Russian Embassy. Every morning as I entered the Knesset for my internship, I saw activists of all stripes  waving Ukrainian flags and sunflowers right outside the entrance. We waited gravely for updates from Bennett’s attempts of mediation in the early stages of the war, and joyfully reposted news articles when the Foreign Ministry under Lapid condemned the Kremlin. As Israel increases its support to Ukraine from voicing from the diplomatic front to providing humanitarian aid and field hospitals, the world’s expectation of Israel’s role in this war rose significantly.

Unfortunately, along with these high expectations came criticism, which gradually intensified as the war progressed. For example, untrue reports that “Bennett wants Zelensky to surrender” became a media bombshell. Despite Kyiv and Jerusalem both quickly denying the report, the rumor continued to spread. Many failed to consider that the Iron Dome is not designed to intercept the guided missiles that the Russian military were using, and is unfit to be deployed along the long fronts in the vastness of Ukrainian plains.

The reasoning behind such attention and frustration toward Israel is inherently negligent of of geopolitics realities, and can find its roots in antisemitism–even if most who participated in such conversations are not aware of it. People tend to expect Israel to fully support Ukraine since “Zelensky is Jewish”; Israel is often portrayed as the “invincible villain” in Israeli-Arab/Palestinian conflicts by the media and often times, military social media accounts. Many were expecting Israel’s “superior weaponry and technological system”, and its “influence in economy” can somehow single-handedly help Ukraine repel the Russians and win the war. It is not hard to see such narratives are merely a continuation of the classic Jewish influence conspiracies. In fact, Israel, despite its indeed vibrant technological development, is still that small nation in the Middle East sharing a 49-mile long border with Lebanon and a de facto border that’s much longer with Syria, both hostile nations that Israel is still technically at war with, and with the latter seeing large Russian influence – both political and militarily – not far away from Israeli towns on the Golan Heights.

Israel’s pressure on its Northern front is not unnoticed. However, media and academia tend to portray the image of “Israel wants to be close to Russia for bombing Syria”, again portraying Israel as a villain, neglected that the IDF must coordinate its Syrian actions closely with Russia to avoid any unintentional conflict, which could result in yet another war in the Middle East. Russia also reminds Israel that the threat is present by flexing their muscles, joint-patrolling the Golan border with Assad’s troops repeatedly. Furthermore, with Moscow ordering to liquidate the Jewish Agency in Russia in July, and threatening to sever ties with Israel in October, it shouldn’t be difficult to tell that it is a signal sent by Putin, reminding Jerusalem that Russia has the power to hold its Jewish citizens hostage.

When you drive down along the coastal highway north of Tel-Aviv, you’ll see that while the glazing waves of the Mediterranean Sea are right next to the highway, on the other side towards inland, the security barrier separating “Israel Proper” from Qalqilya, a town under the Palestinian Authority’s control, only less than 8 miles away. Israel is still the same country that struggles for its survival. This makes even the act of providing defensive weapons high risk – if the defense equipment is seized and falls into Russian or Iranian hands, the consequences will be devastating for Israel’s future warfare. This worry was only further proven to be legitimate as a recent report confirms that Russia has been trading captured western weapons in Ukraine, including the NLAW and the Javelin anti-tank missiles, and the Stinger anti-aircraft missiles with Iran, which the latter are using them for reverse engineering and cloning for their own use. As a country under such intense threat, Israel does not owe the West, and surely not internet users an explanation over its reluctance in arming Ukraine.

This doesn’t mean that Israel is not willing to help. Quite the contrary, the Israeli public has overcome the historical burden that many Jews carried from the dark past the ancestors bore in Ukraine throughout the centuries, offering donations and humanitarian supplies. It is also critical to realize that there might be ongoing supply efforts from Jerusalem to Kyiv off the record in protection of Israel’s security. After all, not all efforts are simply accessible on OSINT (Open Source Intelligence). Zelenskyy also has confirmed that Israel is working with Ukraine on intelligence, and in November, Israel also began to supply Ukraine with military communication systems. Many of the details between Israel and Ukraine might not be revealed until years later, which again makes the criticism on Israel even more unjust, almost in a form of moral kidnap.

Many in the West might never understand how “struggling for everyday survival” feels like, but acknowledging that Euro/American-centric views don’t apply to the case of every nation is crucial in analyzing geopolitics, especially when they could be on the same side as you. As a small country fighting for its survival, Israel has provided tremendous help and support relative to  its own size and condition. As Israel and its policy towards Ukraine encounters more uncertainties amid the recent election, people need to realize that Israel is not an ATM machine that provides unlimited service 24/7– it is an independent country that has its own safety concerns and a responsibility to its citizens’ safety. While I am still proudly a part of the #NAFO movement on Twitter and look forward to more support coming from Israel to Ukraine, I am calling on critics to understand and respect Israel’s decision in this conflict. If they need to find someone to blame, look no farther than the politicians in Europe and DC instead.

About the Author
Cormac Uriah Lee is a student at Whitman College in the United States. He previously studied at Hebrew University in Jerusalem and Yeshiva Aish HaTorah. Having work experience at the US Congress and the Knesset, Cormac focuses on geopolitics, defense analysis, and History of Jewish communities in Diaspora.
Related Topics
Related Posts