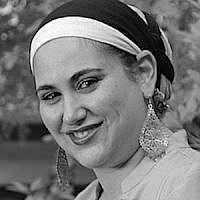 The Blogs
Hinda Eisen Labovitz
Apply for a Blog
Advertisement
Please note that the posts on The Blogs are contributed by third parties. The opinions, facts and any media content in them are presented solely by the authors, and neither The Times of Israel nor its partners assume any responsibility for them. Please contact us in case of abuse. In case of abuse,
Report this post.

Let me start by laying my cards on the table. I’m twenty-eight years old and female. I am a product of Conservative movement institutions: a dynamic Conservative synagogue, Ramah programs (day camp, overnight camp, TRY, Israel Seminar), Solomon Schechter schools, and Prozdor at the Jewish Theological Seminary (JTS). I participated in Koach at Hillel as an undergraduate. As a professional, I have served four Conservative synagogues. I earned cantorial ordination at Hebrew College, a pluralistic institution, training under several cantors who earned their titles at JTS. I am a member of the Cantors Assembly. I currently serve a Conservative congregation as officiating cantor and religious school director.

The internet-based discussion around the Conservative synagogue in the past month has painted a rather bleak picture overall.

Roberta Rosenthal Kwall notes in her December 30th, 2015 article entitled “Conservative Judaism Has Just Two Viable Options” that the Conservative Jews in synagogues on Shabbat morning are largely an older crowd, and that most “really serious” young Conservative Jews either participate in Modern Orthodox institutions or Independent Minyanim, while others “put their Judaism ‘on hold'” until they have families.

On January 11, 2016, Marc Gary’s Op-Ed for JTA, a clear response to Kwall’s article, indicated that participants in Conservative synagogues “find experiences of meaning and community that are joyful, profound and inspiring.” He implies, though, that synagogues are not enough, indicating that contemporary clergy must be “entrepreneurial professionals who go beyond the four walls of synagogues or other institutional forms and seek out Jews who are unaffiliated and feel disenfranchised.”

Published on January 15, Rabbi Steven Wernick told JNS.org, “The current synagogue model up until this time was a 2,000-year-old experiment, […] and it just no longer has the capacity to meet the challenges, and so it has to be reinvented.”

Ethan Weg, in his January 22 Times of Israel post, asked “Where Should I Pray Now?” He indicated that while he had heard the plea of a Conservative rabbi at the recent USY International Pre-Convention that young products of Conservative movement programs like USY should strive to attend local affiliated synagogues, doing so would require “sacrifice [of] my spiritual needs for the needs of a greater movement.”

Kwall is a law professor at DePaul University; Gary is executive vice chancellor and COO of JTS; Rabbi Steven Wernick is the CEO of the United Synagogue of Conservative Judaism (USCJ); Weg is a young professional specializing in media and photography.

Where are the synagogue professionals in this conversation? Rabbi Wernick was a congregational rabbi before serving the USCJ. But what of those of us who chose a path into the rabbinate, cantorate, or Jewish education, who currently strive to serve those who show up in our pews and programs every day?

Every synagogue is different, of course. Rabbi Paul Resnick, long-time director of Camp Ramah in the Berkshires, used to describe Conservative Judaism as a chess board — that is, there are infinite moves one can make but strict rules to which we must adhere as we make those moves. In that vein, each Conservative synagogue is different, but “on the chess board” as it chooses to affiliate with the USCJ. Within three miles of my congregation in the Washington, D.C. area there are two other Conservative congregations and there are several more within a radius of ten miles. All represent different congregational identities, values, while overlapping in the essential ideologies that define Conservative Judaism.

Weg’s assumptions about affiliation with a synagogue community rather than an independent minyan reflect an unfortunate reality: he, with his peers, can’t make the jump from “mom and dad’s shul” to ownership of his Judaism in the framework of synagogue membership. He focuses on the spirituality of Shabbat services, and doesn’t recognize the other “services” affiliation with a synagogue provides: community seven days a week, intergenerational programming, chesed care, Israeli dancing, opportunities to participate in and hear good Jewish music, adult education, programming geared toward all kinds of Jews, not just ones with children. He misses the camaraderie of morning and evening minyanim, Shabbat and holiday dinner invitations, communal social action work. He doesn’t benefit from developing friendly and pastoral relationships with a rabbi or a cantor. When he needs it, he’ll find that a congregation will provide education for both him and members of his family, pre-marital counseling, bar/bat mitzvah training, and wrap anyone who loses a loved one in the warm embrace of community during shiva, sh’loshim, and the year of mourning. Did I mention all of this is included in membership? We don’t charge à la carte.

Will a young professional get Shabbat dinner invitations and education, and develop community at an independent minyan? Of course. I have great respect for the davening and community created in independent minyanim, particularly those that collect individuals who are still searching for their spiritual homes in the greater Jewish community.

But is one who joins a synagogue a spiritual martyr? Not at all.

In fact, Conservative synagogues marry the best of both worlds. Not only do these synagogues employ clergy who are trained in the highest levels of service-leading and facilitation, but they are also places where one can influence the culture of the davening (services) and the programming. Want to lead services? In my shul, trained lay-leaders lead half the services on Shabbat and all weekday minyanim. I’m sure we’re not alone. Have a suggestion for how services might become more welcoming, or more spiritual? Consider joining our Religious Activities Committee, which is a group of lay-leaders interested in steering the same. Don’t see a program you would love to spearhead or participate in? Tell us. Not only will we embrace your idea, but we can even provide the infrastructure (which is already in place), advertise it, and bring it to members whom you didn’t know had similar interests. You won’t even have to compile your own email list.

I understand the impetus to go out and create something new, or join a group of innovative folks doing D.I.Y. Judaism. I do. If I hadn’t chosen cantorial ordination, I might also be involved in such a community instead of a synagogue; several of my close friends are. But in the “Start-Up Nation,” remember that it’s still okay to rely on established institutions to support you on your journey.

If you can imagine the same dynamic USY experience you witnessed at International Convention that happened similarly twenty years ago, know that several of those ruach-filled USYers became our members, our board presidents, our committee chairs, our educators, parents of our current USY board members and participants. Those rabbis you admired as they spoke to a room full of Conservative young people? Many of them grew up here, too.

Before dismissing the Conservative synagogue as non-spiritual, unfulfilling, and unable to keep up with the developing Jewish reality, I invite you to give us a chance. Find a community whose values reflect yours, whose clergy inspire you, whose members uplift you. Find a synagogue that’s mostly-the-way-there for your needs and reflect on what you can bring to the table. “Shul shop.” Don’t just come once but several times. Set meetings and coffee dates with clergy and members. And don’t be afraid to tell us that you’d like a Shabbat dinner invitation.

About the Author
Cantor Hinda Eisen Labovitz is the cantor of Ohr Kodesh Congregation in Chevy Chase, Maryland, and serves on the executive council of the Cantors Assembly. The is a graduate of Hebrew College's School of Jewish Music where she was ordained Cantor and earned a Masters of Judaic Studies degree and Boston University, where she earned a B.A. in Religion and a concentration in Special Education. The views expressed in her blog are her own, and do not necessarily reflect those of the congregation or the organizations in which she participates.
Related Topics
Related Posts
Comments