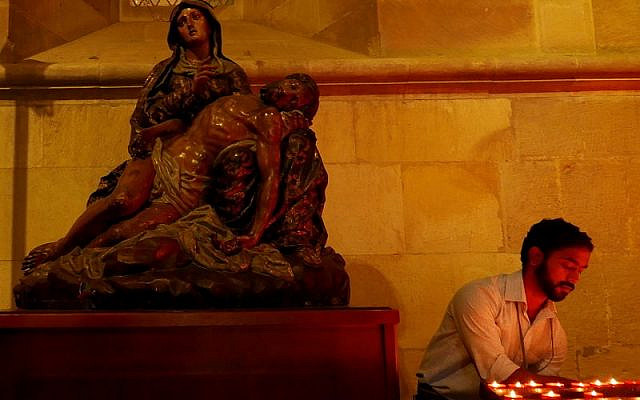 After a few weeks in Cairo, the question finally arrived from a local fellow friendly enough to be accosting strangers at the bar at Khaled’s and liberal enough to be drinking exorbitantly overpriced whiskey: What is your religion?

I could have opted for the convenient lie and replied that I am Jewish. But I’m a secular Jew with no religious faith, and I chose to answer honestly. What prompted this foolishness I cannot say: perhaps I was, like Winston Churchill in his day, a little tired and emotional.

Noticing his shock I walked it back and tried to explain about the difference between agnostic and atheist. Agnostic is more precise, because really I just don’t know, and it seems less aggressive. The man waved away this nuance and commenced to be scandalized.

“My friend,” he said at last, struggling to stay calm. “Let me give you very very good advice. Better, much much better, when asked this simple question, to say you are a Jewish. In Egypt we are having no problems with the Jewish. But unbelievers, it is a problem.”

By the end of my seven-year association with this excellent but troubled land I knew well what good advice it really had been. Life is too short to go around offending kind-hearted people who insist on a religion. Precision is no reason to risk making it shorter still. Jewish it was to be.

Is this fundamentally so different in the West?

I am amazed at the staying power of religion. We have put humans on the moon and spawned Vivaldi and Graham Greene and Einstein and Berry Sakharov and whipped up a thousand accomplishments of science and art and philosophy. Yet religion holds its ground, still spinning its tales and insisting on faith and causing occasional awkwardness between people who should know enough to keep things meaningless and therefore polite.

I’m pretty sure Barack Obama was only pretending to be a little religious, alongside most contemporary US politicians. Benjamin Netanyahu and Donald Trump, for sure. Same for most people in Philadelphia who say “God bless” in response to a sneeze.

I suspect they all sense that many religious people will be more offended by unbelief than the secular by pretense. The secular are on a sort of back foot, a silent majority that dare not speak its name. But in true agnostic fashion, I cannot be sure.

Consider this: In 2014 Pew found 21% of Americans had no religion but only 3% said they were atheist and 5% were agnostic. The other 13% believed in God without having a religion? God knows.

I think many take his name in vain. In Israel “Be’Ezrat Hashem,” like “Insh’allah” in the Arab world, both meaning roughly “God willing,” is the dispiriting disclaimer attached to verbal contracts by service providers who otherwise manifest only the flimsiest of pieties. One wants to shout back: No, YOU willing! God, if existing, has bigger fish to fry than my drywall.

I occasionally share my concerns with the genuinely religious.

I confess to a basic breakdown with the concept of faith. It seems unfair to demand it of a person who otherwise at least tries to be rational. I tell them that I understand knowledge (or presumed knowledge), assessments and hopes. But not faith.

Some argue that life without faith, whatever that may be, is empty. I say not really, because there is Curb Your Enthusiasm Season 10 and Monty Python — but even if so, how does that justify pretending a fantasy is not a fantasy? It is frustrating not to know – but that doesn’t mean we do know. Of course it would feel better to accept without question the existence of comforting things – but can this end justify these means? I respect outcome-oriented strategies, but if a person said that they felt better believing they are a billionaire when they are not, how much respect would this provoke? The convenient lie is in no context other than religion respected, much less revered.

Others ask how anyone can conceive that a world as wonderful and complex as ours could have been conjured up by no one out of nothing. How can you think science explains everything? I don’t, I reply. There is much and probably most that remains unexplained. I can live with uncertainty and the humility of not knowing; can you?

In my youth in the United States, I would sometimes find myself in discussions with Jewish friends professing a minor level of religion. My sense was that the fact that Jewish life in America revolved around tradition imposed the pretense on them. Often, when I pressed them on how they viewed God, the answer tended to be of the “God is the good in all of us” variety. I can live with that, I guess, but it seemed like overthinking.

What vexation! Literalist skepticism seems small minded. Saccharine acquiescence seems weak-kneed and dishonest. And no matter what, clearly there is more going on than meets the eye. We have figured out next to nothing.

Of late I have entered into a debate with Rabbi Herschel Grossman, a scholar and staff member at a Jerusalem yeshiva, who took exception to my writings on this site. We have had an honest and continuing exchange in which he has professed some amazement at my willingness to engage — but also, I sense, frustration at my immobility on the question of religion. Somewhat to my surprise, he rejected my claim that religion required faith. His view of it seems to attach to a devotion to the writings based on centuries of their scholarly successes. He claimed Judaism is not predicated on beliefs but on “logical assessment and analysis of the Torah and empirical reality.”

“This knowledge may fail to guarantee happiness, but it certainly can help an individual understand life,” wrote “Heshy.” It is odd: I could have said the same of science. I do not have the inclination to join his world to achieve expertise in what is really going on there. Sometimes if the essence is off one can reject a thing without expertise. And despite what he says, there is a lot of praying to God that goes on in his quarters; this I know.

Should the secular person pretend to have even a little faith — for the scholarly higher purpose and as a nod to millennia of proud tradition?

I assess the chances that there is a God that fits the classic model even a little to be one in many billions. Not zero, or course; but that is because I am a skeptic. I am not even sure that you, dear reader, exist. Everything is open to question. When the levels of probability I attach to God are so low, am I not in effect an atheist?

Just in case God is listening, I’ll call myself agnostic. I have severe doubts but I hope to be wrong. And I’d love to hear directly, if the news is not too bad.