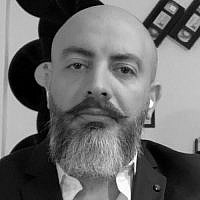 The Blogs
Omid Safari
Apply for a Blog
Please note that the posts on The Blogs are contributed by third parties. The opinions, facts and any media content in them are presented solely by the authors, and neither The Times of Israel nor its partners assume any responsibility for them. Please contact us in case of abuse. In case of abuse,
Report this post.

I am an Iranian, born in Iran one year after the Islamic Revolution in 1980. I spent my entire childhood there and was schooled in its educational system, which is designed by an extremist Islamic cult known as the Islamic Republic of Iran. Throughout those years and up until today, anti-Semitic and anti-Israel dogma pervaded the society and was taught in all school and university textbooks. During the four decades of the Islamic regime in Iran, the term “occupier” has always been used as a synonym for Israel in television, radio, press and even movie channels. For decades, the idea of destroying Israel has been presented as a religious-national duty for all Iranians.

I come from a country where many streets are named after terrorists who have killed Israelis. Electronic signs counting down the days to Israel’s extermination have been erected in its streets. Government officials regularly set Israeli flags on fire, alongside the American flag, at public events and ceremonies. At the entrances to universities and government offices, the Israeli flag is painted on the asphalt so that people can step on it. Billions of dollars are spent annually on regime propaganda against Israel and support for terrorist groups such as Hezbollah and Hamas. Most importantly, in government propaganda, the Holocaust has always been portrayed as a historical lie. 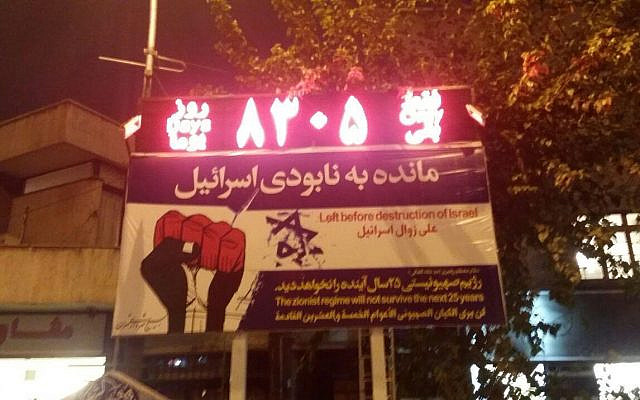 A sign counting down to Israel’s destruction in Iran. (Courtesy Omid Safari)

As you may recall, Iran’s former president, Ahmadinejad, constantly referred to the Holocaust as a historical lie, fabricated to justify the creation of the state of Israel in international forums, and the Supreme Leader of Iran, Khamenei, has always called the Holocaust a fiction.

Given the repetition of this message, it is only natural that Iranians like me, who were born and grew up going to school and university during the reign of the Islamic Republic, have a negative view of Judaism, Israel and the Holocaust or, at best, have no opinion on these topics.

Up until the age of thirty, I also lived in Iran and was influenced by the same insinuations and propaganda. After I was imprisoned multiple times because of my political activities as a reformist, I left Iran and went to Beirut to apply for asylum with the UN High Commissioner for Refugees. (Choosing Beirut for this purpose was one of the worst, most misguided decisions of my life and I will have to write about my horrific experiences in my years there in a separate article or book in the future.)

Lebanon is a country of eighteen different tribes and religions, where the numerous religious and cultural differences among the people have often led to civil war. And in Lebanon too, nearly all media references to Israel and the Jews portray them as enemies, and there are multiple Lebanese and Palestinian terrorist groups fighting and inciting against Israel.

It was during my time in Beirut (about ten years ago) that I accidentally bought a DVD of a movie by Steven Spielberg called “Schindler’s List,” the story of a German businessman named Oskar Schindler during the Nazi occupation of Poland. By setting up a factory at great expense and recruiting Jews living in the city of Krakow, he was able to prevent them from being sent to the Auschwitz death camps, thus saving the lives of many Jews. I was so impressed by this film that I watched it five times in one week and from that moment on I promised myself that I would have to travel to Poland before I die and take a closer look at what actually happened in Auschwitz and Birkenau. 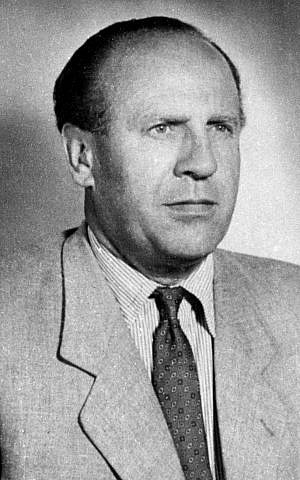 Finally, last year, a decade after discovering the film, and having immigrated to the Netherlands, I traveled to Krakow. It was a three-day trip during which I witnessed the bitter depths of what happened to the Jewish people and the inmates of Auschwitz. During my visit to Oskar Schindler’s factory, I felt that Oskar was with me and that his great soul saw me and I also felt that I had known him for many years. In my heart, I told Oskar: You were the essence of humanity at a time when humanity disappeared.

On the second day of my stay in Poland, I visited Auschwitz. The atmosphere there and seeing the facts of the Nazi atrocities against the Jews and other prisoners were so horrible that I was depressed and sad long after my return from Krakow. Sequences from Schindler’s List kept appearing before my eyes. But beyond internalizing the brutal and undeniable genocide perpetrated by the Nazis against humanity, I discovered that the truth always manifests itself. Just as a two-hour movie destroyed forty years of negative propaganda and systematic distortion of reality by the Islamic Republic in Iran, the truth, like a river, ultimately finds its way through the rocks that hinder it and continues to flow.

This should be an important lesson for dictatorial regimes like Iran, North Korea and others: You cannot deny and distort history for your own purposes. You cannot promote nefarious goals such as the destruction of another nation and country by using the media and propaganda in schools and universities and infecting the minds of children and adolescents.

Look at me! Today, my respect for Israel and its legitimacy shows that you, the Islamic Republic of Iran, have utterly failed.

I also wish that one day I could visit Steven Spielberg and tell him how, in just two hours, his beautiful movie was able to unravel the sinister and inhumane plans and goals of the Islamic regime in Iran against one of the longest suffering nations in history, and how that movie encouraged me, who grew up in the same false education system, to take a journey to find the truth and to be able to write this text today.

About the Author
Omid Safari is an Iranian who left his country after his criticism of the Islamic Republic led to his being arrested three times. Today he lives in the Netherlands and has UNHCR refugee status.
Related Topics
Related Posts
Comments