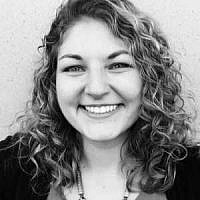 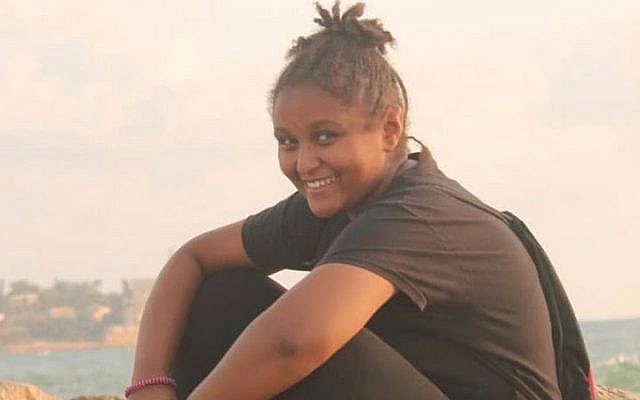 The assault and murder of 13-year-old Silvana Tsegai last week by her mother’s former partner brought long overdue attention to the desperate conditions for women in Israel, and asylum seeking women in particular. For over a decade, the Israeli government has systematically attacked the community with a barrage of cruel policies in an expressed attempt to cause pain and suffering. Female refugees, like all women, bear the burden of the world on their shoulders and the government of Israel made the decision to pile on more weight. The recent rise in domestic violence is no accident. This is the direct result of the Israeli government policies that intended to make life impossible for refugees.

I first joined the Eritrean Women’s Community Center in 2016 after working for several years within the wider asylum seeker community. When the Deposit Law plunged Eritrean women below the poverty line, the center distributed canned food to single mothers and organized vocational training to help them access more gainful employment. When women who reported their husbands to the police for domestic violence had their bank accounts frozen because they were under the husband’s name, we referred them to legal aid NGOs who petitioned the courts for the basic right to access their own funds. And when women came to us in tears with bruises from the night before, we worked with social service organizations who could provide special access women’s shelters where they could spend a short few weeks in a safe space.

I am not an asylum seeker myself. I am, however, a woman. I have seen how domestic violence in any culture can destroy a woman’s confidence, separate her from her community and leave her feeling like there is no escape. These are things I know on a deeply personal level. These emotional barriers leave a woman feeling immobilized even when there is a strong safety net of services available to her. I can only imagine how crushing these feelings would be if I were an asylum seeker with no legal status, and therefore no legal right to access any of these services.

In Israel, every asylum seeker is taxed as a foreign worker, at an average rate of 14%. On top of this tax, a Deposit Law was passed which dictates that an additional deposit of 20% is deducted and placed in a secure bank account which can only be accessed if an asylum seeker agrees to leave the country. Many asylum seekers take home only half of their earned wages in their paychecks, once all the additional deductions and taxes are withdrawn. Because the law forces employers to pay an additional 16% into this reserve, it has become more difficult for asylum seekers to find gainful employment or feel a sense of job security.

Those hit worst by this were women. While men find work in kitchens where they work side-by-side with their employers and get to know each other on a more personal level, women find work in cleaning agencies where they are far removed from the company’s upper management. When restauranteurs were rallying against the deposit law, cleaning agencies began laying off asylum seeking women in alarming numbers. The result was undue hardship that disproportionately affected women. And although last month a decision was made to provide a discount to single mothers and other groups identified as particularly desperate, the economic and psychological havoc this policy has wreaked on women cannot be undone. 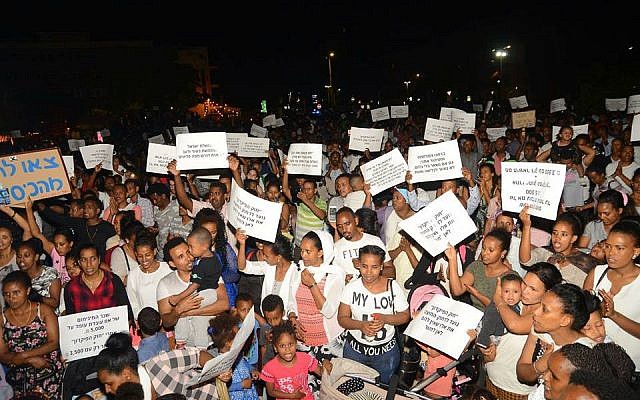 Eritrean asylum seeking women in Israel protest against the 20% Deposit Law in 2017.

Within this financial nightmare, married couples must work long hours outside the home just to meet their most basic needs. This creates dissonance in the household as couples work themselves into utter exhaustion. Children are under-supervised and often act out for attention. In an environment such as this, maintaining a healthy marriage is difficult for partners with the strongest foundations. However, in a community where rushed marriages are commonly employed by women as a strategy to protect young men from imprisonment and coerced deportations, some of these relationships become high-risk situations for domestic abuse as well.

The situation becomes more severe when we turn to single mothers. To understand the root cause of this epidemic of single motherhood, one must address Israel’s policy of making life as difficult as possible for asylum seekers. The lack of legal status, taxation and deposits, forcible imprisonment in Holot (which operated from 2014 to early 2018), and constant character attacks against the community were engineered with one purpose in mind: to coerce asylum seekers into “voluntarily” deporting themselves.

In an average Western society, 50% of marriages end in divorce. However, asylum seekers considering divorce were until recently – thanks to the closure of the Holot asylum seeker prison – trapped between a rock in a hard place. During the 4 years that the facility operated, any single man was eligible to be summoned to prison at any time, for the simple act of having entered the country. Married men were exempt, but divorced men were not. It is therefore unsurprising that many men sought a third option: voluntary return to Uganda or Rwanda.

Other men found the situation in Israel so desperate that they put their own safety on the line in order to rescue their families. These husbands took the voluntary return option with the hope that they could reach a Western country and apply for their families to join them in a new land of fresh opportunities. Some of these men were captured by slave trades in Libya, while others drowned in the Mediterranean Sea. A lucky few found their way to Europe where they were faced with spending years on their own asylum applications before even getting the chance to apply for family reunification, which can take an additional 1 to 2 years. Though these husbands had pure intentions, their wives remained behind with little to no support structures. 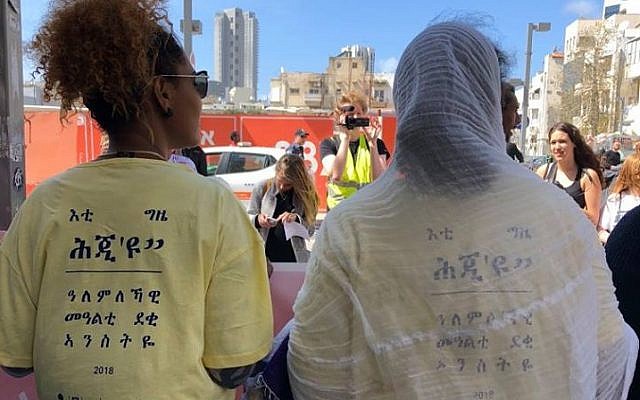 Israeli women surviving as single mothers require an incredible level of resilience and determination to care for their families, even with welfare services and public health care. Even further, asylum seeking women without a durable legal status are denied access to these very basic support systems which already exist. Less than one percent of African asylum seekers in Israel have been granted refugee status, and without this recognition they are unable to receive any welfare support, register for social security or national insurance, access food distribution centers or receive any other forms of public support. Despite paying more in taxes than an Israeli citizen, they receive no assistance in their hour of need. And because their paychecks are lower than the legal minimum wage, these women quickly find themselves in crisis. Single mothers are independently and wholly responsible to pay for rent, food, utilities, transportation, healthcare, childcare, school supplies and clothes for their children.

Asylum-seeking single mothers are in many cases forced to find community resources for survival. This can include charity from their church, but more frequently takes the form of financial aid from a distant male relative such as a cousin or uncle. Single men who are not supporting their own children are expected to provide assistance to extended family members who may be struggling. However, Israel’s policies have frequently targeted these same single men for imprisonment and deportation, forcing many women to turn to prostitution to survive.

In 2017, we held an open town hall forum at the EWCC to discuss domestic violence and the responses we received were nothing short of desperate. The women discussed their fears about approaching the police for help in cases of violence because they could not afford to support themselves if their husbands were not in the picture. Many had children abroad whom they needed to send money to on a regular basis, otherwise they feared their children’s safety would have jeopardized. Some women expressed anger towards the government, citing that the external stress placed on their families was tearing them apart and causing nightly arguments with their spouses. Others feared that their husbands were looking for ways to escape from Israel, leaving them alone as in a country where they had no help and no hope. Each story was unique, but the common thread was always the direct line one could draw between Israeli policy, and the daily suffering they experienced. 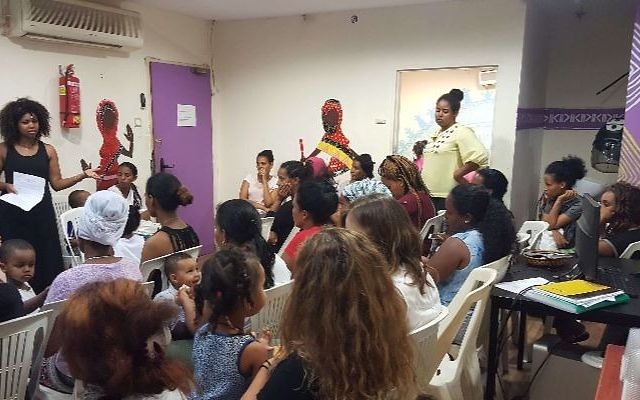 If all of these issues that undermine women’s safety stem from conscious policy decisions, then one thing remains clear. The work being done by aid organizations to mitigate women’s suffering can only go so far because it is a treatment of the symptoms rather than a cure of the underlying cause.

The only way to truly protect women is to give them a durable legal status, and put an immediate end to the laws that intentionally cause pain and suffering for the community. Once this is done, we need to reform how the police and courts treat cases of domestic violence so that women feel safe enough to come forward. Finally, the government must fund culturally-relevant education programs for men about marital and family wellness, not just for asylum seekers but in all sections of Israeli society. If Israel wants to join the rest of the developed world in claiming to uphold the rights of women, it must look inward at its abusive policies towards asylum seeking women and make meaningful changes to end this injustice.

About the Author
Andrea Gagne is a U.S.-based aid worker who has worked for several years with Eritrean refugees in Israel. She has worked in multiple refugee community centers in south Tel Aviv, including the Eritrean Women’s Community Center. Andrea is a graduate of Hampshire College, has a master’s degree from Tel Aviv University, and also studied at the University of Ghana.
Related Topics
Related Posts
Comments