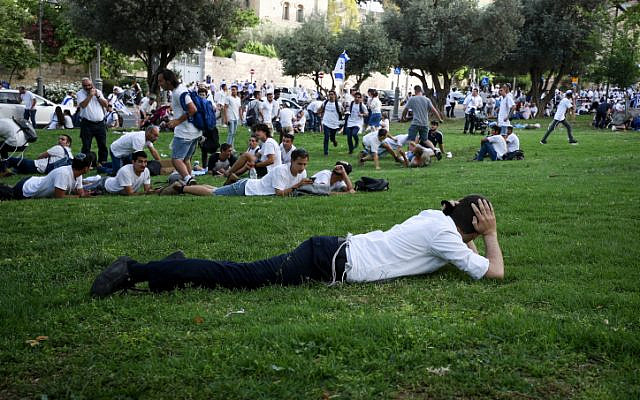 Israelis take cover as a siren sounds warning of incoming rockets from the Gaza Strip, during Jerusalem Day, in Jerusalem, May 10, 2021. (Flash90)

“Did we just hear a siren?”

I was sitting in my room, with the door closed tight to bar my toddler out for the duration of a Zoom call, and only realized I heard something when the man on my screen said these words. Neither of us thought that we heard correctly, so we just went on with our meeting. Outside the room, I found out later, the world wasn’t as confused.

Less than a kilometer away, in Jerusalem’s center of town, families in blue and white were told to sit down on the ground near stone walls. People lay down the flags they brought to celebrate Yom Yerushalayim. Some took out sandwiches instead, and fed their crouching toddlers snacks. People sang “Am Israel Chai” and ate and waited. Parents held their children close.

By the time I came out of the room, those families were back to marching and to dancing. But the world around us altered, and the sense of danger shifted. The rising tensions of the week behind us morphed into a shooting war.

I don’t know what it is, exactly, that we’re facing. I can pray that we will find a way to avert a serious escalation, but recent history has taught me that such hopes might be in vain.  But this I know, regardless of the exact contours of what’s before us: despite the stress to come, the fear and the confusion, we can’t afford to lose sight of some deeper, hidden truths.

Focus on the here and now, and you might as well give yourself over to anxiety. To panic. To terror. Allow the news to set your heart rate, and you will huff and puff and clutch your chest and be easy prey for those who wish you ill.

Because if all you see is here and now and oh-God-why-so-complicated, how can you feel anything but helpless, raw despair?

But we live in a city whose roots go into our distant past, into the tales and truths that shaped us. And in those depths, hope dwells, and a sense of equilibrium awaits us. It is there, and it is ready for the taking. But we need to slow ourselves, to listen, to go deep.

Slow down, and you’ll remember: Once upon a time, a man in search of God raised a knife upon this mountain, convinced that he will have to kill his son.

But the angel cried “Do not raise your hand against the boy,” and Abraham listened. And despite what seemed like the inevitable outcome, Isaac lived.

Slow down, once more, and you’ll remember: Once upon a time, King David resigned himself to watch his city ravaged by a plague that was ordained by God Himself as punishment. But then he cried “I alone am guilty, I alone have done wrong; but these poor sheep, what have they done? Let Your hand fall upon me and my father’s house!” and God listened. He told David to buy the plot of land that will become the Temple later and bring offerings upon it.

And once he did, the plague stopped.

So yes: we heard a siren yesterday, and violence is once again erupting all around us, and God knows that in this place of warring passions, escalation is never far from the surface of events.

But this place goes deep, and in its depths lie faith — and patience. We are part of a long and very ancient story. And this story whispers though the stones and streets and ancient hill sides, telling us that even at the razor edge of pending danger, we can — we must — have hope.

I pray for my brothers and sisters in the south and elsewhere, and I pray for a better future for all of us who share — often unwillingly — this beloved, ancient land. I know: today this future looks so grim, so hopeless. But like Avraham and David and the generations of dreamers and doers that made our presence here possible, I also know that a beautiful future can emerge even from the most grim of presents, and shed behind it even the most painful of pasts. 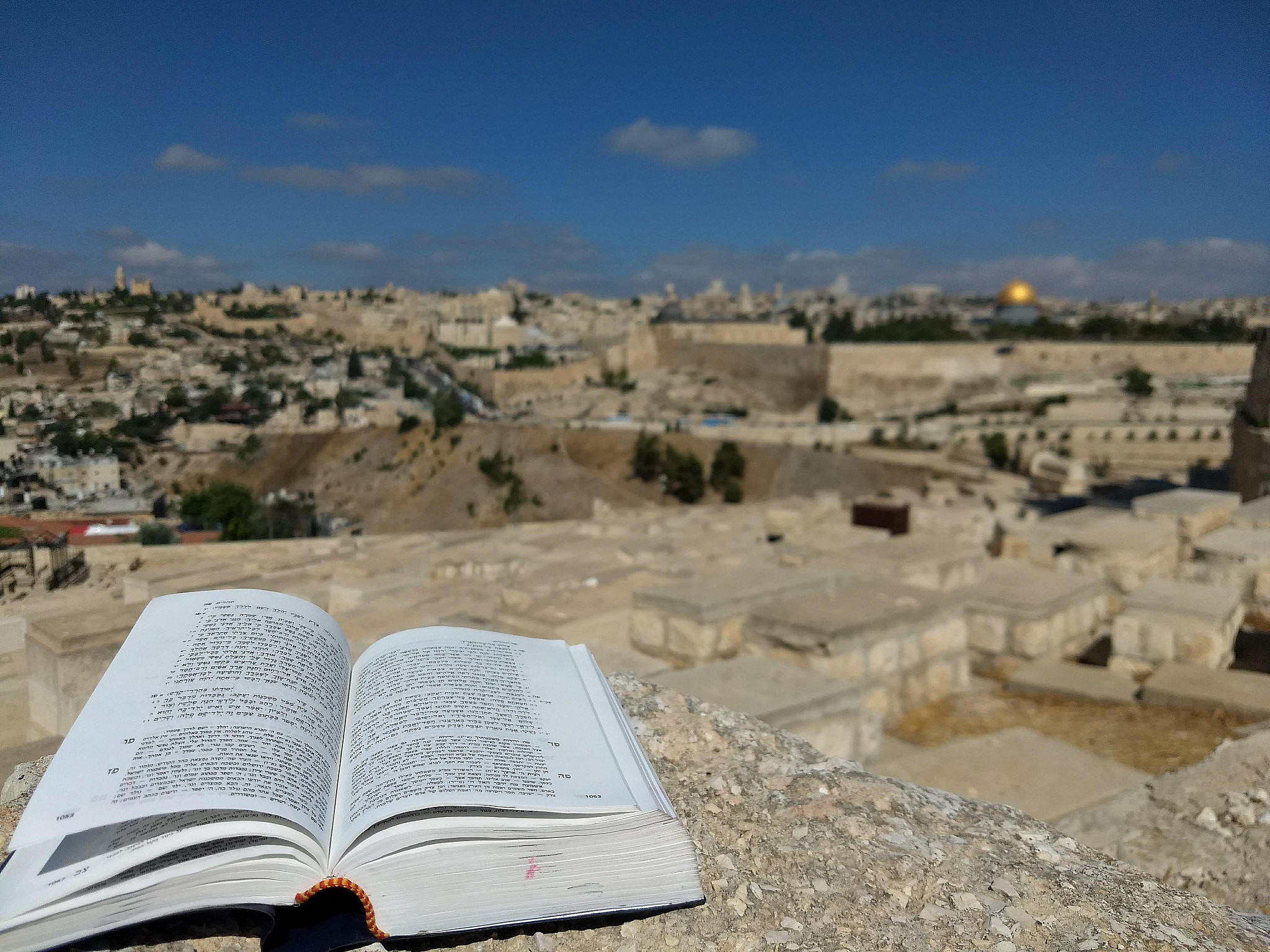 An ancient book, an ancient city. (picture taken by the author)
About the Author
Rachel is a Jerusalem-born writer and speaker who's in love with her city's vibrant human scene. She writes about Judaism, parenting and life in Israel for the Times of Israel and Kveller, and explores storytelling in the bible as a teacher and on 929.
Related Topics
Related Posts
Comments