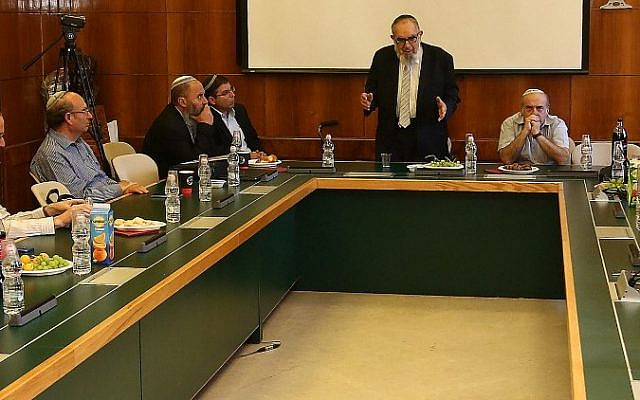 Rabbi Nahum Rabinovich speaking at an ITIM Annual Conversion Conference with Natan Sharansky at his left, and Rabbi Seth Farber at his right

The passing of Rabbi Nahum Rabinovitch this week represents the loss of an intellectual giant who produced a monumental work on Maimonides, offered groundbreaking halachic decisions through Siah Nahum, and trained a generation of scholars and religious leaders at Yeshivat Birkat Moshe in Ma’aleh Adumim. But the passing of Rabbi Rabinovitch also represents the loss of a fearless advocate of Jewish peoplehood best exemplified by his noble leadership of the Giyur K’Halacha Conversion Court Network.

As a founder of Giyur K’Halacha, I had the privilege of working closely with Rabbi Rabinovitch over the last five years. In all our endeavors, Rabbi Rabinovitch displayed a unique capacity to turn words into action, a willingness to jeopardize his reputation for what he believed in, and an exceptional sensitivity to the human condition.

Rabbi Rabinovitch was wholly committed to the plight of hundreds of thousands of Israeli immigrants from the former Soviet Union who have Jewish roots but are not halachically Jewish. He did not simply believe that our brothers and sisters should be brought back into the Jewish fold, but felt, and said countless times, that the unique reality of the State of Israel required us to address their spiritual lives, and, in particular, to convert their children to Judaism.

Rabbi Rabinovitch was not the least bit hesitant about establishing a network of Orthodox conversion courts. When I asked him to serve as the network’s president, he characteristically answered that he was not worthy, but was willing to take on the role if it meant it would broaden the vision of the Religious Zionist community. Following one of our early meetings, I marveled that this great Torah scholar was willing to invest his energy in developing the project.

Rabbi Rabinovitch remained steadfast in his commitment to the work of Giyur K’Halacha. Convinced that halacha mandated the conversion of Israeli children of non-halachically Jewish parents of Jewish heritage, Rabbi Rabinovitch found other rabbis’ attempts to discredit Giyur K’Halacha’s work disingenuous. He was shocked when Chief Rabbi Yitzchak Yosef devoted a chapter of one of his books to attacking his approach to conversion, and spent valuable time defending his position to other Torah scholars, including Rabbi Haim Drukman and Rabbi Dov Lior.

But what made the strongest impression on me about Rabbi Rabinovitch was his remarkable sensitivity. He ended each of our phone calls by praising Giyur K’Halacha’s work. When skeptical about something we were doing, he raised concerns with thoughtfulness, consideration, and respect. At every conversion court over which he presided, Rabbi Rabinovitch engaged young children in conversation. He began each session by reaching into his bag, producing a chocolate Kinder egg, and presenting it to each child undergoing conversion to help him or her taste “how sweet this is.”

Rabbi Nahum Rabinovitch knew that each life is precious, that every Jewish soul matters. I was privileged to learn from him, and to work alongside him. I remain humbled by his commitment to Jewish peoplehood, and will continue to work through the Giyur K’Halacha Conversion Court Network to further his worthy vision.