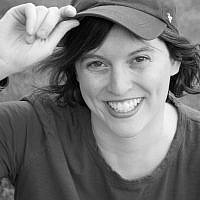 The Blogs
Jessie Atkin
Apply for a Blog
Advertisement
Please note that the posts on The Blogs are contributed by third parties. The opinions, facts and any media content in them are presented solely by the authors, and neither The Times of Israel nor its partners assume any responsibility for them. Please contact us in case of abuse. In case of abuse,
Report this post. 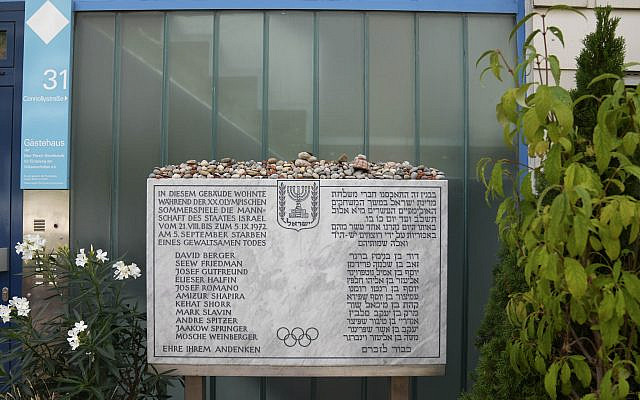 A memorial plaque for the eleven athletes from Israel and one German police officer were killed in a terrorist attack during the Olympic Games 1972, stands at the former accommodation of the Israeli team in the Olympic village in Munich, Germany, Aug. 27, 2022. (Matthias Schrader/AP)

No one mentioned torture. As my group walked through Munich’s Olympic Park we stopped at three memorials to the Israeli athletes murdered by terrorists during the 1972 games. We were told that they died. Our guide never mentioned that some were tortured.

In 2015 an article in the New York Times revealed that victims’ family members were shown documentation that indicated their loved ones had been tortured as well as murdered at the hands of the Palestinian terrorist group Black September. Perhaps our guide, being German, didn’t say anything because the claims of torture are still contentious in Germany. Perhaps it was a detail she did not know. Fifty years after the 1972 massacre her silence fits the general narrative.

Munich is a city that, unlike Berlin, does not seem keen to place plaques, memorials, or markers to highlight the lost Jews in its history. While touring near Marienplatz central square with the Germany Close Up program, our tour guide stopped to tell us that we were standing where Munich’s main synagogue once stood. She had to tell us because there was no indication, no visible record that the center of Munich Jewish life once existed. The stumbling stones, brass plates laid into the pavement near the last residence of Nazi victims, so present in Berlin, are currently banned in Munich.

Why are there three memorials to the murdered Israeli athletes in Munich’s Olympic Park? Because it took so long to get things right. One, a plaque outside the apartment where the Israeli athletes once stayed, lists their names. Another, a sculpture by artist Fritz Koenig, constructed at the intersection between the Park’s arenas and housing, again, only lists the names of those who were killed. The last memorial wasn’t opened until 2017. It was put together in conjunction with the families of the victims. The memorial tells the story of the massacre on a loop on a video screen and features the history of the athletes, coaches, and officials who were lost, not just their names. The massacre, at this latest memorial, is at last given context.

Kolehmainenweg Memorial to the 11 Israeli athletes and one German policeman killed in the hostage-taking in Munich in 1972 by Fritz Koenig, 1995. (CC Dr. Avishai Teicher via Wikimedia)

The only silence anyone asked for was at the Olympics themselves. Not until 2021, in Tokyo, was an official moment taken during the Opening Ceremony to honor the eleven victims of the 1972 Olympics. But the silence of omission, which has largely surrounded the massacre for 50 years, was still visible when I visited Munich’s Olympic Park.

The park, unlike many Olympic arenas and villages, once the games are complete, is still standing. The venues are still used and were hosting the 2022 European Championships when I visited in August. Munich should be commended for integrating the massive scale of its Olympic construction into the life of its city. As an Olympics fan, I couldn’t help smiling at the pictograms, designed by Otl Aicher, that were used to represent the different sports without the need for any translation. But I was more disconcerted than excited, very aware of what our tour was there to see.

The Munich Olympic Village, once home to international athletes, is now home to families and students, the apartments turned into full-time residences for Munich’s population. The modern utilization of the apartments includes the suite where the Israeli team once stayed, currently used by a research association. Even if no one was tortured there, two men did die in the Olympic Village: wrestling coach Moshe Weinberg and weightlifter Yossef Romano. Why anyone would want to live or work in such a space is something I don’t understand.

While Munich’s government does not want stumbling stones, and the latest memorial installation came to be only after a long-fought battle by the families of the victims, it seems everyone in Munich wanted to speak at today’s commemoration of the attack. Only the families of the victims would have been absent if, after 50 years, a compensation agreement had not been reached at the very last minute.

Munich is known for its Oktoberfest celebration. Pavilions are already under construction. It is a city far more interested in collective celebration than in collective grief. But, perhaps, it needs to do a better job at acknowledging both. Like the three memorials that exist in the Olympic Park, Munich does have a history of making an effort. Try, try, try again. Fifty years on, Munich needs to keep trying. Memory and monuments are imperfect, but like the athletes of the Olympic Games, continuing to take part in the exercise matters.

About the Author
Jessie Atkin is a Washington, DC based writer and social media manager. She writes fiction, essays, and plays. Her work has appeared in The Rumpus, Writers Resist, Daily Science Fiction, Space and Time Magazine, and elsewhere.
Related Topics
Related Posts