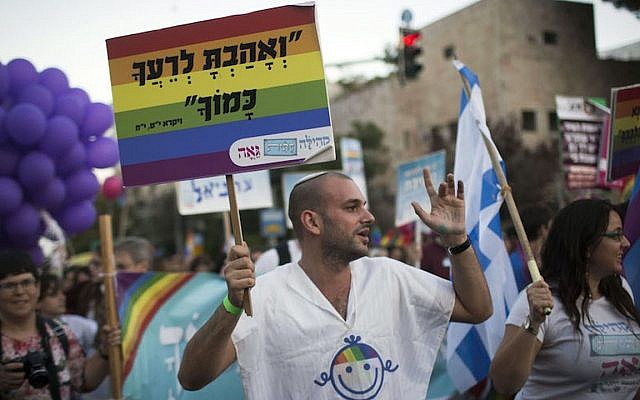 Thousands of people march during the annual Gay Pride parade at a main street in Jerusalem on September 18, 2014. (Hadas Parush/Flash90)

I was recently asked by a synagogue to publicly speak, which I thought was a genuinely interesting and lovely request. Shortly thereafter, however, I received an apologetic text that, in the end, I would not be needed. There was a mix-up and someone else had already been asked. It’s plausible, but it didn’t help the gremlins in my head that, given the current climate and discussions about belonging, plague me with anxieties and uncertainties about my place and my voice.

While I’ve chosen Orthodoxy as a lifestyle, I haven’t had that same luxury of choice regarding sexuality. That’s mine to reconcile. I understand that my natural human need to belong isn’t inherently everyone else’s problem. Not that they need my permission, but honestly, Yeshiva University (YU) can do what it wants. So can any institution for that matter, Orthodox or otherwise. They can have pride alliance clubs or not. They can invite gay speakers to share their experiences on what it means to navigate a gauntlet that forces them to choose between religious belonging and self-actualization, or not. They can wrestle with ways in which people who aren’t in the box can still fit into the community or they can decide not to make it their fight. Given the complexities and nuances, Orthodoxy’s limitations on this issue are understandable. Best to keep our expectations low.

I’m mostly stumped, however, by the confusing doublespeak. We can either talk about love, respect, and safety, or we can talk about other Jewish values, but it doesn’t make sense to lump everything into one blanket policy. While it may take a great deal of courage to be Orthodox and gay, it also takes a great deal of courage to be Orthodox and name what we’re talking about when we’re talking about gay people in the community, namely that they have a place as long as they don’t ask for one. The price we pay for love, respect, and safety is silence. It’s painful, but it’s honest, and knowing where we stand may help us figure out what to do next.

As committed as I am to Orthodoxy and to raising observant children, the events of the past few months have reminded me to locate myself within the community. The choice I made at 13 years old to embrace halakhic Judaism allowed me to find and maintain structures that would, I had hoped, allow me to fit into a life that I desperately wanted. In some ways, it worked. In others, as I now know, my hopes that religious observance would change me were naïve and unrealistic. I don’t know if anyone could have told me that, but even if they had, I wouldn’t have wanted to believe them. I find Orthodoxy beautiful and grounding. Navigating its community, however, is lonely and untethering, sending explicit and implicit signals that make it hard to self-regulate while figuring out if this kind of belonging is ultimately sustainable.

Voice is a remarkable tool. When I was a student at YU, I didn’t have one, and even if I did, I wouldn’t have known how to use it. I think, on a certain level, we’re doing a better job than we ever have of finding ways to give voice to our children. We’re not done, but we’ve progressed, especially as the conversations have become prevalent. But, I wonder, what’s to become of these empowered voices when they come back to the communities that claim to have loved them in their youth? Will they work there, teach there, live and thrive there as full-fledged members of the tribe who are not just in but also out?

While the holiday season inspires self-reflection and personal atonement, it also harnesses the power of communal belonging. Full absolution demands that we live honest and authentic lives, embracing our messy vulnerabilities and learning from our regrets. While the mandate is true for the individual, perhaps we can expect the same from the community. To do that, we have to fall deep into our collective stories, while having the humility to know that none of us fully grasp the complexities of the picture, nor can we possibly own a singular, interpretative truth.

We’re all kind of hedging our bets here, and that’s extremely unsettling. When it comes to Jewish law, the lines will continue to be drawn. But it’s at that very point, that gray space, where we toe the line for one reason or another, that we open up the possibility that we may not have it all figured out, and if we’re going to err, perhaps it should be on the side of compassion and human dignity. However complex, all journeys are a series of first steps. They require a great deal of patience and the willingness to recognize that fitting in is not the same as belonging. It never really has been.