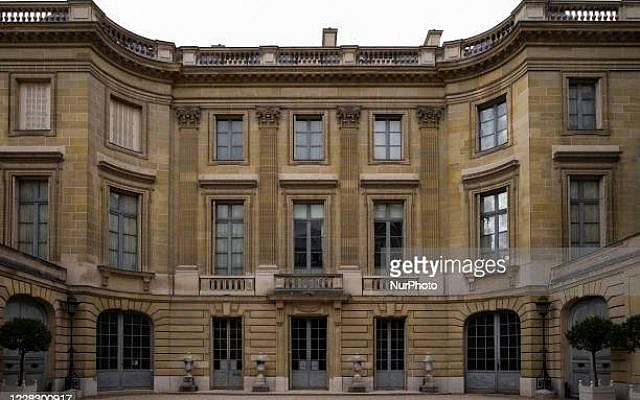 The Camondo Mansion in Central Paris, now a museum.

When I lived in Paris, I often walked through the Parc Monceau and passed the gilded Hôtel Camondo. Inside was one of the world’s greatest collections of eighteenth-century French furniture and art, testimony to the rise and fall of French Jewry. My grandmother was named Comando, and despite the different spelling, I always wondered whether there was a link to the famed French Jewish family.

Two recently published books about the French Camondos added to my intrigue about these potentially lost relatives.  James McAuley “The House of Fragile Things”  recounts the history of the Comandos and other French Jewish families who graced the stage of France’s Belle Epoque. In “Letters to Camondo,” Edmond de Waal, composes a series of first person letters to the builder of the Camondo Paris mansion, Count Moïse de Camondo.

The Camondo story surprised and saddened me. Born in 1860 in Constantinople to a Sephardic banking dynasty, Moïse moved to Paris at a young age. Although I knew that some French Jews had prospered at the end of the 19th-century, it came as a shock to learn of the full extent of their wealth or influence.   Moïse and other French Jewish financiers prospered in fin-de-siecle France. There was not just the Camondos. There were the Rothschilds, Ephrussis, the Cahen d’Anvers, and others.

Together, they financed France’s industrialization. They built some of the country’s finest mansions. They contributed to the flowering of the arts. They collected. The Impressionists painted their portraits.  Renoir’s image of a young Irene de Cahen d’Anvers illustrates the glamor of this generation of the French Jewish elite. Moïse became the preeminent collector of what he considered the finest examples of French culture – Ancien Regime furniture and porcelain.

“The choice to focus on late-18th-century France was not an arbitrary one for a Jewish collector like Camondo. The Enlightenment was the period when France became the first modern European country to grant the Jews full civil rights,” writes Yale professor Maurice Samuels. “the Musée Nissim de Camondo stands as a monument to the opportunities that the Enlightenment created for families like the Camondos.

This glittering generation came to a tragic end. As the influence of the Camondos and other French Jews rose, so did French antisemitism. The Dreyfus Affair erupted. Painter Pierre-Auguste Renoir was happy to take commissions from the Jewish patrons – while, according to author McAuley, despising them.  The comfortable world of the Camondos trembled.  And yet, they remained loyal to France. Moïse’s son Nissim died flying a French warplane during World War I.

Devastated, Moïse decided to leave his mansion and collection to France The Musée Nissim de Camondo opened its doors in 1936, following Moïse’s death. A few years later, the French government rounded up his surviving descendants, his daughter, Béatrice Reinach, and his grandchildren, Fanny and Bertrand, and sent them to their deaths at Auschwitz.

These days, governments around the world are returning stolen World War II art to their owners. Moïse left his collection to the French state – no one doubts the authenticity of his intentions and will. But the same French state murdered his family. All that marks this horrifying truth is a small plaque at the entrance to the museum; while France has made giant strides in coming to terms with its own Holocaust guilt in recent years, it could do more for the Camondos.

The new books tell this tragic tale in different ways. McAuley composes a scholarly, if accessible, history, while  De Waal addresses personal letters to Moïse that skip between past and present. The two approaches are complementary; I, for one, preferred McAuley’s account because it offered details about the Camondos and their French Jewish contacts.

My own Comando connection stems from my fathers’ mother whose maiden name was Pearl Comando. She was born in New Jersey in 1902 and died in 1967 when I was a few years old. Her father Simon Comando was born in Budapest. When the Camondos were making a fortune in Paris, my ancestors were fleeing Hungary. Several survived the Holocaust and ended up in Australia. Others went to Italy or even Chile. On a recent Zoom call, my relatives in Melbourne told me that Pearl’s brother Harry had safeguarded their funds sent to him and helped arrange their travel to Down Under.

Many questions about the Comando family remain unanswered, starting with whether we are related to the French Camondos. In a correspondence, author McCauley told me that the Camondo story begins in Spain, then goes to Livorno and Venice, then to Constantinople. There are Habsburg connections too; Moise de Camondo was the Serbian consulate in Paris for a while. “So it’s likely there is some kind of connection, but I’m not sure what it might be,” he says.

The Camondo Museum website says that the French government website acknowledges, without citing French complicity, that “during World War II, Moïse’s daughter Béatrice, her husband Léon Reinach, and their children Fanny and Bertrand died in the Nazi camps.” It goes on to say that “after their deaths, the Camondo family became extinct.”  Given my own family history, I’m not sure.

If anyone has more information about a connection of the French Camondos to my living Comando family, please contact me at bechikson@gmail.com.