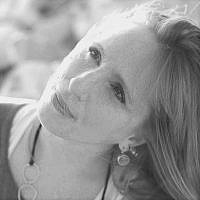 The Blogs
Debbie Berman
Apply for a Blog
Advertisement
Please note that the posts on The Blogs are contributed by third parties. The opinions, facts and any media content in them are presented solely by the authors, and neither The Times of Israel nor its partners assume any responsibility for them. Please contact us in case of abuse. In case of abuse,
Report this post.

Navigating dazzling white-hot stones, ablaze in the summer sun, I walk in her footsteps, seeking her out at every turn. 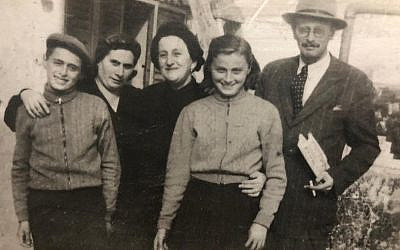 My mother survived the bitter winter frost as a young child hidden in the Budapest ghetto, while my grandmother endured the sadistic suffering of slave labor in the Dachau concentration camp. After liberation, miraculously, the family found their way back to their home at Damjanich Utca 49. But the property was soon confiscated and the Hungary they had known was forever lost, the freshly installed communist leadership permeated with hate and fear. Propelled by idealism, they decided to rebuild their lives in the homeland of the Jewish people. Jerusalem vistas soon provided the backdrop for my mother’s coming of age.

They arrived in the newly formed state of Israel during the tzena period – a time of austerity and economic restrictions. Frustrated, her father, Apu could not find steady work. Dapper and dressed to the nines, he smoked cigarettes they could not afford and read the paper obsessively looking for news of a better life. Eretz Israel was billed as a land of growth and opportunity. Invest in construction, he was told, and so he did, selling everything they owned to buy a state-of-the-art cement mixer. The mixer, along with a few possessions from their previous life, were packed into a container and shipped to Haifa port.

The family set sail to Israel, with little more than the shirts on their backs and the dreams in their hearts. They awaited the arrival of their shipment and its promised treasure, but their lift never arrived. Somewhere along the line it was intercepted, plundered. Was it the Hungarian communists? Was it stolen by Jews? After all, Herzl had summoned forth a Jewish state, with Jews playing all the roles, from the prominent to the mundane. In doing so perhaps he had ushered in a new breed of brash Jewish thieves.

Her mother, Anyu juggled several odd jobs. With magic hands she grew tomato plants, vines climbing the banister of their apartment building, heavenward, grazing the skylight, where their growth was ultimately reigned in. My mother snatched those red ripe tomatoes, taking succulent bites out of the juicy orbs like fruit. Taking big bites out of life as it lay spread out before her.

My mother flourished in Jerusalem, she blossomed like a dessert flower. Peering at me from an old photograph, she is a lanky beauty wearing a sweater that she recalls in a heavenly shade of blue. I imagine how it must have set off the glow in her eyes as they adjusted to the scorching Jerusalem light.

Their home on Shmuel Hanavi Street was only a few meters from the border where Jerusalem was crudely split in half. During tenuous cease-fires, nighttime gunfire was common, they learned quickly to live with the shutters clamped closed for protection. Inside it was safest for the children to sleep on the cool stone floors. Anyu embroidered tiny floral bouquets on white sheets transformed to a cover for the challah, the warm fragrant braided bread that graced their shabbat table every week.  She crafted delicacies from the meager rationed ingredients they were allotted. My mother carried trays to the soldiers stationed on their rooftop, charming them with her innocence and grace. Apu sat crouched near the radio broadcast, drinking in the news, longing for the foreign syllables to drip into his bloodstream.

Out in the darkness, just past the shetach hefker (no man’s land), Jerusalem the ancient city, taunted them, object of thousands of years of prayer. No entry border signs decreed that the old city, the heart of Jerusalem, remained forbidden to them. It lingered, in such close proximity, but out of reach, to be visited only in their dreams.

Anyu read tattered postcards from her brother Herman sent from the city of Montevideo in faraway Uruguay, South America – telling of abundance and prosperity. The correspondence filled her with melancholy and sorrow. Herman was one of her two brothers that had survived. The ghosts of her dear father, her brothers, and of all of her loved ones whose lives were senselessly and brutally cut short by the Nazis wrath – suddenly haunted her at every turn.

Anyu longed to be reunited with family, she yearned for safety and refuge. She had grown tired of the uncertainty and tension of war, tired of waiting on long lines for rationed oil, sugar and margarine and tired of hunting for the shreds of her Zionist dreams. The reality of the young state of Israel was nothing like the ideal they had envisioned. To mitigate Anyu’s heartache – as if relief for such heartache could even exist -the family chose to put an end to their struggle for survival. They made plans to follow Uncle Herman to a life of comfort and ease.

But after five years in Jerusalem my mother had become a sabra, she felt at home in Israel and was devastated when told that she had to leave. Her grandmother, Safta, who would be staying in Israel, took my mother to see the great Belzer Rebbe. Together they entered his sanctuary, a small room in a modern Bauhaus style apartment on Achad Haam Street in Tel Aviv. Crossing the threshold, from the oppressive summer heat, my mother felt instantly dazed, cool air flowing through the rooms. Her first encounter with air conditioning, rendered her spellbound. Old and hunched over, saucer size pale blue pools for eyes, the Rebbe glanced at her, pierced through her soul.

Safta knew the Rebbe well, from the old country. Between them lay an unspoken language of memory, conjuring the last night before he was smuggled out of Europe, from Poland through Hungary, enroute to Palestine. Her husband, Josef Salgo, a Jewish community leader in Budapest, played an instrumental role in saving the Rebbe’s life. On that last night the Rebbe held a farewell tisch (literally a table in Yiddish – a term used to describe a gathering of Hassidim around their leader), with Safta’s pastries being passed among his devoted followers. It was in her home that his heart wrenching screams were heard when his peyot (sidelocks) and beard were shorn to complete his disguise as a gentile so that he could slip out of Hungary unnoticed.

Now, in this new old land, she addressed him in Yiddish in familiar tones, and implored of him, “Tayere Rebbe…tell me what to do, they want to take the girl out of Israel, away from the holy land. But she thrives here, see how she grows strong and free. She should stay here with me. She should be raised in Jerusalem.” The Rebbe was silent for a long moment, contemplative and serene. Finally, he uttered his decision “Family, my dear child, must always remain together. The girl must leave”.

And so it was. My mother and her family set sail to recreate themselves once again – leaving behind Jerusalem and her golden light, her otherworldly meditations. They gently cast off the burdens of redemption, headed for new world promises, seeking peace.

Almost 70 years have passed since my mother’s departure from Jerusalem and today I am blessed to make my home just outside of the city that she loved so much. Israel has become the start-up nation, long gone are the growing pains and rationing of early statehood. Sometimes, in the midst of my rush and routine in modern metropolitan Jerusalem, I stumble upon traces of my mother’s life here all those years ago – a hand painted sign in a pharmacy window on Ben Yehuda Street or the Jerusalem lite rail tracks paved over what was once no man’s land and the border that blocked Jewish entry to the old city. In those moments, frozen in time, it’s as if I can see the city through her eyes as it once was – as they both once were – young and on the threshold of who they were destined to become.

About the Author
Debbie Berman, a native of NYC, has lived in Israel since 1993. Debbie studied Political Science and Communications at Queens College, was a Tanach and Jewish Studies Fellow at Matan and is a Wingate Institute certified Dance and Movement Instructor. She currently serves as Marketing Communications Coordinator for a Non-profit organization in Jerusalem.
Related Topics
Related Posts
Comments