In 1988 at the age of 20, David Leach dropped out of university and went to Israel to volunteer on a kibbutz. Leach wasn’t Jewish; he didn’t know the first thing about farming. All he had heard was that a kibbutz was “a cooperative farming village where backpackers could swap manual labor in fields or factories for room and board.” The idea of living in a Biblical, exotic land filled with history and adventure appealed to him, as did the thought of living, at least for a short time, like a true utopian.

Fast forward twenty-five years. Leach, by then an acclaimed journalist and author of literary nonfiction, returned to Israel in search of the freewheeling days of his youth. The kibbutz movement, based on the principle of “From each according to his ability, to each according to his need,” was celebrating its centennial. Leach wondered if the kibbutz and its “bold utopian spirit had taken flight and if that original willingness to experiment with new ways of living still existed.”

In Chasing Utopia: The Future of the Kibbutz in a Divided Israel by David Leach (ECW Press, September 2016), the author chronicles not only the radical transformation of kibbutz life but also his discovery of unexpected utopian communities in which both Jewish and Arab citizens struggle to coexist.

First stop on Leach’s journey is his return to Kibbutz Shamir, a community in the Upper Galilee with painful memories of the deadly terrorist attack in 1974 in which three women were murdered, including a 22-year-old volunteer from New Zealand. Leach worked in many different branches of the kibbutz, including polishing lenses in its optical products factory. By the time he returned, Shamir Optical Industry had gone public and was traded on NASDAQ. 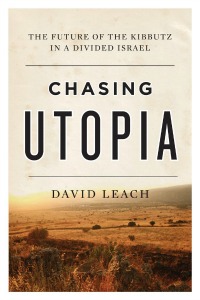 With this as a starting point, Leach travels the length and breadth of the country, tracing the decline of the kibbutz movement’s original vision of being a peaceable utopia in the Promised Land. He sees that kibbutzniks are no longer considered visionaries leading Israel’s social and political progress. The kibbutz has changed, its abandoned dining rooms the first step in the privatization process.

Leach’s nostalgia for the “good life” he experienced as a young man and his belief in the value of forging a lifestyle placed somewhere between radical socialism and the “dog-eat-dog capitalism consuming the world” lead him to continue his search further, beyond the perimeters of the kibbutzim he visits.

The scope of this book is much wider than just being a comprehensive treatise on the decline of the kibbutz movement. Efforts to build utopian societies are found elsewhere, the author informs us. His travels take him to Nes Ammim, the ecovillages of the Arava, the hilltops of the Galilee, and even to the planned Palestinian city of Rawabi. The idea of utopia is not limited to the kibbutz framework.

Leach states his desire to see these “new experiments in radical sharing, co-existence, and moral dissent take root and grow broad and strong, as the kibbutz once did.” And, in line with the political idealism that frame his wide-ranging study of utopian socialism, the author concludes with the hope that these new societies “can shade a path for the peoples of Israel and Palestine to walk together into the future.”

Part memoir, part travelogue, and always a highly entertaining narrative nonfiction review of Israel’s unique social communities, Chasing Utopia is in many ways an exploration of modern day Israel itself.

David Leach is the chair of the Department of Writing at the University of Victoria in British Columbia. His first book, Fatal Tide: When the Race of a Lifetime Goes Wrong, investigated our modern appetite for “extreme” experiences.