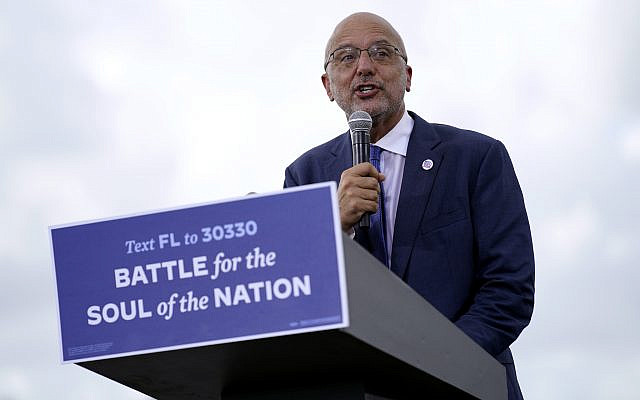 When Democratic Congressman Ted Deutch rose to speak in the US House of Representatives debate on Iron Dome funding, he had intended, he said, to declare “how important it is for us to stand up against terror and the terror strikes against Israel launched by the terrorist group Hamas.” Instead, he found himself compelled to respond to an earlier speech by one of his fellow Democrats, Congresswoman Rashida Tlaib, effectively accusing her of antisemitism.

It was a useful and comforting reminder that “the Squad” is not representative of the Democratic Party writ large. Nevertheless, it is surely legitimate to be concerned at the direction of travel of the American left when the younger generation of activists seem to be resolutely pursuing a “woke” agenda, which — like all versions of far-left politics — views Zionism as racism, and Israel as an illegitimate colonialist or apartheid state.

On the other side of aisle there is little cause for comfort. For all that Donald Trump did for Israel, he was an absolute godsend to the racist and antisemitic far-right in the United States. It’s worth remembering that his nativist rhetoric and dog whistles to white nationalists date back to before his first presidential campaign, when he obfuscated in response to former Klan leader David Duke’s support for his candidacy, pretending not to know who Duke was and refusing to disavow the KKK before he had “looked into” who they were. We now have Republican legislators joining white supremacists in rallies defending the January 6 rioters, and the highest-rated host on Fox News, Tucker Carlson, under fire from the Anti-Defamation League for “race-baiting” by consistently invoking “white replacement theory,” the White Supremacist trope which inspired the infamous “Jews will not replace us” chant at Charlottesville.

The ADL’s calls for Carlson to be fired have been condemned by many on the right, including Congressman Matt Gaetz, who bizarrely accused the ADL itself of racism. Not incidentally, Carlson and Gaetz are among the most unapologetic supporters of the former president. As on the “progressive” left, on the Trumpian right, the tendency to give succour to antisemites goes hand-in-hand with a contempt for liberal democracy.

The Squad and other “woke” activists view America and the West as white, corrupt, patriarchal oppressors of minorities — Israel is portrayed as the epitome of “white oppression” of a dark-skinned minority (yes, most Israelis today are descended from immigrants from North Africa and the Middle East, but this is not exactly a fact-based ideology). Meanwhile the illiberal nationalists who see Trump as their savior are enmeshed in a personality cult which insists that they were cheated out of victory, that their political opponents are traitors, and that the fulfilment of democracy requires the restoration of the “true” president. History teaches us that antisemitism — not only the world’s most ancient prejudice, but also its oldest conspiracy theory — thrives in an environment where truth is no longer of value. As Abe Foxman told me in a recorded interview:

Trump destroyed truth. Truth is the biggest weapon we have against the lie of antisemitism. Antisemitism is a lie… If you destroy truth you’ve destroyed the one vehicle you have to fight antisemitism.

Throw in ethnic nationalism and anti-immigrant populism, and you have the perfect environment for Jew-hatred to flourish.

I have conservative friends who believe only Trump can save America from the far-left, with its cancel culture and anti-Americanism. This is a ludicrous position on its face; that the right answer to a movement that threatens democratic values is a president who is himself the single biggest threat to American democracy since the Civil War.

The answer to the ignorance and prejudice of the Squad and its fellow travelers lies with moderate Democrats like Ted Deutch. Similarly, the best response to Trump and his cult followers comes from Republicans like Liz Cheney, who are willing to fight for a moderate, liberal-democratic, conservatism. In American politics today, the most important fault-line is not left vs right or liberal vs conservative; it’s the moderates on both sides vs. the extremists on both sides.

Israeli Jews — who avoided our own far-right-influenced government at the last election — should think twice before wishing for Trump’s return; at least if we intend to genuinely reject antisemitism in all its forms and from wherever it comes. It is no coincidence that America’s Trump-apologists and alt-rightists like Tucker Carlson and Steve Bannon are avid admirers of Europe’s illiberal nationalists like Viktor Orban. Orban, who has crushed the free press and an independent judiciary in Hungary, also combines strong support for Israel with a penchant for antisemitic tropes in domestic politics. Much of today’s extreme-right agrees with the extreme-left that Zionism equals racism; it’s just that the right sees that as a positive.

Not for the first time in history, the fight against antisemitism is also the fight for liberal democracy. Jews on both sides of the political aisle should be rejecting the extremes, and championing their party’s moderates.