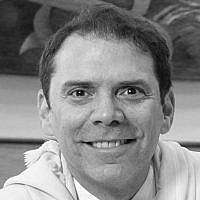 The Blogs
Fabian Werbin
Apply for a Blog
Please note that the posts on The Blogs are contributed by third parties. The opinions, facts and any media content in them are presented solely by the authors, and neither The Times of Israel nor its partners assume any responsibility for them. Please contact us in case of abuse. In case of abuse,
Report this post.

Looking back is an exercise that may help us more effectively understand the present.

Events that mark our lives and change the world leave an indelible and enduring dent in our fragile memory. It is very likely people remember what they were doing when JFK was assassinated, when man landed first on the moon or during the attack on 9/11. Even if we tried to polish, refine, or erase memories, certain smudges will always remain.

Every four years, inauguration day marks the official beginning of a US presidency. Since 1937, when Franklin D. Roosevelt was sworn into office, January 20th (unless it falls on Sunday) is the chosen day for that ceremony.

I am an immigrant and I came to the US from South America more than twelve years ago.

As the quill of the scribe leaves marks in the parchment, the passage of time leaves recollections that are going to be impacted by time and shared with future generations.

The inauguration from 2016 has left just such an imprint.

Four years ago, on the day of the inauguration, my wife and I walked into the office of our immigration lawyer with the intention to begin the formalities, paperwork and procedures to become US citizens. A small step for a couple, one giant leap for our family.

Four years later, and more than two years after we became US citizens, thank Gd, inauguration day is arriving.

What will I be doing this year on Inauguration day?

I will be studying Torah with a group of friends.

There was a discussion among this group considering whether or not I should continue teaching our weekly class on January 20th. We agreed the class should continue as programmed. I want to tell you why this discussion was important and why we made the decision we did.

Rabbi Marshall T. Meyer Z”L who revolutionized the South American Jewry in the ‘70s and ‘80s and was a critical influence to many South American rabbis, taught that a Jew should live with a Bible on one hand and a newspaper on the other hand, complementing each other. A modern Jew should live connected to the current events and the history and tradition of the Jewish people as well.

I grew up with that idea. It is a profound and tangible idea.

Four years ago, I had my newspaper in my hand; this year I will have my Tanach.

The newspaper and the Tanach, two halves of a token.

But this time is a special time.

I want to share with you some texts of our tradition to explain how special this time is.

When the Israelites were in the desert, among the commandments they received was one called “machatzit hashekel” (half shekel) (Exodus 30: 11-16).

The purpose of this mitzvah was to support the Temple and to count the people as well. The half shekel was traditionally given in the month of Adar and the Israelites were commanded to bring half of a shekel and not a full one, symbolizing that we need each other to be complete.

A Midrash (Bamidvar Rabbah 12:3) teaches that Moses had troubles understanding what exactly half a shekel meant, therefore God showed Moses a perfectly polished, pure coin of fire that represented the half shekel.

But only God can create perfect coins. Consequently, the Mishna (Shekalim 1:6) teaches us about a small coin called “kalbon.” This small coin or piece of a coin was added together with the half shekel adding a bit extra to ensure that the donation that was given to the Temple had indeed the weight (i.e. value) of a half-Shekel.

The commentator Obadiah Bartenurah explains that the word “kalbon” קלבון is composed of two words, קל  and בון (“kal” and “bon”) meaning: easy to understand. It is simple to understand why we need to add extra.

This time each of us needs to add his or her own “kalbon”. Each of us need to add a bit extra. It is simple to understand why.

This time is special. It is not enough with the newspaper and the Bible. We need to add a bit extra.

Inauguration is a time to reflect and look to the future with hope.

If we want to heal our country, if we want to overcome our society’s flaws and imperfections, we need to add a bit extra.

This time it is not enough to consider the sum of individuals, halves are not enough. We need to be a whole people again.

About the Author
Fabian Werbin is a rabbi at Congregation Beth El, Bethesda. He was born and raised in Argentina, married to Patricia and father of 4 children. Since 2008 he resides in the US.
Related Topics
Related Posts
Comments