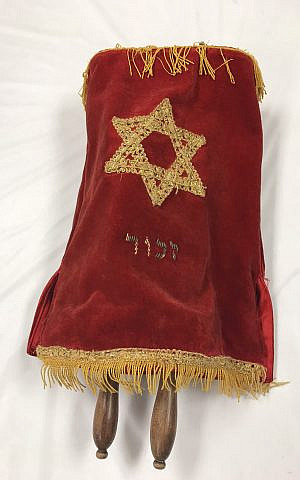 
Producing the The Tattooed Torah has been life changing. I was inspired to dig deeper, better understand Little Torah’s journey from Brno to Chicago, so I retraced the path. My soul had been yearning to face the reality of my People’s/Little Torah’s history. The experience was profoundly meaningful… 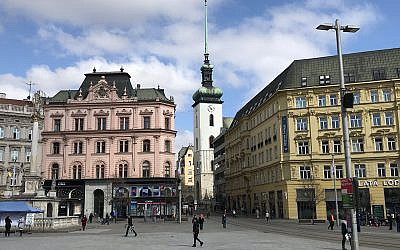 Brno town square. Beautiful but considered dangerous, where Jews were rounded up and taken away.

Continuing to build the team: #13 Little Torah. The Journey…Brno-Prague-Michle-London-Chicago. I flew to Prague (with family) during Passover, (holiday of redemption) then drove three hours to Brno, Little Torah’s birthplace. Walking through the streets of Brno felt eerily familiar, the town square and building facades were similar in style to the book/film illustrations by Martin Lemelman. That made me smile…

We met the Rabbi at the Jewish Community Center/ Day School and gave him a copy of The Tattooed Torah. We told him we were producing an animated short based on the children’s book, written by Marvell Ginsburg about Torah scrolls confiscated by the Nazis from his community. He was deeply moved. He told us about the Jewish life in Brno (300 people), second largest to Prague (1500.) He mentioned their only schul (synagogue) and asked if we would help make the minyan (a quorum of ten men required to conduct services). 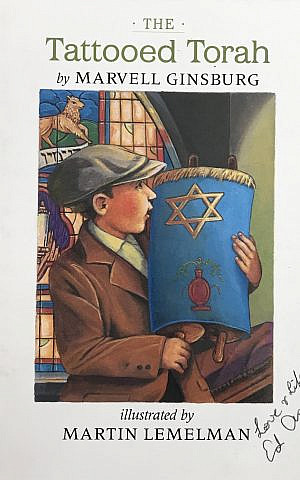 Autographed copy of The Tattooed Torah by Narrator Ed Asner

We attended the Brno schul. The exterior looked industrial with no visible Jewish markings. We knew we arrived when we saw two Israeli security guards outside. The schul was beautifully restored. We heard the Torah chanted from a scroll from Brno, hidden during the war and met the survivor who reclaimed it. 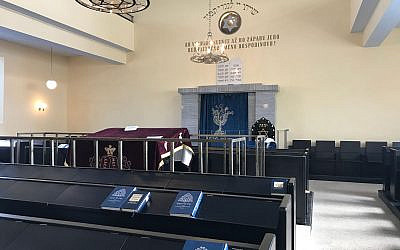 Only remaining Synagogue in Brno.

Our next stop, was Michle Church (former synagogue) which had warehoused Little Torah. Finding the church felt miraculous, being there surreal. We met the Minister and gave her a book. She looked at it in disbelief and couldn’t wait to share it with her congregants. She proudly told us the history of her church and the scrolls.

After WW II the communist government wanted to use the warehouse in Prague where the Nazis had stored 1,564 confiscated/numbered Torah scrolls. Thinking the scrolls had monetary value the government warehoused the scrolls in various churches and buildings in the area. The neglected scrolls remained in storage for two decades. 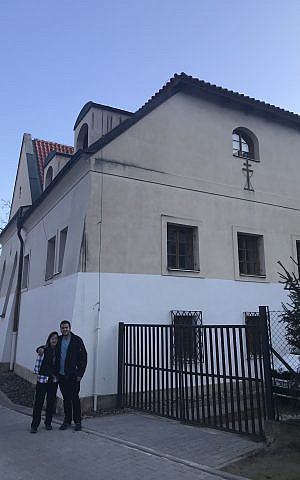 Before leaving Czechia, we visited Theresienstadt ghetto (outside of Prague) then continued on to Poland to participate in the March of the Living, motl.org. We visited Jewish ghettos, concentration camps, Jewish cemeteries, mass grave sites and learned more about the Holocaust. We become witnesses.

One bright note, serendipity intervened and although I did not make it to London Brett Kopin (Co-screenwriter) our son did. He learned more about Westminster Synagogue, The Memorial Scrolls Trust, and saw the reclaimed scrolls completing that leg of the journey.

In 1964 a businessman from London learned about the confiscated Torah scrolls in Czechoslovakia (Czechia). He arranged to purchase and ship them to Westminster Synagogue. When the scrolls arrived a scribe knocked on the door inquiring if the synagogue had work for him? The man was kept busy for the next twenty years repairing and restoring scrolls. The universe works in mysterious ways…Legend or Truth…all good. 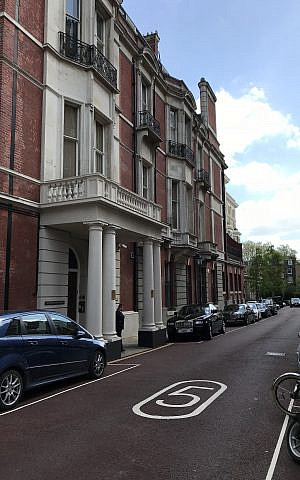 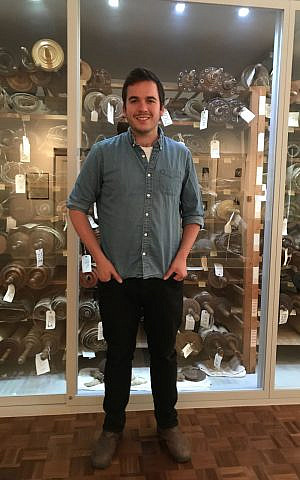 Brett Kopin (Co-screenwriter) standing in front of the reclaimed scrolls.

In 1972 Tommy Weil (age 8) was in second grade at the Solomon Schechter Day School in Chicago, the year his father Art Weil was president of the school board. Tommy was learning to read/chant from the Torah and told his father the scrolls were too big to carry. Art (had Czech roots) heard about the scrolls and was interested in obtaining one for the school. Art flew to London on his next business trip and visited Westminster Synagogue. He selected a small Torah, returned to Chicago and had a new mantle (cover) made. The school/community welcomed Little Torah in a dedication ceremony. 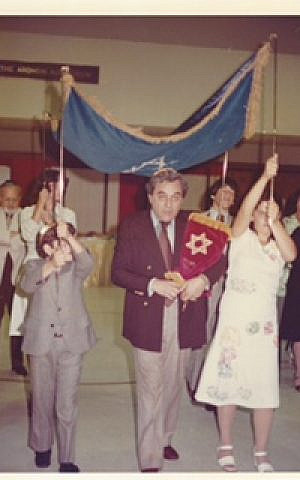 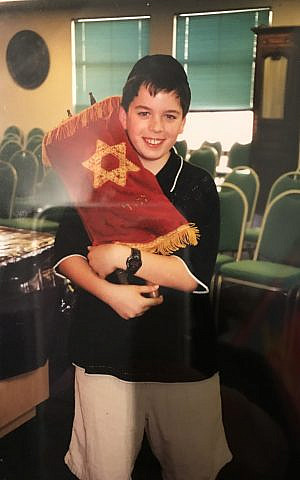 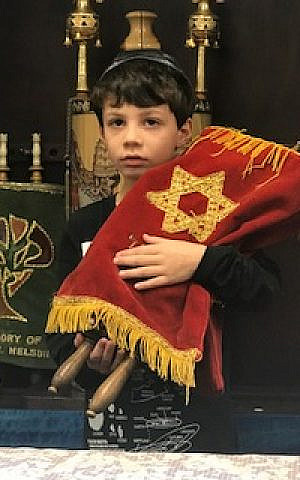 Our film team visited Solomon Schechter. It was inspiring to see the next generation learning and reading from Little Torah. Tom Weil, Brett Kopin and Jared Nathan (see above), three generations of Schechter students with Little Torah. 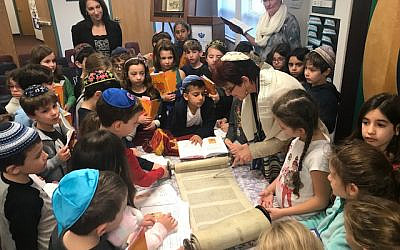 Little Torah getting the honor it rightfully deserves. 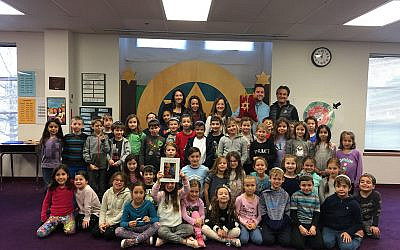 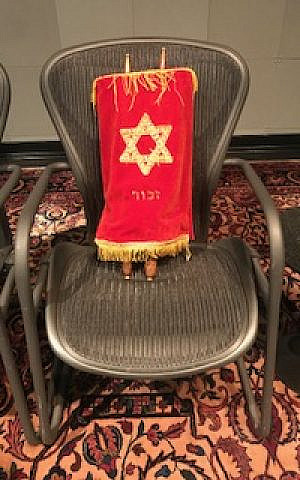 Premiere weekend, Little Torah treated as a guest on the stage with the team.

Why the Nazis saved the 1,564 Torah Scrolls?

Prominent Jewish businessmen in Prague convinced Nazi officials to create a museum displaying Jewish artifacts. The Nazis created an elaborate system cataloguing the people they were enslaving and killing, and catalogued the Torah scrolls as well. Each Torah was numbered/tattooed and recorded. The Nazis wanted to humiliate us, desecrating our most sacred possession before killing/destroying us…A bit of irony, the cataloguing enabled us to locate the origin of each Torah.

Inspiration for the Title 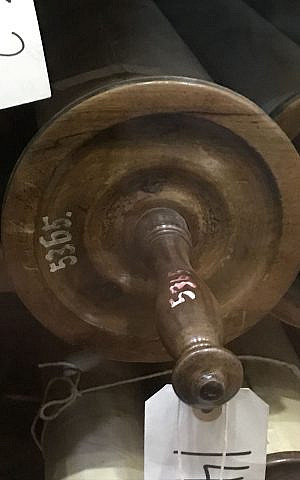 Czechoslovakia (Czechia) was the only European country which systematically saved Torah scrolls. Each scroll represents a previously thriving Jewish community (Jews lived in Europe over 1000 years). Countless souls/generations chanted, blessed, studied, and honored these precious scrolls. The impact each restored scroll has on its  community is priceless. We are proud to capture one of the most inspiring stories from the Holocaust. The photo below shows a reunion of scrolls. Memorial Scrolls Trust. www.memorialscrollstrust.org 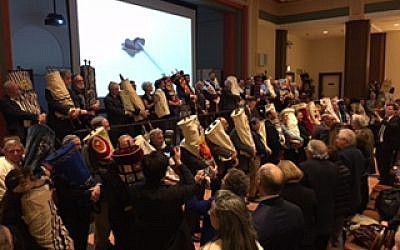 A reunion of 50 reclaimed scrolls.