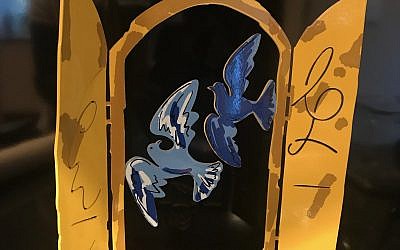 We were given a beautiful gift several years ago by our Israeli buddy Elie Spivack. Elie is a fine cabinet and furniture maker who built much of the furniture and cabinetry in our Jerusalem home. We were thrilled to find a young adult who was born in the US, brought up in Israel, and thriving. I spotted his genius… We began working together on projects, and learned much from each other.

Elie became a Ben Bayit (family member). A few summers ago he came to Chicago and stayed with us. We attended Neo-Con (a design trade show), discussed furniture details, and business. He gave us a sculpture called “Window to Jerusalem” by an Israeli metal artist, Gerstein. I love the name and try to visualize just beyond the cutout of the window into Jerusalem. I have since gained an appreciation for the various perspectives of the title.

Aside from the tour guides perspective, where you are taken around and told specific narratives, there remains the challenge of trying to experience the REAL Israel. Most tourists only see the concierge level Israel: coach bus, hotel staff, restaurants, diplomats, institutions… When our friends ask us why we bought in Israel instead of staying in a luxury hotel, we say we want to experience and live in the REAL Israel.

I wish others could see the Israel we see. We live amongst ordinary, hard-working Israelis raising their families. They are proud, strong, creative, brave, and teach their kids to have open hearts and co-exist with their Muslim cousins. I work with Jews, religious and non religious, Muslims, and Christians, and we all co-exist. We acknowledge it is complicated in the region and understand it’s in everyone’s best interest to get along.

We have a Muslim village around the corner from our neighborhood called Jabal Mukaaber. It is located near the Tayelet/Haas Promenade (a park overlooking the old city, where most tour buses go). Many of the villagers own Israeli passports (their choice), and all are residents of Jerusalem. They have untethered access and work opportunities in the very same grocery stores, restaurants, malls, gas stations, hospitals, clinics, movie theaters, universities, parks, beaches, museums…as we do. The hallmarks of Israeli life.

I happened to be in Israel during the 2015 Intifada. Young Muslim men (some from Jabal Mukaaber) were running through the streets of Israel slashing Jewish throats and throwing large rocks at cars. It felt like a movie set. Sirens were blaring and windshields were shattered.

I was returning to Jerusalem from visiting friends in Zichron Yaakov. I noticed steam pouring out from under the hood of my rental car. I pulled into a gas station on Emek Refaim. The owner came out. I was terrified. He introduced himself as Kahlil and said his name meant friend. I recognized the name. I told him Kahlil Gibran was one of my favorite writers, a Muslim poet. We both smiled. He gave me a bottle of water and sat with me until a driver from my car agency came to pick me up.

Kahlil was kind. He referred to himself as an Israeli Arab. He lives in Beit Safafah, a unique neighborhood where Jews, Christians and Muslims live together in Jerusalem. He told me he did not associate with people who wanted Jews gone and were terrorizing our neighborhoods. All he wanted was to live in peace and raise his family. I thanked him for his kindness. I think of him often.

I think of Elie often as well. We are constantly striving for perfection on our customers’ pieces, not satisfied with “good enough.” He would remind me of the Israeli attitude of “why should I bother to…” I finally understood that when one lives through terror, striving for perfection seems trivial. He is always fighting that mentality. We help each other understand.

What window do I see Israel through? I see a young country of which I am extremely proud, trying its best…

You can see Elie’s work at ElieSpivack.com