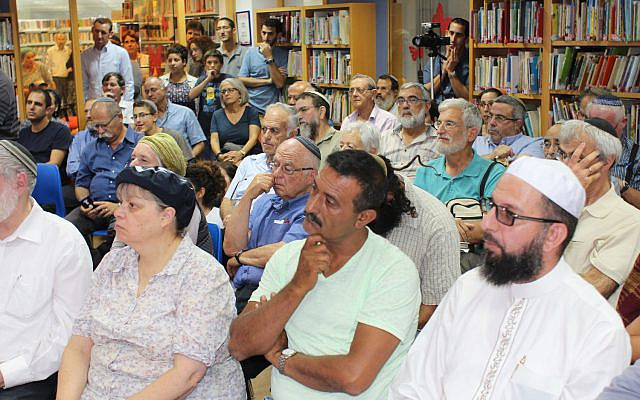 Jewish settlers and Palestinians attend an interfaith panel discussion co-hosted by Roots at the Public Library of Efrat (Friends of Roots, 2021).

The past few months have seen significant milestones in funding for grassroots movements promoting peace and reconciliation between Israelis and Palestinians. On December 21, Congress passed the Nita M. Lowey Middle East Partnership for Peace Act of 2020, which will invest $250 million over the next 5 years into peacebuilding and economic cooperation in Israel-Palestine. Then, on February 22, USAID’s Conflict Management Mitigation (CMM) grant application opened with a $9 million availability with an emphasis on cross border work.

I have written that increasing funding to people-to-people organizations may ripen the prospects for peace between Israelis and Palestinians because it would help bring more people together for dialogue. However, I have come to realize that it could go even further than that. The increased funding to these grassroots movements may create an environment for peace, not only because it will allow them to reach out to larger quantities of Israelis and Palestinians, but also because it may enable them to go outside their network.

Normally, when one thinks of Israeli-Palestinian dialogue, one may think of a secular Ashkenazi from Tel Aviv and a Palestinian from Ramallah meeting up in Jerusalem for hummus and to listen to the other’s narrative of the conflict. However, the recent increase in funding will also be going to organizations that work with Israeli and Palestinian communities that have not been part of the traditional peace camps.

For example, Roots is a member of the Alliance for Middle East Peace (ALLMEP) that promotes dialogue specifically between Jewish settlers and Palestinians. It was originally founded in the Israeli settlement of Gush Etzion to create dialogue between the local Jewish settler and Palestinian communities and, since then, has expanded throughout the West Bank.

Beforehand, I thought Jewish settler-Palestinian dialogue was neither necessary nor practical, but after attending several webinars hosted by Roots over the past year, I saw that dialogue between Jewish settlers and Palestinians is not only possible, but is in fact a necessity for peace.

There are a couple of reasons why incorporating Jewish settlers into Israeli-Palestinian dialogue is essential for a comprehensive peace agreement. One is because any viable peace agreement will need the support of a plurality of people on both sides, which includes the religious communities.

The peace camps in Israel-Palestine have historically been dominated by the more secular communities while neglecting the religious communities. This was clearly a mistake, as it prevented previous peace processes from moving forward. As Director of International Relations at Roots Rav Hanan Schlesinger explained to me,

“Religious people from both sides were among the major groups that ultimately derailed the Oslo process. That process marginalized them and made them enemies of peace. Any future peace process cannot make that mistake again. Observant Muslims and observant Jews will have to be a central part of the process…The settlers are to a large degree observant Jews with a deep connection to the land, just as we mind among Hamas on the other side. These are the people that a future settlement depends on.”

Another reason why Jewish settlers should be included in Israeli-Palestinian dialogue is because resolving an intractable conflict requires addressing the root of it. Again, initially, I was skeptical of including Jewish settlers into dialogue sessions because I thought their narrative, which is that all of the land between the Jordan River and Mediterranean Sea belongs to the Jewish people, was irreconcilable with peace. However, I now realize that it is precisely because they uphold such a maximalist narrative that makes them well suited to participate in reconciliation efforts.

The conflict between Israelis and Palestinians is not primarily driven by their day-to-day experiences within the conflict, but rather by their deeper narratives. When Israelis and Palestinians come together for dialogue, they are not just talking about the hardships Palestinians encounter under Israeli military rule or Israelis’ fears of terrorism. To be sure, the Palestinians’ experiences under occupation and Israeli security concerns are certainly significant parts of their respective stories that will need to be both heard and addressed, but they do not represent the root of the conflict.

The root of the conflict between Israelis and Palestinians is each side contesting that all of the land between the river and sea belongs to them. When Israelis say that all of the land belongs to the Jewish people and that they have the right to build settlements in Hebron just as much as they do in Tel Aviv, that is what the Israeli-Palestinian conflict is. When Palestinians demand a full right of return for the refugees and that they want to “free Palestine from the river to the sea”, that is what the Israeli-Palestinian conflict is.

When Israelis and Palestinians come together for dialogue, it is precisely those maximalist narratives that need to be heard and reconciled with in order for there to be peace. The Jewish settlers are the very community that represent the core of the Israeli narrative and that is why their inclusion in dialogue and reconciliation efforts would be so impactful and significant in the long-term.

Noor A’wad – a Palestinian from Bethlehem and an active member of Roots – explained to me how Roots creates a safe space for Palestinians like him to have dialogue with Jewish settlers of all people:

“It’s hard to…(have) dialogue with Israeli settlers…because…settlers by default…are against a Palestinian state, so it feels like we on the Palestinian side…have to give up on our national aspirations if we are having dialogue with Israeli settlers, but that’s not the case in Roots because at Roots we are talking about creating reconciliation between the two nations, the two national identities, and to create a solution that respects both peoples’ desire for national aspiration or self-determination, but at the same time to recognize both peoples’ connection to the entire land.”

Indeed, even if there is going to be partition as a political settlement to the conflict, each side will still need to recognize both peoples’ connection to all of the land. For Palestinians, they need to understand that the Jewish people not only have a connection to places like Tel Aviv and Haifa, but also have a connection to places like Hebron and Bethlehem in what they see as Yehudah ve-Shomron (also commonly referred to as the West Bank or Palestinian Territories). Reciprocally, for Israelis, they need to understand that the Palestinians have a connection not just to Ramallah, but also to Jaffa and Haifa in what they call Filestine el-Dakhel (also commonly referred to as Israel proper).