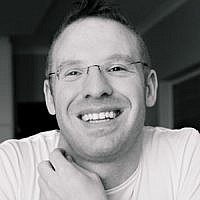 The Blogs
Chaim Ehrlich
Apply for a Blog
Advertisement
Please note that the posts on The Blogs are contributed by third parties. The opinions, facts and any media content in them are presented solely by the authors, and neither The Times of Israel nor its partners assume any responsibility for them. Please contact us in case of abuse. In case of abuse,
Report this post.

It truly pains me to bring this up again, but perhaps some real change will come from this article, not just some fleeting acknowledgment.

It was on the morning of 18 November 2014 (exactly one month ago) that two murderous terrorists, barbarically and savagely slaughtered four holy rabbis in the middle of t’filat shacharit (morning service) and injured many more – at the Kehilat Bnei Torah Synagogue in Har Nof, Jerusalem.

The horrors of that story have not left me. I fasted a personal fast on the day following. I cried for a week. I had the greatest test of my Jewish Faith in those moments, because who could expect let alone contemplate, such a heinous crime?

But in the hours and days following the Jerusalem Synagogue Massacre, something else altogether took place, which I would like to bring to your attention. Images of the murdered rabbis were shared all over social and traditional media. Most notably were those of who were still wearing their t’filin (phylacteries). As their holy souls hovered around their bodies one last time before ascending to the highest heavens, down here on earth, many people were subject to a tragedy much greater than the one that took place in the Synagogue that day.

The tragedy was the cheapening and devaluation of the Almighty’s Name, the profanity of otherwise holy Jewish symbology. The tragedy was sharing imagery of bloodied and dead Jews wearing their sacred garb; wrapped in their beautiful t’filin. The tragedy was that in our desperate attempt to garner mass pity and global sympathy, we failed to see – that in the long run – we were not helping the cause all, but causing further damage to an already threatened way of life.

As I mentioned in my note back then, t’filin is about holy matrimony, a commitment of the absolute love and devotion to God; [and once again, no one on Earth – no matter who they claim to be – knows anything real about God, HaShem, the Almighty, the Creator, the Source of all things, the Master of the Universe, the Holy One, etc]. The love and devotion that we speak of, is the love for God who created mankind, nature, fauna and flora, values and ideas that represent everything which we can relate to, including: honesty, loving-kindness, justice, peace, building the world, being a good person and a contributing member of the human race in whatever which way – among infinite others that we hold dear.

These are the promises and pledges to which we recommit, through the wrapping of t’filin. One of the many words associated with t’filin is ‘tif-eret’ – translated as any one or all of the following English words: splendour, glory, grandeur, beauty, majesty, elegance, dignity, refinement, nobility, magnificence – all words one would use to describe a bride and bridegroom on their wedding day.

Social media is a wild, wild animal. It’s unpredictable, it’s crass, it’s temperamental, it’s distractive and disruptive, it’s judgmental; and frankly, it’s all the things we don’t really want in our lives. But it’s here, and it’s here to stay. In that case then, we have an absolute obligation to start taking control and responsibility for what we POST and what we SHARE. The effects of a posted status written in rage, with emotion, religious fervour, opinionated beliefs, etc (of which I too am ashamedly guilty) can be devastating far beyond what we see. And the effects of a shared image (no matter how justified or not) can literally change lives and have an impact far beyond what we know.

As the Nation of Israel, we have a unique and singular task in this world, and that is to be a Light unto the Nations. If our rabbis and our leadership are not imparting that to us on a constant basis, this is certainly cause for concern and we should speak up about it. I cannot tell you how many times I encounter people who are too afraid to speak up about injustice, for fear of losing their position in the community, or for fear of not being politically correct! What nonsense. By NOT speaking up about the countless causes with which we identify, and by NOT rectifying the negative imagery that is shared around the globe instantaneously, we betray our very purpose and mission in this world. If we don’t make firm decisions and take concrete steps towards ‘tikun olam’ – ‘resolving the issues of the world through social responsibility’, how else can we expect The Redemption?

For that reason, if we really feel the need to share images of t’filin, let them rather be ones like this – for at least this image sanctifies The Name and elevates the imagery of sanctity and light in our often, dark world. 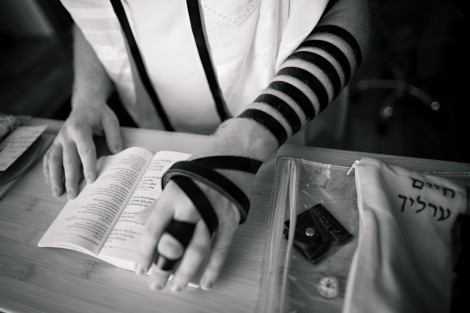 As we continue to publicise the miracle of Chanukah through our many shared images of light, let us be even more conscious and thoughtful about the narrative that we share both in the coming year of 2015 and for all time…

About the Author
Designer by trade, committed member of the Nation of Israel by faith, writer and philosopher by choice. I love Life and am blessed to feel a connection to art, music, photography, literature and philosophy. My views are 100% completely independent and my own and in no way represent any official organisation's viewpoint.
Related Topics
Related Posts
Comments