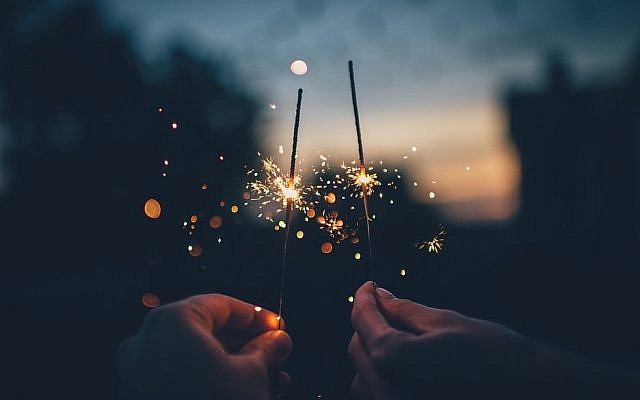 We always arrive just before sunset. The streets are blocked off by police cars, the red and blue rollers producing their own light show. People in shorts and t-shirts and flip-flops saunter down the patchwork of streets that filter into the park. Strings of party lights crisscross decks and backyards, music shifting like stations on a radio as we pass each home. People carry folding chairs out to their front yards, or to the strip of grass by the curb, bantering with their neighbors while they wait for the sun to go down.

There is already a crowd at the park, but there’s nothing to worry about, the field is wide, room enough for everyone. We choose a spot, unfold our chairs and settle in. A Sousa march drifts towards us from somewhere. By this time, the sky is deepening from aqua to Prussian blue, the air heavy and warm. Swallows and cicadas streak over our heads. Barefoot children, too excited to sit, run in circles over the grass. Kids wearing glow stick necklaces whirl toys that light up in all the colors of the rainbow.

Finally, the blue fades to black. Somewhere in the dark, we hear the pop pop pop of faraway fireworks. The towns around us have already begun. Without warning, a rocket zings overhead, leaving a trail of fizzy sparks, and just when I think it’s a dud, it bursts like an artillery shell, illuminating the sky with a shower of golden glitter.

The first fireworks I ever saw were glimpsed from the windows of my parents’ bedroom. Bang, bang, bang, BANG!! Like the loudest thunder I’d ever heard. Terrified, I ran back to my room and buried my head under my pillow. It sounded like war.

As a little girl, war was very much on my mind. My parents were Holocaust survivors from Poland. Visiting my mother’s family in Canada, the grownups talked about The War while we waited for someone to take us to an amusement park. Night after night, news stations reported on the war in Viet Nam, and in the morning, the newspaper on the table reported it some more. Posters declared that War was not healthy for children and other living things. Martin Luther King and Bobby Kennedy were assasinated. Riots broke out on the West Side, with fires consuming entire city blocks. At the Democratic National Convention, protesters clashed with police. A couple of years later came the Yom Kippur War. War seemed to be the natural state of things.

Having experienced the horror and chaos of World War 2 Poland, My dad loved freedom and democracy like only someone who has been denied them can. My father and his family were rejected by the US consulate two or three times. Permission was only granted when American cousins took responsibility for them.

After Dad spent a couple of years in a Brooklyn yeshiva, my grandfather told him it was time to get a job. Dad’s dream was to become a watchmaker. He would land a new job every Monday and get fired every Friday, after telling his new boss that as an observant Jew, he couldn’t work on Saturdays. The only employer who would tolerate his Sabbath observance was a dental technician—so Dad became a dental technician. Soon after, he was drafted into the American army, where he spent two years making dentures for Uncle Sam. Talk about total immersion! Every young immigrant should serve for a year or two. It’s a superhighway to absorbing American culture.

Mom arrived ten years later, after spending a decade in a DP camp in Germany and two years in Montreal. (The State Department rejected her family’s immigration applications again and again. My grandfather was a leather craftsman, my grandmother was in business. Okay, okay, so her business was trading on the black market. You do what you gotta do.) Having been exposed to the best and the worst people can be, she had a surprisingly liberal outlook on almost everything. She befriended all kinds of people from all walks of life. She learned how to cook tuna noodle casserole, chow mein, and meat loaf, drove carpools, built snowmen, and drilled us on our multiplication tables. Though English was not her first (or second) language, she volunteered for the PTA and registered her children for swimming and ceramics, Girl Scouts and summer camps and sports teams.

Having escaped violent, repressive, murderous regimes, my parents embraced the dream that is America. They worked hard, paid taxes, bought a house, cheered on their kids at baseball and basketball games, voted in every election, knew their local alderman by name.

Though neither of my parents received so much as a sixth grade education, they saw to it that my siblings and I all graduated college. One brother is a doctor, my sister is an executive at a television network, my older brother works in the restaurant business, and I write and teach art. We are loyal and committed Americans. None of us has joined a gang, turned to crime, or is dependent on government handouts.

I don’t know exactly what I’m going for here, as the celebration of our country’s independence takes place amid talk of border walls, turning immigrants into criminals, separating children from their parents, misplacing some of those children in the system, and denying entry to desperate people who are fleeing for their lives. Maybe I just want to celebrate one immigrant family’s love for the country that took them in.

Above my head, rockets explode into violet hearts, yellow smiley faces, a bouquet of shimmering red and gold and green chrysanthemums. As if we had practiced in advance, the crowd in the park says “oooh” and “ahhh,” in unison. Sparks gush up from the horizon like a fountain made of fire. Gold streamers arc down from the heavens. Red, white and blue lights hold their spidery shapes for the space of a heartbeat, then float to earth like stardust.