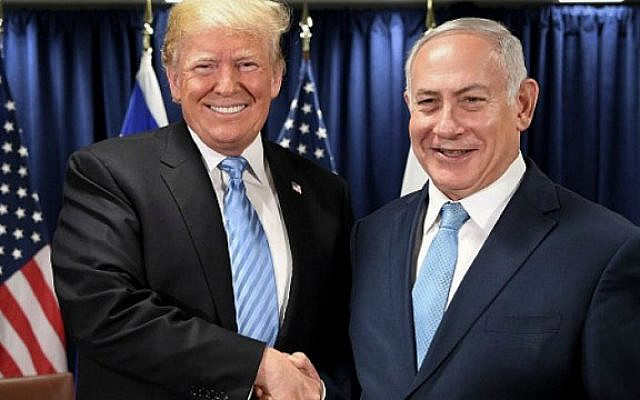 Trump and Netanyahu in Happier Days

You shall appoint magistrates and officials for your tribes, in all the settlements that the LORD your God is giving you, and they shall govern the people with due justice.

You shall not judge unfairly: you shall show no partiality; you shall not take bribes, for bribes blind the eyes of the discerning and upset the plea of the just.

Justice, justice shall you pursue, that you may thrive and occupy the land that the LORD your God is giving you.

On the face of it, the indictment of Benjamin Netanyahu, the Prime Minister of Israel, and the impeachment process against Donald Trump, the President of the USA, are all about politics. But beneath their political spins and their constant lies, we can discern a deep and abiding immorality, which is evident every day in their behavior, their rhetoric and their corrupt practices, along with the spin tactics of their colleagues and friends.

One has to wonder how all those millions of “religious” Orthodox Jews and Evangelical Christians in America and Israel support these two “leaders” who act unethically by lying, taking bribes, and obstructing justice all the time. What happened to these “Torah True” Jews and “Bible believing” Christians? How have they gone so far astray morally? Do they not recognise the consequences of supporting such “leaders” for their own societies and countries?

Do they not discern outlandish and outrageous perversions of justice when they see them, based on their study of the Bible, and their own post-Biblical traditions, both Jewish and Christian? Does violating the ethical principles of their religions mean nothing to them anymore?  Does politics and narrow self-interest simply “trump” (pun intended) religious ethics and basic human morality all the time for them?

Why are the ultra-Orthodox Jews and the right-wing nationalist Jews in Israel solidly in the Netanyahu camp even though he has been indicted for bribery and other unethical crimes? Don’t they read the same Torah that I do? And don’t they read the prophetic readings from Isaiah, Jeremiah, Hosea, Micah and others that I read in synagogue every week, readings that are replete with calls for ethical behavior of our leaders and which also contain severe warnings about the negative effects on society when leaders act corruptly and abuse their power?

And why do Christian evangelicals continue to support Donald Trump in the light of his unethical behavior in so many ways, including philandering, lying, cheating, and much more? Why don’t their preachers rail against him in their Sunday sermons? They certainly could bring many Biblical verses to denounce the most immoral president in our history, not to mention the president whose unethical speech patterns—which include cursing and slanderous inciteful name-calling of so many people—are clearly not in keeping with any serious and sensitive religious behavior and worldview?

If the prophet Isaiah were here today, this is what he would tell us courageously and honestly about our leaders in America and Israel:

Your rulers are rogues and cronies of thieves, every one avid for presents and greedy for gifts; They do not judge the case of the orphan, And the widow’s cause never reaches them.  Isaiah 1: 23

Isaiah goes on to prophesy at the end of the first chapter of the book that “rebels and sinners shall be crushed” because they forsake the Lord. I think that the so-called “religious” Jewish fundamentalists and Christian ones too know this verse and many other similar ones. They know deep down that these leaders are violating the most basic ethical principles of both the Hebrew and Christian Bibles—and the interpretive traditions that follow them—but somehow they are incomprehensively stuck in the mire of what is now called “identity politics” and basic moral values don’t seem to matter much anymore.

But the handwriting is on the wall.  Even though I am Jewish, I have some good news for you.

It is the beginning of the end for both Netanyahu and Trump. Support for Netanyahu and his endless machinations for personal survival are diminishing all the time. In America, the approval rating for Trump hovers around 41%.  His despicable inciteful and outrageous tweets cause more and more people to join the anti-Trump resistance every day.

The rule of law will prevail. The courts will rule against these corrupt “leaders”. Basic moral values will prevail.

And the peoples in America and Israel—who are rightfully getting sick and tired of immoral corrupt leaders—will have their say at the ballot boxes in due course and put an end to their corrupt rule.  There are major efforts in America and Israel to organize and recruit new voters to be part of the sane majority.

The majority of the people will eventually come to their senses and they will realise that immoral leaders corrupt not only themselves and their families but also their societies. At the end of the day, values will prevail over politics.  This gives us some hope for a better future, for us and our children and our grandchildren.