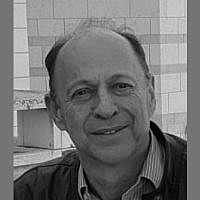 The Blogs
David Weinrich
Apply for a Blog
Advertisement
Please note that the posts on The Blogs are contributed by third parties. The opinions, facts and any media content in them are presented solely by the authors, and neither The Times of Israel nor its partners assume any responsibility for them. Please contact us in case of abuse. In case of abuse,
Report this post. 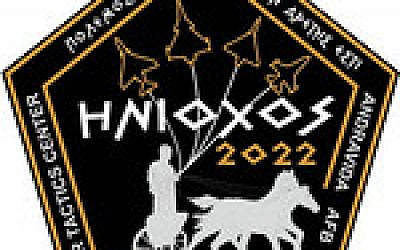 The “INIOCHOS” Exercise was first conducted in the late 1980s, as a small scale tactical level exercise, tailored to the contemporary necessity for training in combined air operations in accordance with the Hellenic Air Force doctrine. Over the next years, the success of the exercise led to the decision of establishing it as an annual event.

The exercise objective was to train personnel in planning and execution of Combined Air Operations (COMAO) in accordance with the HAF doctrine and National Plans in a realistic environment, in order to test and evaluate operational plans and tactics. 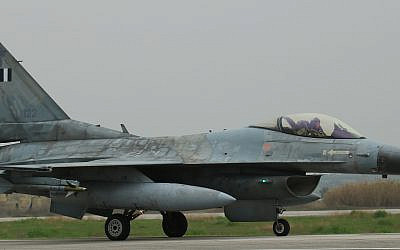 F-16C from 330 Mira Hellenic Air Force (HAF) [All photos by author]
For the execution and conduct of the Exercise, the Hellenic Fighter Weapons School (HFWS) was deployed to Larissa, so as to form the White Cell in the facilities of the National Center for Air Operations. The White Cell was responsible for the optimal coordination and planning of the operations, while participating Aircrafts were also deployed to Larissa, at 110CW, from where they launched for their missions.

In 2005, the Exercise was decentralized, thus the participating aircraft were operating from their mother bases, while the White Cell, the planning and the coordination were taking place in the Air Tactics Center and the HFWS facilities, in Andravida Air Force Base, implementing newly acquired means of Command and Control.

In November 2013, the decision was made to adopt a Single Base Concept, upgrading the exercise scale to medium and expanding the spectrum of operations with the objective to create a more realistic and demanding environment, with an intensive and prolonged 24/7 battle rhythm, significantly increasing the level of training. 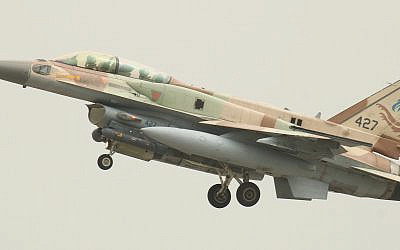 The Exercise involved a number of Air Forces both from Greece, with many of their combat units participating as well as the United States Of America (F-15E Strike Eagle – equivalent to IAF Ra’am – and a full Carrier Air Wing from CVN-75 Harry S Truman stationed in the Ionian Sea), Italy (Panavia Tornado), Israel (F-16I Sufa from both 201 & 253 squadrons & a Nachshon Eitam “SIGINT” from 122 squadron), Slovenia (PC-9 turboprop) and Cyprus (AW-139 SAR helicopter) as well as the French Navy operating Rafale fighter jets and Grumman E-2C AEW assets from the Charles de Gaulle aircraft carrier, conducting hundreds of flights, day and night, throughout the Athens FIR (Flight information region) Air Force Range, aiming to reinforce the collaboration among the participant countries in a effective, secure and meaningful way.

In addition, as has become the norm at such events (notably with our own Blue Flag Exercise) a number of countries sent observers along to see for themselves how participation in such exercises can help with the operational training of their own Air Forces – in this case Egypt, Saudi Arabia, the United Kingdom, the United Arab Emirates and Canada who were initially expected to attend, were among those considering future participation. 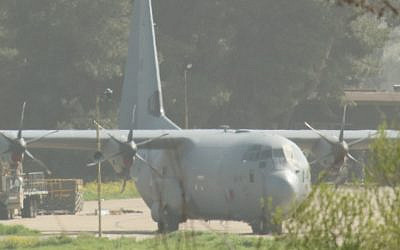 In April 2015, was redesignated as an INVITEX (Invitation Exercise), attracting participation from USAFE, Israel Defense Forces, the United Arab Emirates Air Force, and the Italian Air Force and with increasing interest for participation by other countries.

Given the capability to conduct exercises, involving a variety of weapon systems within one of the largest exercise areas in Europe, the exercise «INIOCHOS» aspires to become the most competitive exercise in the Medierranean region,  providing participants with a high level of training and unique experience of participation. 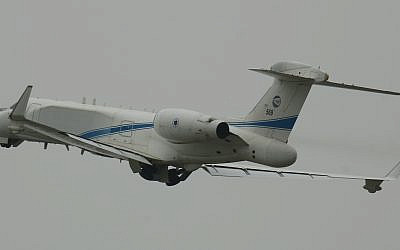 Eitam Signals/Intelligence aircraft from “The Nachshon Squadron” takes off into a Saharan Sandstorm Sky. The G550 is a far cry from 122 squadrons former mounts, DC-3 “Pere” and IAI Aravas!

In order to provide realistic training, one of the main aims of “INIOCHOS” is to create a realistic Battle Environment. This means participating personnel are exposed to an intensive battle rhythm with realistic attrition rates and challenging scenarios which include multiple modern threats and real time live injects, tailored to produce the fog of war and the friction effect (per Clausewitz), which is expected to dominate the modern battlefield and test both the physical and psychological endurance of the modern warfighter. 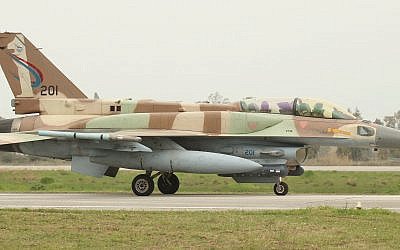 Furthermore, with the use of onboard and off board tracking data, sensors and specialized debriefing software, which is leveraged for the reconstruction of the mission by experienced HFWS instructors, accurate shot/event assessment data can be compiled and presented to the crews during the debriefing process.

The HAF is a long time customer of the Rafael Litening pod, seen here on an elderly  F-4E/AUP (modified Kurnass) aircraft from 338 MDV

In order to achieve the objectives of the Exercise, the HFWS oversees the missions from scenario planning to debriefing and makes certain that they cover the full spectrum of missions currently performed by the HAF such as: 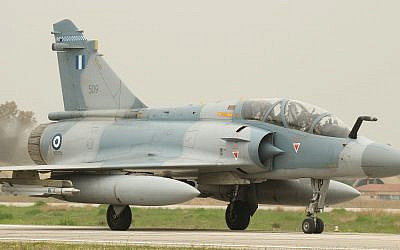 The Exercise was divided into three phases:

In addition to the Sufa and Nachshon mentioned above, Israel – who only attended the first week of the “execution” phase – sent a number of ground personnel in C-130J “Shimshon” transports as well as providing an aging Boeing 707 “Re’em” tanker/transport. A Distinguished Visitor (DV) day was held on Friday April 1st during which the now traditional massed flypast over The Acropolis and other significant sites was performed, unfortunately the IAF delegation had already returned home by that time. 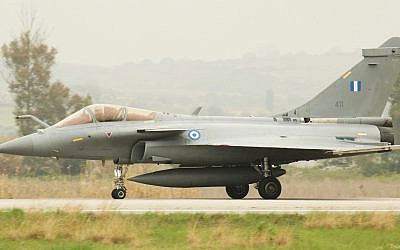 Greece is one of the latest members of the Dassault Rafale club with six “one-owner” machines already received from France. With Egypt and India among the observer nations it is hoped their Rafales will feature at INIOCHOS 23

With Saudi observers on hand and USAFE F-15E Strike Eagles participating, Iniochos provided an opportunity for those nations to practice for one very important mission. The distance from Israel to Greece is roughly equivalent to the distance from Israel to Iran. By sending the F-16I “Sufa” and G550 surveillance plane, supported by a B.707 airtanker, to Iniochos 2022, Israel gained a valuable opportunity to practice conducting long-range airstrikes that require both air refueling and coalition support. It is therefore no surprise that whilst many participants launched packets of just 4, 6 or fewer aircraft, the main IAF mission was an eight-ship of Sufas, the same force that visited Syria in 2007.

As can be seen the weather in Greece did not always play ball, in fact on at least one occasion the electronic warfare range had to shut down due poor visibility,  nevertheless the exercise was deemed a huge collaborative success. Looking forward it is hoped future “INIOCHOS” exercises will feature aircraft like the Rafale from perhaps Egypt, India and eventually Qatar, as their pilots and  ground-crews become familiar with, and operational on 4th-gen fighter jets.

About the Author
David Weinrich has dedicated his life to chasing military aircraft for fun, in Europe, the Americas, the Far East and for the past 27 years, at home in Israel. He photographs them, underlines them in his books (quill & parchment, please), escorts foreign "plane spotters" to the farthest corners of Israel and now writes a Blog about them for the Times of Israel.
Related Topics
Related Posts
Comments