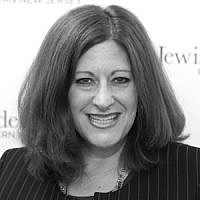 The Blogs
Lisa Harris Glass
Apply for a Blog
Please note that the posts on The Blogs are contributed by third parties. The opinions, facts and any media content in them are presented solely by the authors, and neither The Times of Israel nor its partners assume any responsibility for them. Please contact us in case of abuse. In case of abuse,
Report this post.

The only politics I post about are pro-Israel politics. The right for Israel to exist in safety and security. That’s non-negotiable.

The rest of it, well, for the sake of civility I neither post nor respond to divisive, vulgar, hostile, or just plain mean things.

I am a feminist. I believe that all people should have rights over their bodies, earn fair wages, and have equal opportunities. So it was from that framework that I recently shared a quote on Facebook that Hillary Clinton had made. She said, “I have spent my entire adult life working toward making sure women are empowered to make their own choices . . .” I then commented that no matter how you feel about her, the truth of this statement is undeniable, and we owe her a debt of gratitude.

I thought this post seemed to be benign. I was wrong. For the “HH” (Hillary Haters) could not stand that someone would compliment her. The first commenter to my post said, “Too bad 90% of people don’t trust her.” I replied, “90%? You might wish to check that statistic.” I contemplated adding a winky face to lighten my rebuke. I thought that would be that.

Wrong! I was wrong. The writer came back again with negativity. The next commenter agreed with the first. I attempted a call for civility: “Please don’t bash Hillary here. I posted this quote to create a deserved moment of admiration. No one is all good or all bad.”

Fast forward to my next post, on Saturday afternoon. My husband and I were in Boston with our son, who was about to sing at the New England Conservatory of Music with the ACDA All Eastern Junior High School Honor Choir. (Pardon my boast, but it’s a pretty big deal.) It was incredible. We kvelled at the technical skill and acuity with which the choir performed. I cried. It was beautiful.

I posted to Facebook about it, thanking my son’s wonderful teacher, Leslie Adler, for her dedication and expertise. Benign.

The first comment came from my cousin, who lives an hour from Boston. I hadn’t thought to call to say that we were coming north. That would be like calling my cousin in Margate when I was going to be in Bradley Beach. Not exactly close enough for coffee. “Wish we had known; we were in Boston today.”

I saw something cute that I wanted to post. It was a picture of Jewish candy hearts for Valentine’s Day. Phrases included “chai there,” “U R My Chosen 1,” “URa Kipah,” “Chaim Yours.” They were really cute. Benign. Or maybe not.

I found myself strategizing about the negative responses this posting might incite. Will I be chastised for promoting the eating of processed sugar? Will I be lectured about the violent origins of Valentine’s Day?

About the Author
Lisa Harris Glass is the Chief Planning Officer of the Jewish Federation of Northern New Jersey; and is a frequent lecturer to religious non-profits. She resides in Springfield, NJ.
Related Topics
Related Posts
Comments