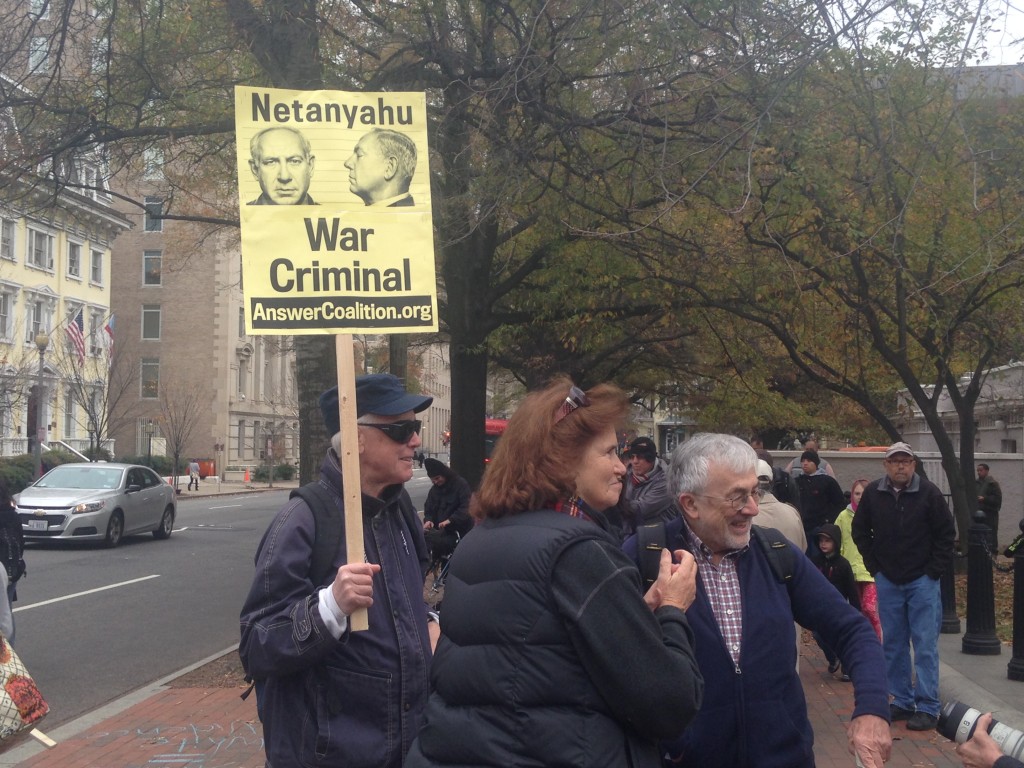 Protesters outside of The White House during Bibi’s visit on November 9, 2015.

It has been a year since the last sit down meeting between Prime Minister Benjamin Netanyahu and President Barack Obama.  But on November 9, Bibi returned to Washington and visited The White House.

The official statement of the U.S. government said that “Prime Minister Netanyahu’s visit is a demonstration of the deep and enduring bonds between the United States and Israel.”

Families’ bonds are magnetic.  They are strong.  Sometimes the magnetic poles pull the sides together.  Other times the magnetic bond pushes the other side away.  But the scientific law that relates the positive and negative charges of magnetism will never change.  That relationship will endure.

The visit is a positive demonstration of this relationship.  Following the conversation between Prime Minister Netanyahu and President Obama, Bibi called it one of the most productive conversations between them.   But on the same day as Bibi’s visit to The White House and their positive discussion to flip the charge and begin to bring our nation’s closer together, again, a small group of protesters filed outside of the gates of The White House with the intention to push us further apart.

The Answer Coalition held a “Protest War Criminal Netanyahu” rally to direct action against Bibi at 9 AM outside of The White House. They said that the Prime Minister is wanted for torture, murder, ethnic cleansing, and for racist apartheid.   They spread slander.  They wanted to end foreign aid to Israel.

No protester carried a sign calling for the arrest of Bashar al-Assad.  None called for ISIS to lay down their arms.  Not one asked Hamas to cease their terror campaign.  I didn’t see one person share a concern about the rise of executions of Iranians by Iran.  Nor did I see anyone carry a sign saying that the bombing of a commercial airline flying civilians from the Sinai to Russia is murder based on terror and political motives; or that the annexation of Crimea by Russia was illegal.

But outside of The White House, my morning cup of coffee was interrupted by calls to “end the occupation.”  Chalk was used to write “boycott Israel” on the streets and side walk leading up to The White House.  And Palestinian flags were carried and waved in front of 1600 Pennsylvania Avenue, NW. 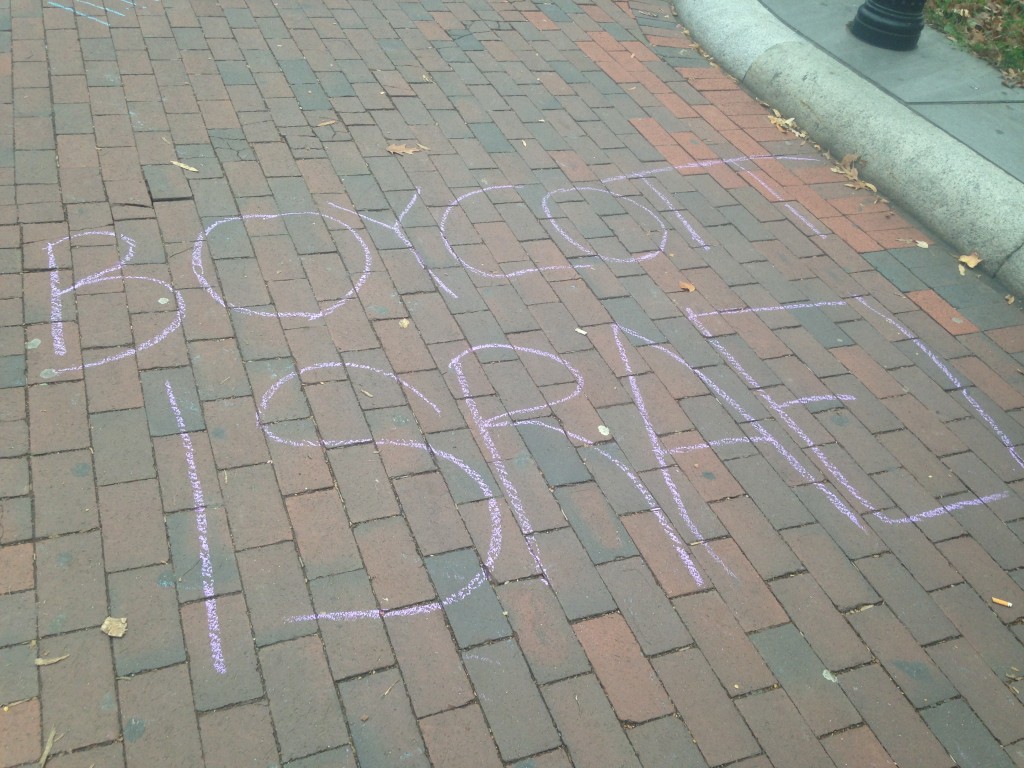 Answer is an acronym to “Act Now to Stop War and End Racism.”

Israel wants peace with her neighbors.  Israel has found and sustained peace with her neighbors – Egypt and Jordan.  Today, in The White House, the Prime Minister again expressed his desire for a two state solution.  But that peace will only come when the Palestinian leadership accepts peace and recognizes Israel’s right to exist.  Unfortunately the 30 individuals’ made no statement about the violence and war crimes committed by Palestinians and Palestinian groups against Israelis and Israel.  It was easier for them to victim blame Israel for protecting her citizens from acts of terror and to be engaged in a counter-terrorist strategy against those who incite additional violence against Israel and Israelis by lies, slander, and false truths.  Those same lies, slander, and false truths shared in today’s protest.

They choose to blame the defenders of their safety and their democratic principles, in Israel, rather than the Palestinian leadership who refuse to return to the negotiating table to find a diplomatic solution to peace.  Instead they choose to incite terror over diplomacy.

Today’s chant echoed in my ear the way that your name is heard in a crowded room.  Outside of my window were faint chants to “end the occupation.”  Later on a 10’ Palestinian flag was walked down the street by a handful of protesters.  And for whatever reason two people also carried Turkish flags. 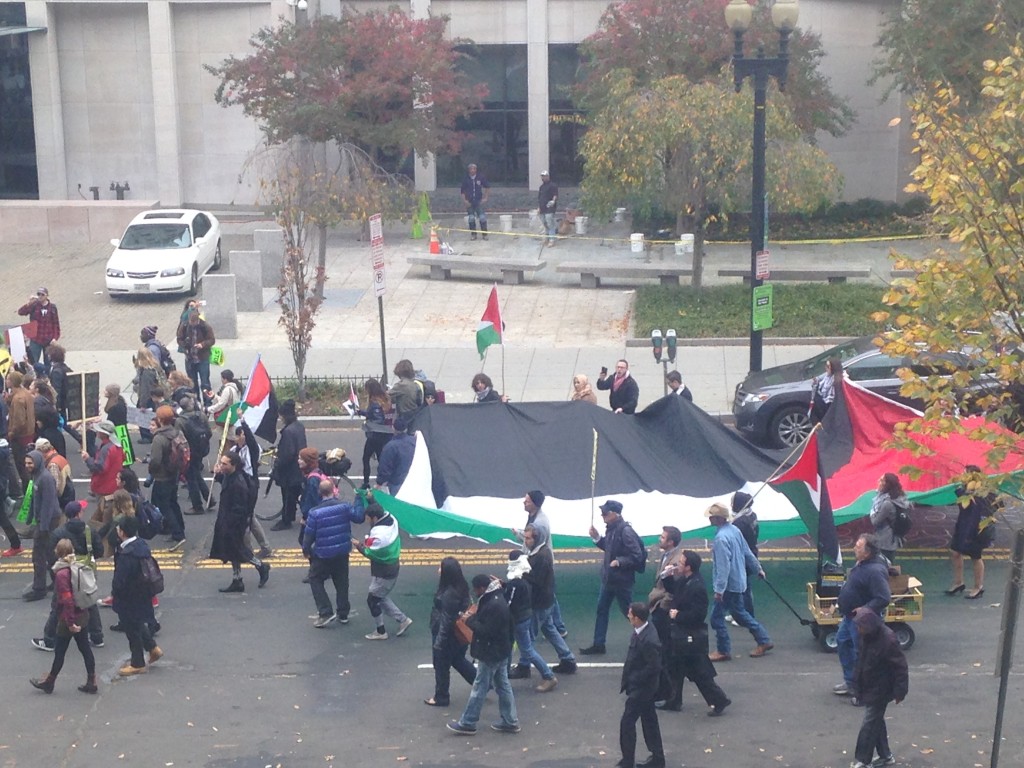 So today we saw a productive conversation between two world leaders who don’t always see eye to eye on policy, but respect their partnership and their shared values/goals.  And then we saw outside of The White House people who would rather shout down ideas than debate them. 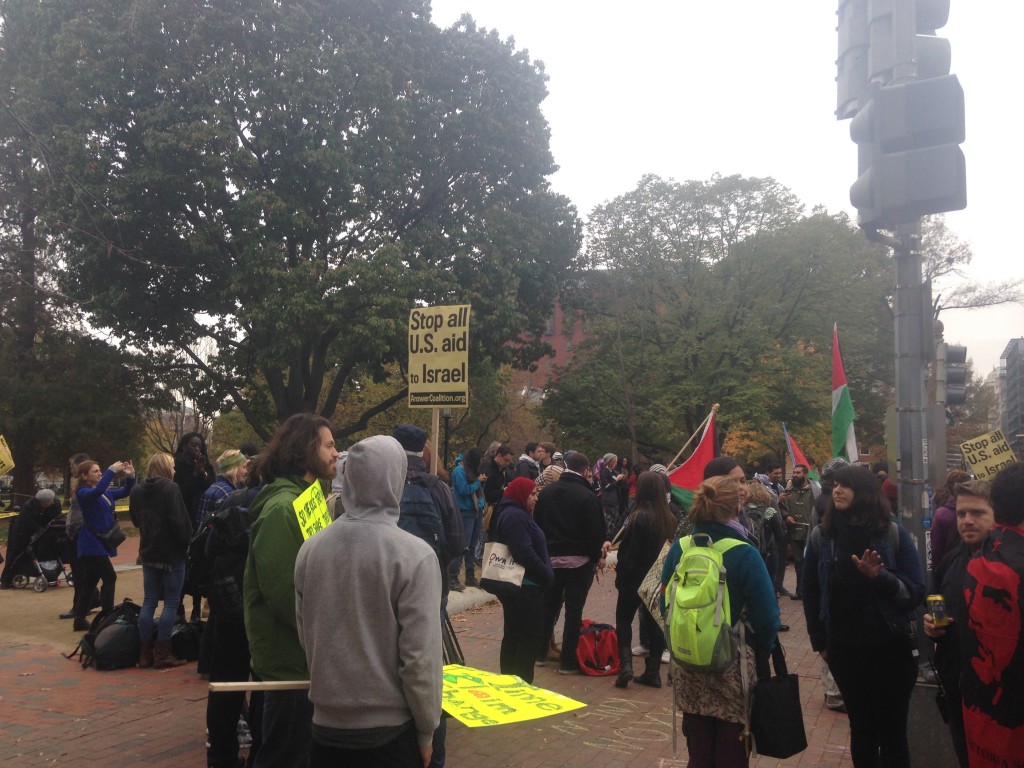 White House protesters calling to stop all U.S. aid to Israel.
About the Author
Jason Langsner is an active member of the American young Jewish professional community. He is a published author about Israel and American-Israeli affairs and regularly blogs and speaks at conferences about the intersection of communication, culture, politics, and technology. He formerly ran the digital strategy for B'nai B'rith International, the Global Voice of the Jewish Community, and currently serves as a lay leader with various pro-Israel nonprofits. Mr. Langsner received a Masters at Georgetown University and studied International Business Management at the University of Oxford.
Related Topics
Related Posts
Comments