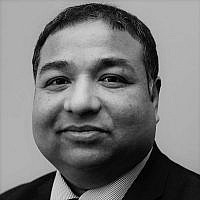 The Blogs
Dilwar Hussain
Apply for a Blog
Please note that the posts on The Blogs are contributed by third parties. The opinions, facts and any media content in them are presented solely by the authors, and neither The Times of Israel nor its partners assume any responsibility for them. Please contact us in case of abuse. In case of abuse,
Report this post.

I have had the immense honour of being at Limmud a number of times over the last 12 years and have presented a variety of sessions as well a learn from others. It is inspiration embodied in an event! And I want to pay tribute to Limmud for inspiring us.

From the very first time that I attended Limmud, I thought to myself, “I wonder if this can be done with Muslims?” A couple of years ago, I wrote in the Jewish Quarterly, “A ‘Muslim Limmud’ – when it comes into being, rather than if – would probably take inspiration from the original but not produce a carbon copy.” And over the last two years, we at New Horizons in British Islam have been hard at work doing precisely that – crafting and organising the ‘British Islam Conference’. Now in its second year the event is fast becoming recognised as one of the most diverse, vibrant and creative event of this nature organised in the British Muslim civic space. Last year we had 20 speakers and about 100 participants in all. This year, we have over 50 speakers and over 200 participants.

We have received very positive feedback and a strong assertion of the need for such an event and are confident that it will grow year on year. New Horizons is a forward-looking organisation that engages in critical discussions around Muslim identity, tradition and reform to provide a positive, contextual vision of what it means to be Muslim today.

Our work aims to raise awareness of the breadth of Muslim tradition and the need for contextually rooted interpretations of Islam; we want to promote good relations and support voices that seek to find common ground in the midst of social divisions.

Sadly, in the climate post-Brexit, in the Trump era, social divides seem to be on the increase. We hear a lot about ‘us and them’. We often hear about discrimination and prejudice. But we cannot be defined by a sense of victimhood, what we are against; we need to construct an argument for what we are for. We need to develop powerful (and positive) narratives of what an integrated, harmonious future looks like.

The future presents a critical challenge for society, but it also asks questions of Muslim Britons – we need a vision of what an indigenous Islam looks and feels like in the West, just as we know what a Turkish, African or Indian Islam feels like, distinct from its Arab roots. We need more spaces where those who wish to stand up for open, tolerant, inclusive visions of Islam and resist the discourse of closed, rigid and narrow interpretations can come together and exchange ideas, develop partnerships and strengthen networks.

The British Islam Conference helps to create a ‘marketplace of ideas’. It is about using all avenues possible, including art and culture, to enhance the exploration of a living Muslim identity. And it does this while bringing together a diverse audience including rabbis, vicars, imams, religious Muslim activists, secular Muslims, academics, humanists, LGBT activists and others to confront and debate hard-hitting themes, however controversial.

The notion of a ‘community of learning’ that wants to expand its own horizons is a profound one; it is what Limmud embodies so well and it is what British Muslim communities have now been inspired to do.

About the Author
Dilwar is Chair of New Horizons in British Islam, a charity that works on Muslim identity, integration and reform; and Research Fellow at the Centre for Trust, Peace and Social Relations, Coventry University.
Related Topics
Related Posts
Comments