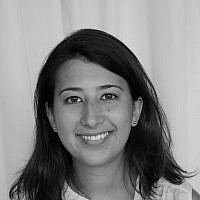 The Blogs
Meggie Fredman
Apply for a Blog
Please note that the posts on The Blogs are contributed by third parties. The opinions, facts and any media content in them are presented solely by the authors, and neither The Times of Israel nor its partners assume any responsibility for them. Please contact us in case of abuse. In case of abuse,
Report this post.

Over the last two weeks, young American Jews have awakened to the realities of antisemitism in the United States. We are in the midst of a well-documented spike in the frequency and severity of antisemitic incidents across the country, exacerbated by some Americans’ response to the recent conflict between Israel and Hamas. Huge numbers of young Jews, spanning from Gen Z to millennials and Jewish influencers, many of whom previously shied away from commenting on antisemitism, are taking to social media to call out this alarming rise. The response culminated in a viral campaign last week, modeled after last summer’s #blackouttuesday, in which users posted blue squares on social media to call attention to the surge of antisemitism.

The past year has been an inspiring time to be a young American and to be a progressive. The mainstream has become sensitized as never before to anti-Blackness, transphobia, and anti-Asian hate. We have learned to inspect our own biases and assumptions. Now, Jews are asking for our non-Jewish allies to do the same: to stand with us, to ask questions, and to amplify Jewish voices. And many Jews are reviewing their own activist toolbox, trying to determine how and why we speak out.

As American Jewish Committee’s Deputy Director of Young Leadership and a young Jewish woman who is active in many progressive spaces, I’ve found myself conflicted. I admire the number of young Jews who are posting and speaking up about antisemitism. It’s been refreshing given that the fight against antisemitism is often a lonely one. However, many of my Jewish peers choose to stay quiet, fearing that raising the issue will seem “too controversial” or “too Jewish.”

Others are not prepared to effectively engage. I have been inundated with messages from extremely bright friends and peers from across the political spectrum, asking how to respond to a given antisemitic tweet, post, or comment on their respective feeds. These are not uninformed individuals. My friends, young Jews who work at startups, law firms, in medicine, tech, and education, who have undergraduate and graduate degrees from prestigious universities feel woefully ill-equipped to address antisemitism, and that’s just on social media.

So, how do we fight antisemitism? Let me tell you now, your well-written Instagram post alone won’t do it. What will make a change is pairing your post with action. Addressing antisemitism involves community engagement, education, and a commitment to speak up beyond Instagram and beyond the performative activism of this moment. Yes, antisemitism is committed by non-Jews, but amplifying its horrific existence and manifestations, and enlisting allies to fight it must be the role of each and every young Jew.

Here are four steps that all young Jews should take to combat growing antisemitism here in the U.S.:

The best way to combat antisemitism is dedicating yourself to it every day, even when the spotlight isn’t on the issue, and even when it’s not having a viral moment. As young Jews, we owe it to our future.