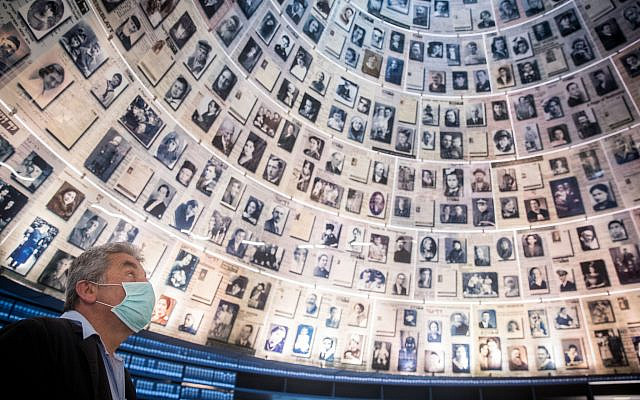 Yad Vashem Security guard stands at the empty Hall of Names in the Yad Vashem Holocaust Memorial Museum in Jerusalem on April 19, 2020. In order to prevent the spread of the coronavirus disease, the Yad Vashem Museum will remain close this year on Holocaust Remembrance Day, but will switch its main activities on their website and social media. Photo by Yonatan Sindel/Flash90 *** Local Caption *** יום השואה שואה יד ושם היכל השמות קורונה וירוס ריק הולך מאבטח

As I write these words, Israel and many nations around the world are locked down, daily deaths from COVID-19 in the richest nation in the world surpass those on 9/11 and the FBI is warning that there may be armed attacks on every State Capitol in the US on Inauguration Day.

Congressman Andy Kim of New Jersey was so disturbed by the storming of the US Capitol that before leaving the Rotunda he grabbed a trash bag and got down on his knees to pick up the trash the rioters left behind. When he was asked why he did that, he told CNN’s Don Lemon: “My heart broke … This is the building where my mom and my dad – my immigrant parents – brought me when I was a kid to show my respect to the country … I came back home Friday and talked to my kids. Do you know hard it is to talk to a 3-year old and a 5-year old about this? They had heard — I don’t even know how they heard about this — they were just fearful for me.”

As if this were not bad enough, Jewish educators and children of Holocaust survivors have been asking each other since December: What books should you read preschool children for International Holocaust Remembrance Day (January 27)? What and how did you tell your kids about the Holocaust when they were that age? My short answer: We didn’t and you shouldn’t. Maybe not ever. Certainly not this year.

This is not the year to tell young children huddled in homes with anxious parents fearing a virus that has taken the lives of millions that human monsters took the lives of 6 million Jews in Europe alone.

This is not the year to tell kindergarteners that human monsters smashed the windows of Jewish homes, hospitals and schools on Kristallnacht, filling the streets with shards of shattered glass. How the hell are you going to tell them that you can protect them from the monsters that rattle their windows and hide under their beds and haunt their dreams — when you can’t even tell them that monsters wearing Camp Auschwitz T-shirts and wild things with pelts and horns can’t really break into America’s Temple of Democracy?

Tell your kids this year about their ancestor’s lives in Europe BEFORE the Holocaust: the languages they spoke, the shuls they attended, and what the journey to British Mandate Palestine or the Goldene Medina was like. They have time to learn why they boarded the ships and how they were received when they got there.

When they’re a little older, tell them that Emilia Rotter and her partner Laszlo Sollas won the World Figure Skating Championship four times in five years. That Siegfried Marcus invented the car. And that very few believed that nuclear fission could even happen until Lise Meitner explained how. They have time to learn what happened to Emilia and Siegried and Lise AFTER.

Tell your youngest children on another day that BEFORE COVID-19 we held their salty bodies on our laps at the beach without a mask. That airports were full of unmasked children traveling to their grandparents’ homes for Christmas and streets were full of unmasked children carrying trays loaded with sweets to their grandparents’ homes on Ramadan. That your mom and your dad took you to the Capitol when you were a kid and that perhaps you could take them not too long from now.

I was over 40 when I learned that my mom’s life did not begin with black-and-white scenes of ghettos and boxcars and concentration camps. She was sitting alone at our enormous dining table on the morning before Pesach gazing sadly at the riot of colors in my country garden. Suddenly she said, “When I was a little girl, we took the train every Spring to land that once belonged to my father’s family. We’d look for the trees with the most blossoms because they would have the most plums. Then my father rented the two trees we chose to pick in the summer.”

My husband with a journalist’s nose for a story grabbed his yellow legal pad and began to ask questions. My mother told him that dozens of children schemed under my great-grandmother’s Friday-night table and ran amok in her yard. That my grandmother had 9 siblings and that they had children too. That my grandmother traded a chunk of moldy bread for a half-cup of flour and a small beet to make ‘matzo’ and ‘wine’ for her ‘Seder’ in the Lodz Ghetto. My mother’s eyes were trained on my husband for more than two hours as I sat beside her.

It was painfully obvious why it was so much harder for her to describe how her siblings squealed when they spied the first fairy pink blossoms out a train window — just like my brother and I when we spotted the first dirty white patches of snow on our annual drive from San Francisco to the Sierras. Much harder than reciting the day-to-day account of her life in the Holocaust that followed. It was also painfully obvious that we would someday have to tell our children what happened to their grandparents AFTER.

But now it was enough to tell them about what happened BEFORE: That a favorite Auntie Pesia in a flaming red wig had a little dog that all the children loved, that she preferred pants to dresses and had children of her own. That their great-grandmother lifted layers of silk petticoats to access a little purse from which she gave only the grandchild who agreed to attend religious schools a coin. That there were umpteen cousins dressed in Shabbos best surrounded by T-strap pumps and wingtips under a table that contained them all. And that none of the other children could be bribed.

That their grandfather — a little boy named Yossele — nearly drowned in a vat of slivovitz that the Spiegels made from their plums in Czechoslovakia. That he crouched beside the Uzh River, tapped one rock on another and scooped the stunned little fish that swam underneath into his pockets. That Great-Uncle David made Savta Rivka wooden ices skates with leather straps and that – like their mother – she could skate like the wind.