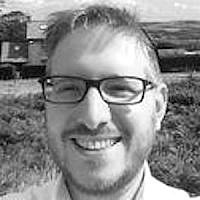 The Blogs
Benjy Rickman
Everyone can be inspired
Apply for a Blog
Advertisement
Please note that the posts on The Blogs are contributed by third parties. The opinions, facts and any media content in them are presented solely by the authors, and neither The Times of Israel nor its partners assume any responsibility for them. Please contact us in case of abuse. In case of abuse,
Report this post.

Several years ago, I was invited to join my first interfaith panel. It was very pleasant with each delegate taking care to say the right thing. I am sure the organisers felt proud. In reality, the event was nothing more than sweet words: shalom, salaam, namaste, peace. Bringing people together is noble; it might even inspire others to do the same. But how do we create an altogether different narrative that will ultimately make such events unnecessary?

In the aftermath of the Charlie Hebdo and the Jewish supermarket attack, I was contacted by BBC Breakfast TV. They desperately wanted to create a different narrative than that of hatred, suspicion and division. They knew that I had brought together Jewish and Muslim students and were keen to show that image to their viewers.

The film footage of the event was shown the following week. During the session, my friend Jamilla Kossar, from the Muslim girls school, and I pushed students to deal with stereotypes and prejudices. It’s overly simplistic to draw parallel lines between two communities, two faiths; it is significantly more worthwhile to erase the lines of hatred and ignorance.

The young teenagers happily complied and soon we had the very worst slurs being discussed openly. As educators, we explained the origins of each idea, and within a short time, the girls understood that neither behaviour is a true expression of either culture or religion. The final edited piece that was shown on TV reflected the sincere feelings that both groups had for each other by the end of the morning.

There is a fear of reaching out. It is easy to get lost in the narrative of the Middle East and assume that we cannot talk or become friends. I would argue that it is legitimate to leave some topics off the table. If we become obsessed with every issue we will never speak. However, if we look at local issues it becomes much easier to begin a conversation which then creates a shared narrative.

With that in mind, in 2014, a group of Catholic, Jewish, and Muslim students stood in a local supermarket to raise money for a children’s hospital. We raised more than £700 in a few hours. The shock value contributed. The idea that all the children of Abraham could stand together inspired so many to give. We rewrote the accepted narrative that day. Our unity forced people to reassess how they understand the three communities.

At times, reaching out is easier than reaching in. Internal struggles within each community contribute to the problems that each community faces. If we fail to make peace within, how do we expect to make it with those outside of our immediate family? Faith leaders in every community need to work to heal the internal rifts. If we deny co-religionists God’s love, it becomes almost impossible to preach that love for others. Religious narratives need to change — you don’t need to share my religion in order to share my humanity.

There is a beautiful poem written in Farsi that adorns the gates of the United Nations building. “Bani Adam” ought to be studied and memorised:

The sons of Adam are limbs of each other,
Having been created of one essence.
When the calamity of time affects one limb
The other limbs cannot remain at rest.
If you have no sympathy for the troubles of others,
You are unworthy to be called by the name of a Human.

Stories are how every community communicates its’ values. We need desperately to write new stories that tell of a shared humanity, where we are all limbs of one giant being. With limbs working together in harmony without jealousy or contempt for each other.

Islamaphobia and anti-Semitism are symptoms of a bigger problem. Jews and Muslims are talking, but we are not the only ones that need to talk. Weak members of society are easy targets for hatred and bigotry. British society needs to begin a new conversation with itself and write a new chapter in the story that is Britain. When we see others as less than human, we deny them the right to life. If we are to create a world worth living in, we must rewrite the story. The past is “history”; the present can be “our-story.” By creating our own stories, we learn to take the texts of our lives as seriously as we do ‘official’ narratives. It’s easy to complain, but the challenge is what world we want to live in.

About the Author
Benjy Rickman is an experienced educator and religious broadcaster. Currently he is Head of Religious Studies at King David High School in Manchester, assistant Rabbi and Baal Tefila at Holy Law Shul and Director of Think Tuition Manchester. Benjy launched an interfaith portfolio opening lines of communication between Abrahamic faith schools. He was praised by OFTSED School inspectors for his lead role in incorporating the teaching of British Values within a religious framework. He is an exceptional communicator of ideas. He is an expert educator and educational consultant.
Related Topics
Related Posts
Comments