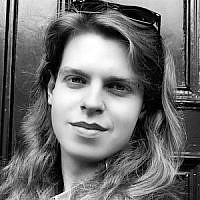 The Blogs
Robbie Travers
Apply for a Blog
Please note that the posts on The Blogs are contributed by third parties. The opinions, facts and any media content in them are presented solely by the authors, and neither The Times of Israel nor its partners assume any responsibility for them. Please contact us in case of abuse. In case of abuse,
Report this post.

Intersectionality, when initially considered, seems like a positive concept. It is purported to have been created to highlight that certain minority or disadvantaged groups will face differing challenges, something most rational individuals will be able to agree with, and that individuals who come from more than one of those groups may face more challenges than an individual from one.

What a pity that many of those who extol the principles of intersectional politics use it to promote prejudice against groups which they believe to hold power, or nefariously they assert to have power, and that it is increasingly used to silence those who disagree.

First, to understand where this strategy has come from, look toward classical anti-Semitism, from Zio-Masonic theory to other forms of malignant prejudice exhibited against Jews, much of it alleges that Jews both control massive amounts of political influence and financial clout. Essentially, the tactic is to declare the Jew as powerful and to declare those who are not powerful as disposed of power by the Jews. This politics is wildly irresponsible, but for its promulgators, it offers a tangible gain.

In attacking a group of people and declaring them powerful, it gives individuals using this tactic, an ability to declare themselves victims of that group. They can manufacture and fabricate a series of grievances.

To say that Jews control funds is to say that they stole them from you. To make Jews powerful is to make them the cause of all your problems. Giving individuals an omnipresent force which is the cause of all their problems means that it also shapes discussion towards constantly arriving at the same conclusion: the Jews did it. Every problems individuals face reinforces the hatred, it allows the hatred to crystallise.

Hence, the solution to what these demagogues allege the problem is, Judaism, becomes blatantly and painfully realised.

But Intersectionality has become toxic in that it can be applied to silence those from groups who are seen to be a challenge or oppose the ultimate goals of intersectionality. Many of its proponents are hypocritical, and often use that form of politics to silence others. Take Linda Sarsour, an influential member of the women’s movement, trying to slither her way into seeming like a decent individual by feigning concern about Jewish cemeteries. She says:

It just doesn’t make any sense for someone to say, ‘Is there room for people who support the state of Israel and do not criticize it in the movement?’ There can’t be in feminism. You either stand up for the rights of all women, including Palestinians, or none. There’s just no way around it.”

Could it be that despite seeming mildly sensible initially, this is what intersectionality is truly designed to do: divide those who would stand for women’s rights, and suggest that they must puritanically support a certain political belief? This sort of politics is designed to isolate those who do not agree with a certain form of politics by declaring them heretical.

Supporting the existence of Israel becomes anti-feminist. This hateful interpretation of ideology is purely created to shame those would disagree into silence.

It is also clever because often people deploy the tactic that Sarsour did: because a group of women are disadvantaged, though not through the Israeli State’s deliberate or even subliminal misogyny, supporting Israel becomes anti-feminist. This to any logical observer becomes a laughable assertion, especially suggesting that one cannot support Israel and support it’s rights toward women. But this also simplifies feminism, and serves to divide the movement, it sets Zionist feminist against anti-Zionist feminist. Ultimately, this battle suits the regressive elements of society. Perhaps it could be said this is why the intersectionalists are the useful idiots of the anti-semites and regressives. Weakening the case for equality.

Feminism should be about ensuring and protecting rights for women. The Israeli Declaration of Independence states that “The State of Israel (…) will ensure complete equality of social and political rights to all its inhabitants irrespective of religion, race or sex.” Israel was the third country in the world to have a woman leader, Golda Meir. Israel has one of the highest percentage of representation of women in Parliament in the MENA, at 26.7%.

But is suits those who propose intersectionality to suggest Zionism is a belief devoid of nuance to, because then it means that those who support Zionism. It suits those who wish to attack Zionism to set it against minority groups. Minorities are politically active and so are their supporters, and to set them against a movement is to weaken that movement. Those who dare disagree that the forbidden certain political belief is compatible with a wider overall political stance find themselves ostracised as heretics.

Intersectionality hence declares them traitors to the cause.

Such language is effective and potent, in the short term, it blackens the name of those in he movement who would dare challenge the pre-established orthodoxies, but in the long term, it creates a culture of silence, in which people are scared to take anything other than a harsh stance. This inevitably leads to movements like feminism becoming increasingly extreme, and hence, something people would progressively struggle to identify with.

If Zionist movements are to grow in strength and appeal, they must be able to speak to rational individuals and minorities. We must able to promote Zionism without rejecting a sensible dialogue as to Israel’s flaws, or denying that other prejudices exist.

Zionism must continue to modernise, if it is to reach the modern, intersectional generation.

About the Author
Robbie Travers is an independent political consultant, a political commentator at the Gatestone Institute, former Communications staff at the Human Security Centre, an LGBT pro-Israel advocate and law student at the University of Edinburgh. He has written for the UK Telegraph, Clarion Project and Left Foot Forward and been featured on BBC news.
Related Topics
Related Posts
Comments