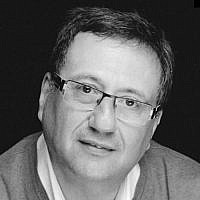 The Blogs
Peter Biro
Apply for a Blog
Advertisement
Please note that the posts on The Blogs are contributed by third parties. The opinions, facts and any media content in them are presented solely by the authors, and neither The Times of Israel nor its partners assume any responsibility for them. Please contact us in case of abuse. In case of abuse,
Report this post.

Directly on the door handle to the parking garage under the opera house, I unexpectedly met Virginia Crown, a female coronavirus who was just about to ambush an unprotected opera visitor. Careful as I am, I wore gloves when I opened the door. Then I noticed how the little virus lady hopped on my right thumb. As soon as she noticed the impenetrable cover around my fingers, she looked up at me and asked indignantly, “Well, wouldn’t you want to touch your nose sometime, you coward? Isn’t it itching?”

“Don’t talk to me like that”, I replied somewhat amused. “I know what you want. Now do not be disappointed and keep calm, even if I do not let you infect me”.

“Then at least smear me back on the door handle,” she said reproachfully, “You should know that I can’t move on my own, except in some heartily sprayed saliva by a loud sneeze”.

I agreed on one condition. “If you let me interview you over a cup of coffee, I will drop you off at the opera again”.

“Agreed. But only for ten minutes, otherwise I will deteriorate to death on this inhospitable rubber. So let’s get started!”

We sat down at a somewhat secluded table and I began a conversation with the tiny one on my thumb. Cautiously, I held her at a reasonable distance from my face so that we could talk as inconspicuously as possible. I operated the cup, sugar and coffee spoon with my left hand, and pushed the peanut bowl further away in disgust. Every time the waiter came up to me and senselessly asked if everything was okay, I paused so as not to be mistaken as mad or cranky. Then I hurried to satisfy my curiosity and held the following improvised conversation:

Me: If I may introduce myself, my name is Jeremy F. Mangold, freelance science journalist and enthusiastic slime-mold collector. I am responsible for the monthly “Frank Confessions” column in “Wild Nature and Art of Living”, a colorfully illustrated glossy magazine for upscale readers from the well-to-do, green-liberal eco-milieu. For example high school teachers and such. This is where our dialog will appear in print. With your kind permission, of course.

VC:  Okay, but without my name being mentioned. You can use my initials. I don’t want to be a whistleblower among my peers.

VC:  I have two variants, one short and one long. The short version is that an opera enthusiast recently expectorated me onto the doorknob. It happened after I left my family in his somewhat attacked lungs and found myself ready to leave with his sputum, ready to embark on a short haul flight.

Me: And your long version? I have plenty of time.

VC:  Ok, then I have to go back a little. Our career as a certified pandemists started very far from here. More specifically in Xin Zhou, a suburb of Wuhan in central China. My venerable ancestors – I speak from twelve hundred previous generations – populated a clan of bats in the nearby Huang Shan Cave, where we lived in harmony with our hospitable hosts. It’s been like this for many, many generations, I don’t know for how long. Sometimes there were more bats, sometimes fewer, in any case we were all doing pretty well. Those cute fluttering animals suffered occasionally from some mild feverish hanging around from the cave ceiling. Just for a few nights at worst, and we viruses thrived splendidly in the midst of that warmhearted colony.

Me: And then? Then something drastic must have happened. Right?

VC:  Exactly. Everything was fine until September last year, when the head chef of the distinguished Wau Yum Yum restaurant messed up a carefully marinated poodle entrecote with far too much glutamate. Under immense pressure of time – the gourmets were waiting impatiently for the main course – he ordered a load of “small animal meat of any kind to come immediately“ from the nearby specialty butcher. In the hop-packed fresh meat package was a pekingian, two dachshunds and a skinned bat.  It was in the latter where my unsuspecting ancestors spent their well-deserved company vacation: including my revered great-great-(actually 68 times great)-grandfather Cornelius and my equally rustic grandmother Cornelia Crown, born Feverish. They escaped just in time by making a bold jump in a tiny drop of blood, shortly before they would have landed in the hot wok with the dangerously hissing palm oil. They found shelter in the corner of the eye of a rather clumsy auxiliary cook by the name Shin Lei, where they had to adapt quickly to the unusual conditions.

Me: So exciting! Can that be true?

VC:  Oh yes, definitely! Great virus word of honor. Due to the less than ideal conditions in Lei’s tear fluid, they mutated into a precursor of us, the recent corona virus strain. Did they have a choice, if I may ask? Certainly, they would have preferred to stay with the bats, but that’s how evolution goes, as Mr. Darwin says: adapt or perish! The next ten generations of Crowns then changed continuously during the first hour. This allowed them to gradually adapt to the human immune system.

Me: And Shin Lei then got seriously ill?

VC:  Ah come on! The young fool had almost no complaints, maybe a little cough. But he distributed the Crown descendants to all of his colleagues and, via the cutlery, to some guests too. It went on like this until the whole city was hit by a real epidemic. The rest you know from the media.

Me: And how did you get here? In the parking garage under the opera?

VC:  Very simple. My grandparents flew very comfortably from Shanghai to Milan; their host, an Italian businessman for bamboo socks, was sitting in the business class, while grandpa and grandma were lounging on his right sleeve, which he occasional used to wipe of his nose. The rest of the story is a hasty European sightseeing tour of the rapidly multiplying family. Right after I was born a quarter of an hour ago, my host coughed me directly on the doorknob. I was happy to get out of him because he already showed signs of a severe pneumonia. As an older gentleman, he could have taken us all with him to the grave.  Unfortunately, I had left behind almost twenty millions of my siblings. And now I’m very worried about their fate. Family comes first, you know?

Me: Yes, of course, but why do you have to be mortal right away? It’s counterproductive, isn’t it?

VC:  That’s true. If one of ours is too wild and unfortunately kills his host, we consider this a “work accident”. But that’s how evolution works: over time, the rabid exaggerators are removed from the gene pool and more tolerable offspring remain. These are the ones who can come to terms with the hosts and become “endemic”. That’s exactly what I want for my descendants: to become endemic, preferably in the music business.

Me: I’m really impressed by your wisdom. What plans do you have for the future?

VC:  As a lover of Italian operas, you know, Verdi, Donizetti and such, I would like to stay in this environment. I would prefer to infect a member of the orchestra, for example a brass player. Or the prompter. In them I would live through many beautiful hours of slightly feverish musical pleasures. And of course I want to start a family in the next few minutes. Can you imagine anything more beautiful than listening to the sound of “Una furtiva lagrima” while watching my ten thousands of children happily replicating in the cytoplasm of a lung cell?

Me: Hardly, I have to admit that.

VC:  Then please take me back to the opera.

Me: With pleasure. I’m gonna leave you on the railing to the main entrance. And thank you for the interesting conversation.

VC:  It was a pleasure. Goodbye! And as we progressives say: Long live the evolution!

About the Author
As a single child of Shoa survivors, he emigrated from socialist Romania to Germany in 1970. Two decades later he moved to Switzerland, where he works as a Senior Physician and Professor of Anesthesiology. Occasionally he writes satirical short stories in German literature magazines and in Romaninan for the Transylvanian online journal Baabel.ro
Related Topics
Related Posts
Peter Biro
Comments