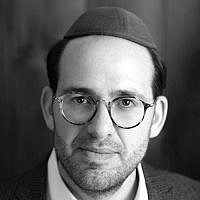 The Blogs
Menachem Poznanski
Apply for a Blog
Advertisement
Please note that the posts on The Blogs are contributed by third parties. The opinions, facts and any media content in them are presented solely by the authors, and neither The Times of Israel nor its partners assume any responsibility for them. Please contact us in case of abuse. In case of abuse,
Report this post.

The final component of this spiritual approach to addressing unwanted habits is prayer. Prayer in its most useful context (aside from organized ritual divine service practiced as part of a religious obligation) is manifest in two ways. First; personal prayer, speaking to G-d in our own words. Second, the recital of specific prayers that religious tradition tells us, bring about spiritual healing. In recent times, there has been much discussion about the value and power of personal prayer in addressing spiritual conflicts. This use of prayer is critical to a spiritual lifestyle and to any method of recovery. Yet, it is also specifically important to discuss a shift in our attitude about the other forms of mystically powered prayers and rituals [1] that are utilized as tools to help overcome unwanted habits and behaviors.

Developing a more permanent solution to unwanted behaviors is often enhanced, and perhaps even made possible by utilizing these sorts of spiritual tools from a new vantage point. These rituals have a certain suprarational and electric power to heal our spirits and souls.

It is important to acknowledge that all of the techniques we discussed untill now have grounding in the teachings of Torah, particularly the inner world of Torah, but ultimately are rooted in a psychological outlook on problem solving, as well as in rational common sense thinking. The  discussion in this article is admittedly not that. We are discussing sources of power that are fully outside the frame of deduction [2]. It would be easy to skip this article and not discuss them at all, yet that would entail a lack of truth on my part, as I have observed their usefulness and believe in their ability to help those who engage them to tap into a source of power outside of themselves. This isn’t meant as an apology for discussing these, but rather a simple qualification. I hope the reader receives this and these ideas as it is intended, with a desire for humble authenticity to the truth of what I have observed works.

The basic premise here is not very complicated, especially considering all the introductions in previous articles. Yet, the subtle shift in paradigm is critical. The basic premise is that instead of utilizing these tools in a way that is focused on cleansing and purifying ourselves from past misbehavior, we direct our attention and motive to the how these methods can thrust spiritual power into our lives for the future. Having emerged out of the crucible of repetitive virtue seeking and compulsive and obsessive shame, into the productive universe of balanced and honest regret, seeing something as a “fix for the past” doesn’t really mix well. So, instead lets orient our perspective to drawing in spiritual or mystical power primarily for benefits of the future. To visualize these prayers and actions as a powerful tool that can catapult us into a new way of living, by healing our broken spirits. In this context both the regret of mirror time and these sorts of prayers are not methods of scrubbing our souls of filth, but rather tools to heal our bruised and battered souls, and infuse our spirits with energy to face the future that is to come. The shift is subtle but separates worlds.

Setting aside time for a daily practice of these sorts of prayers, in addition to personal and ritual prayer provides real results. As a person develops such a daily practice their fluency with passages, and or the meaningfulness of them evolves. Within a relatively short time these sorts of practices shift from being a city of refuge from the pangs of overwhelming shame, to an oasis and rejuvenating retreat for our spirits.

Epilogue: The perspectives behind the method I have suggested emerged out of three areas of study. First the trial and error of experience, both personal and in my work with others over twenty years treating addictions and serving the recovery community. Second, attending masters level study in social work, continuing education courses, reading articles and research, watching and listening to video and audio material, all discussing addictions and recovery. Finally the sixth “Torah” of Likutei Moharan, the primary text of the Chassidic master Rebbe Nachman of Breslov.

The truth of it is, it took me some time to even realize the extent of the influence Rebbe Nachman had on my thinking in this area. While I feel certain connection to Rebbe Nachman and his teachings the primary influences on my thinking are in other schools of thought. Yet, after I concluded to record this method and began to organize it in writing, it suddenly dawned on me how much of it Rebbe Nachman had been saying the whole time. In fact, as I looked back at the time when I first began to formulate this method, I was actually immersed deeply in this teaching. Though I didn’t realize it at the time, I have no doubt that the messages of the teaching guided me to this simple plan of action which really works. So, as I am now presenting this to a wider audience I thought it would be important and appropriate to acknowledge this. While I don’t claim to have an absolute understanding of this teaching, in fact I likely have a limited scope of understanding, it represents how a regular guy, who happens to practice as a psychotherapist, was lead by the teachings of this great spiritual master, to a real solution to a problem that wracks many.

I am not going to detail, at this point and in this format, how I see these perspectives and messages in the text. I only felt it was critical to acknowledge the influence. This is especially meaningful and important because of the role Rebbe Nachman’s Tikun HaKlali can have in the practice of this method. Therefore it is with overflowing gratitude that I humbly acknowledge and give thinks to this great master

[1] Some Jewish Spiritual/Mystical Tools: Much has been written about the practice of saying Tikun Klali, the general rectification. It  entails the saying of a specific set of ten chapters of tehillim/psalms which Rebbe Nachman of Breslov (April 4, 1772 – October 16, 1810) organized into a group (Likutey Moharan I, 29 and Likutey Moharan II, 92) . Rebbe Nachman reported that combining these prayers together into a single unit has a power to specifically heal the spiritual and mystical blemishes that are created by chronic misbehavior. Many people utilize this set of chapters as a basis of prayer to try and heal from the pangs of regret and other consequences of unwanted behavior. Another identified practice is the bedtime recitation of Shema, in the Seventh chapter of Tanya, the Alter Rebbe of Chabad (Rabbi Shnuer Zalman on Liadi 1745–1812) quotes the Arizal, (Rabbi Yitzchak Luria 1534–1572), describing the healing power of saying the bedtime Shema and its attendant blessings, with focus and concentration. The Baal Hatanya specifically discusses this in relation to the spiritual consequences of certain unwanted behave. Finally the last aspect which relates to this new perspective is the use of the Mikvah – the spiritual mystical bath – as it is utilized by Jewish men in the morning.

[2] The only plausible explanation for their influence and impact in the cases I have observed is to claim placebo, or that the shift in how one utilizes them (which we will discuss ahead) itself has psychological benefit. Those are plausible explanations but I don’t believe that they completely account for the miraculous impacts that I have observed in others who practice these sorts of rituals.

About the Author
Menachem Poznanski, LCSW is director of The Living Room, a clubhouse for Jewish young adults in recovery from Alcoholism and Addiction. Menachem is co-author of Stepping out of the Abyss: A Jewish guide to the 12 steps (Mosaica, 2017) and the editor of both Consciously and The Light Revealed, two social media initiatives focused on the messages of Jewish recovery and spirituality. Menachem resides in Cedarhurst, NY with his wife Naomi and their children, Zoe and Tani.
Related Topics
Related Posts
Comments