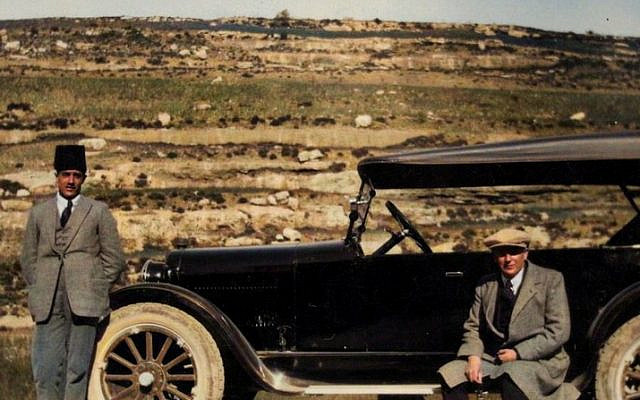 A touring car on the Ramallah-Jerusalem Road, mid-1920s. (This photo is part of the Israel Archive Network project and has been made accessible thanks to the collaborative efforts of the Yad Ben Zvi Archive, the Ministry of Jerusalem and Heritage and the National Library of Israel. Colorization: MyHeritage)

The cries rang out in the spring air of Tel Aviv, as the chief rabbi and Zionist dignitaries looked on. The gathering concluded with both the Egyptian national anthem and “Hatikvah.”

It marked the beginning of a whirlwind 1926 Zionist tour of British Mandate Palestine, on which more than 100 Egyptian educators and officials visited Tel Aviv, Haifa, Jerusalem, and elsewhere.

The group had been personally invited by Chaim Weizmann, the legendary scientist and leader of the Zionist movement who would become the State of Israel’s first president. Just a few weeks earlier, Weizmann had joined a delegation of Jewish teachers visiting Egypt under the auspices of the Zionist Executive, with the support of the Egyptian consul in Palestine and the Egyptian government, which had interceded to issue entrance visas for the group of about 80. The visitors from the Land of Israel had been warmly welcomed by local Jewish organizations, as well as Egyptian officials, provided with accommodations, celebratory banquets, kosher food, discounted rail fares and programming during their stay – including visits to schools, museums and even Al Azhar University, the prestigious center for Islamic learning founded in the 10th century. 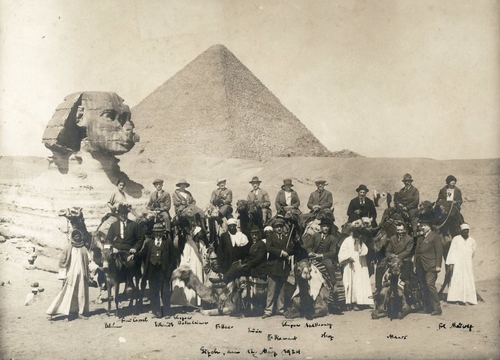 Jewish tourists in Egypt, 1920s. (This photo is part of the Israel Archive Network project and has been made accessible thanks to the collaborative efforts of the Yad Ben Zvi Archive, the Ministry of Jerusalem and Heritage and the National Library of Israel)

The following month, it was the Zionists’ turn to host their Egyptian counterparts.

The first stop after the welcoming ceremony? The Herzliya Gymnasium, the very first Hebrew high school. The delegation visited educational institutions across the land, from kindergartens to the Bezalel art academy, agricultural schools, and, of course, the newly established Hebrew University in Jerusalem.

Interest and motivation to meet and host the group was high:

Jewish councils and other bodies came forward eagerly with offers to entertain the visitors from Egypt, whose programme was crowded with concerts and receptions, the most significant of which was a banquet in their honor given by the Department of Education of the Palestine Zionist Executive before their return home.

In a speech he gave shortly after the visit, Weizmann recalled the message he had conveyed to the Egyptians:

Our way, as I told the Egyptian teachers, is the way of peace. It is narrow, difficult and unpaved. There is no false heroism on it and no false pathos, but it rests, so I believe, on the historic tradition of the Jewish people.

When the nations of the world understand that this is our goal, they will approve it and facilitate our work. Should there, however, be a doubt in the public opinion of the world as to whether we go along this way, they will not believe in our work.

In fact, to a large extent, they were boycotted and treated as traitors for having responded favorably to the Zionist invitation.

In Acre, for example, Toufic Mejdaliani, the editor of a local humorous publication, criticized Zionism and “reproached the teachers with having neglected the Arabs.” The Egyptian visitors told Mejdaliani “that they were not interested in politics and that the purpose of their visit was a scientific one.”

In a message to the editor of the Jerusalem-based Arab newspaper Mir’at Al-Sharq, the teachers stated:

We fail to understand the reason for which you boycott us and attack us in your papers. The matter is simple. The Jewish teachers visited us and we welcomed them as required by hospitality. They invited us to visit them and we accepted the invitation, believing that science has neither religion, nor fatherland. If the Jews are your enemies, they are not ours… In boycotting us, you have done more harm to yourselves than to us… Why did you not profit by the valuable opportunity of acquainting us with your cause? Do you think all the world regards the Zionist question as you do?

According to the teachers, though, the reception by fellow Arabs was not just counterintuitive, but also hurtful:

You have wounded us deeply by your campaign against us. We shall never forget that in certain towns they would not give us water. We never expected an Arab country to act in this way.

It was important for the teachers to stress that they had covered their own travel expenses (as opposed to accepting gifts from the Zionists), and would have loved to meet with more Palestinian Arabs if only they would have been welcomed and invited. Nonetheless, despite the hurt and disrespect they experienced during their visit, the Egyptians’ message ultimately took a dramatic and conciliatory change of course:

… we forgive you because we regard your attitude as dictated by patriotism. The Jews wished to separate us from our brothers… They wished us to emphasize the ability of Zionism, but they were disappointed.

The delegation’s official report and some accounts of the visit published back in Egypt, however, seem to tell a bit of a different story.

One teacher was particularly taken by the Jewish kindergartens, admiring the teachers’ “good will and patience,” the tidiness of the classrooms, and “specially charmed by the music lessons.”

He concluded that the older schoolchildren were “symbols of love for study,” was struck by the fact that the very recently revived Hebrew language already had terms for modern concepts, “while teachers in Egyptian high schools… complain of the limited terminology of the Arabic vocabulary…”

The official Egyptian Ministry of Education report of the visit, which came out a few months later, noted numerous features of the Hebrew educational system worthy of praise, including the academic and mental rigor, the tidiness of the classrooms, the attention paid to diction, and the importance placed on physical fitness. 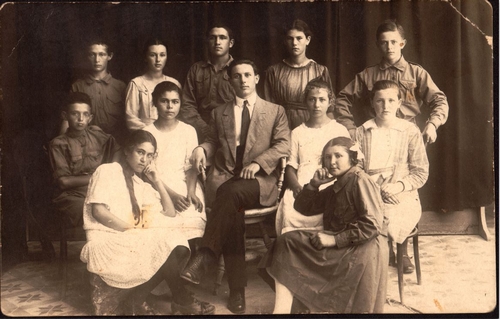 Students in Petach Tikva’s Pica School, 1926. (This photo is part of the Israel Archive Network project and has been made accessible thanks to the collaborative efforts of the Oded Yarkoni Historical Archives of Petach Tikva, the Ministry of Jerusalem and Heritage and the National Library of Israel)

The revival of Hebrew was also seen as something to admire, as was the fact that the educational system was extremely economical – providing high quality education at a most reasonable cost.

Summing up the trip in an interview to the Zionist newspaper The Palestine Bulletin, the Egyptian undersecretary for education, who headed the delegation, declared:

We came here as colleagues of the Hebrew educational workers. We appreciate education at so high a standard that we think that nations should spend every penny on education… While it is early yet to speak of exchange of professors and students, we should do everything to strengthen cultural bounds between both countries in all other possible ways.

Before the educators even returned home, Chaim Weizmann and other Zionist leaders were already visiting Emir Abdullah at his palace in Amman. There, over lunch, they discussed the Jewish teachers’ visit to Egypt, and the Egyptian teachers’ visit to Mandatory Palestine, emphasizing the importance of such connections, and even suggesting that the newly established Hebrew University of Jerusalem and its collection of Arabic texts (now part of the National Library of Israel), should be used by scholars from across the Arab world.

About the Author
Zack Rothbart is a Jerusalem-based writer and publicist. He's currently Senior Strategist at WestRay Communications, a boutique firm working with some of Israel's most interesting tech companies. For the better part of a decade, he served as the National Library of Israel's international spokesman. Zack tries to learn something from everyone, and lives with his endearing and thought-provoking family, for which he is grateful. Feel free to email him via the "Contact Me" link above or follow him on his recently opened Twitter account: @ZackRothbart.
Related Topics
Related Posts