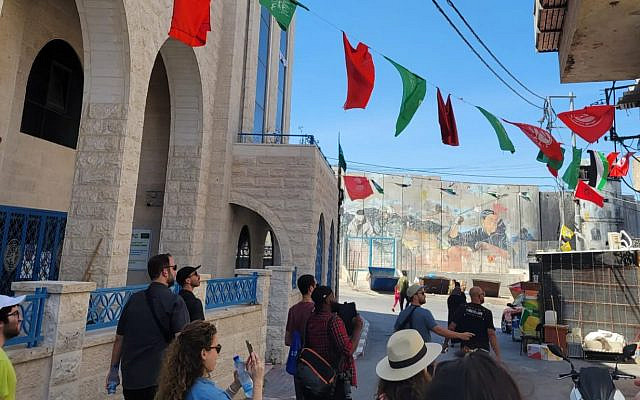 From July 10 to 17, I was one of 15 people who participated in IPF Atid’s second Summer Delegation, where we traveled throughout Israel and the West Bank. Our experiences humbled us with the facts on the ground, but not just by going over numbers and statistics, but also through human interactions. Indeed, we met with many Israelis and Palestinians, from grassroots activists to former politicians and security officials. We also met with Israelis and Palestinians with a wide range of perspectives, from those who support a two-state solution to those who support their own version of a one-state solution to an Orthodox Jewish settler who supports a non-traditional two-state model.

By meeting with many different people on the ground, we were able to more deeply comprehend Israelis’ and Palestinians’ perspectives and how those views influence the politics of their respective societies. As a result, one of the main themes we took away from our trip was the importance of connecting ourselves with the Israeli and Palestinian communities on the ground and understanding to what extent it is our place as Jews in the diaspora to have a say in their societies’ affairs.

One of the more insightful and challenging encounters we had with the Palestinians was during our tour of the Aida refugee camp in Bethlehem. As North American Jews who support a two-state solution for the Israeli-Palestinian conflict, we obviously do not support a full Right of Return for the Palestinian refugees, but we learned why it is still important for us to understand why the story of the Nakba (the Catastrophe) and their dream of returning to their homes are important to their identity and community.

As we toured around the camp, we saw graffiti everywhere depicting a narrative of a people who were kicked out of their homes and are fighting to return and take back their land. We also met with a couple of Palestinian youth activists at the Aida Youth Center who talked about how the memory of the Nakba and the dream of returning to their homes is something they think and talk about almost every day and shapes their national consciousness. In fact, they pointed out that if you asked a Palestinian child in the camp where they are from, they would not say Bethlehem or the Aida camp, but places such as Lod, Haifa, or Jaffa, where their grandparents were from in what is today Israel-proper.

By hearing the perspectives of the Palestinian refugees on the ground, we were able to more deeply comprehend how the memory of the Nakba plays a significant role in their collective identity as Palestinians and why it has been difficult for them to compromise on the Right of Return in past negotiations with Israel.

Yet, at the same time, the youth activists emphasized that they are also focused on the present. They shared with us some of the social activities they provide for young Palestinians in the camp, such as playing in soccer tournaments and working on environmental projects, to build a healthy sense of community. Indeed, the work of Palestinian youth and grassroots organizations was another common and inspiring theme we noticed during our many conversations with Palestinians, but we also learned that they are only able to do so much.

During one of our debriefing sessions, an analyst from an Israeli think tank argued that Palestinian civil society is strong and weak at the same time. She said that, while Palestinian grassroots movement are proactive and get a lot of things done, they are only able to make an impact at the micro-level. Once they start to rise to the meso- and macro-levels, the Palestinian leadership clips their wings—and this relates to the issue of a lack of representation.

Something we often talked about was how the Palestinians cannot commit to viable negotiations with Israel unless their leadership is united and committed against terrorism. However, our interactions with Palestinian activists and former officials helped us realize that it needs to go further than that. The Palestinian leadership will also need to be more broadly representative of their diverse society in order to negotiate on their behalf.

This was something we discussed during our meeting with a former Palestinian official in Bethlehem who talked about how Palestinian women and Christians are marginalized within their society. She emphasized that these two groups—along with Palestinian youth—will need to be more represented in leadership positions going forward in order for them to negotiate with Israel.

Shifting to Israel, while we were exposed to a variety of perspectives and communities within their broader society as well, some of the more challenging conversations we had were with the religious Zionist and Jewish settler communities.

We met with a former member of the Binyamin Regional Council who talked about the day-to-day affairs of Jewish settlers. She explained that many of the Jewish settlers vote for far-right religious Zionist parties, not necessarily out of ideology, but rather because they are looking for parties that will provide them the basic services they need for their daily lives. We also met with a nationalist Haredi Jewish woman at the Beit Hadassah Museum in Hebron where she talked more about the ideological desires of Jews to settle in Judea and Samaria (the West Bank), as it is where the Jewish people’s patriarchs and matriarchs are supposedly buried and where some of the holiest cities in Jewish history are.

While we appreciated having the chance to meet and speak with Israelis we disagreed with on the conflict with the Palestinians, we could not help but feel deeply concerned after witnessing certain people and monuments that not only represented opinions we disagreed with, but represented ideas we felt threaten Israel’s core values of morality.

We saw multiple signs and monuments in Hebron promoting the extremist ideology of Kahanism and their followers, such as Baruch Goldstein—a Jewish settler extremist who massacred 29 Palestinians in 1994 while they were trying to recite their prayers in al-Ibrahimi Mosque (the Tomb of the Patriarchs). We even saw people going to pray at Goldstein’s grave and countless stones were placed on his tombstone to memorialize him.

A few years ago, such extremism may have been fringe in Israeli society. However, after visiting Hebron and speaking with a couple of expert Israeli officials, we became deeply concerned that Kahanism is becoming more mainstream in Israel.

When we met a prominent former Israeli official, one of his main points was that many Zionists throughout history and across the spectrum—from Ze’ev Jabotisnky to David Ben Gurion—have emphasized that in order for Israel to survive it needs to be both strong and have the moral high ground. Israel is certainly strong today, as it should be, but after witnessing the gravesite of Baruch Goldstein and disciples of Meir Kahane, such as Itamar Ben Gvir, rising in popularity in the Knesset, Israel is dangerously on the verge of losing the moral high ground.

We talked about this more deeply with an expert Israeli political commentator. She argued that there are a couple of factors that have allowed Kahanism to become more mainstream within Israel today. One is that racism is, unfortunately, rising among Israeli Jews. For example, according to the Israel Democracy Institute’s 2021 Index, the percentage of Israeli Jews who believe Jews should have greater rights than non-Jews in Israel rose from 25 percent in 2015 to 42 percent in 2021. A second factor she talked about was how former Prime Minister Benjamin Netanyahu legitimized Ben Gvir by imploring other right-wing parties to give him a seat in their slate in 2019.

When I asked what needs to happen to heal Israeli society and push Kahanism back to the fringes, she said that it will depend on who takes charge of Likud after Netanyahu. For instance, she suggested that if someone like Nir Barkat succeeds Netanyahu then people like Ben Gvir may become even more emboldened whereas if someone like Miri Regev rises to power then they may distance themselves from Kahanists.

It was the latter possibility that may have given some of us hope that we can still help save Israel’s core values, but that brings up the final and perhaps most important question we discussed during the delegation: why is it our place as diaspora Jews to have a say in Israel’s (and presumably the Palestinians’) affairs?

After jumping into breakout sessions, we concluded that we, as diaspora Jews, have a similar connection with the State of Israel—and to a certain extent the Palestinians—today. Although we are not official members of their societies, we still have a stake in their affairs. Many of us have friends and family in Israel and the future of the Palestinians will always be intertwined with the future of the Jewish state and vice versa. Therefore, we concluded, that while we as Jews in the diaspora should not have a say on Israeli and Palestinian domestic policies, such as healthcare, it is our place to have a say on their actions and policies that affect Israel’s identity as a Jewish, democratic state and the security of the region, as those issues have a more direct impact on us.

Since we are impacted by what goes on in Israel and Palestine, it is all the more reason why we, not only should have a say in their societies’ affairs, but also need to further connect ourselves with their communities on the ground. Going on this delegation helped us more deeply comprehend what is going on in Israel and Palestine—both the positive and negative things we believe may or may not promote peace. By continuing to engage and connect ourselves with the Israelis and Palestinians on the ground, we, as Jews in the diaspora, may be able to help promote a just and sustainable solution to the conflict.

About the Author
Jonah Naghi is a Boston-based writer and the Chair of Israel Policy Forum's IPF Atid Steering Committee in the city of Boston. A frequent commentator on Israeli-Palestinian and US-Israel affairs, Jonah has spent extensive time in the region and received his Masters in Social Work at Boston College (2020) and LCSW (2021). All the views expressed are his own.
Related Topics
Related Posts