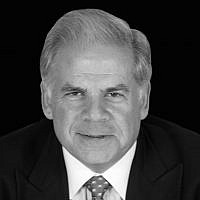 The Blogs
David Birnbaum
Apply for a Blog
Please note that the posts on The Blogs are contributed by third parties. The opinions, facts and any media content in them are presented solely by the authors, and neither The Times of Israel nor its partners assume any responsibility for them. Please contact us in case of abuse. In case of abuse,
Report this post.

From the 1940s through the ‘70s, Israel faced encirclement by hostile Arab states and their conventional armies (and some militias). So valiantly did Israel prevail over this encirclement that she is now a regional superpower. At least two of her former encircling adversaries, Egypt and Jordan, are de facto allies, with former adversary Saudi Arabia now playing the role of an ally more than an adversary.

Today, however, a new threat of encirclement looms; this new one will be choreographed by essentially one adversary, Iran, which was not even a party to the previous encirclements. Iran’s diabolical game is unlike that of the original adversary group; Iran may seek to encircle Tel Aviv with a 200-degree arc of rocket fire — to drain, diminish and bleed the Jewish State. Iran will seek to bring the situation to a state of siege, with the deadly drama projecting inward to the Israeli citizenry and outward to the Arab world.

Of course, this deadly encirclement would project Iran’s power and supercharge its status across the region. Any diminution of Israel raises the approval ratings of the ruling junta of the ayatollahs both locally in Iran and regionally across the Middle East.

But what if Iran does try to pulverize Israel with blanket nuclear strikes in five to fifteen years? This is the prevalent fear. Yet in the hypothetical Israel-Iran nuclear theater in the foreseeable future, there is a radically asymmetric balance of thermonuclear power. Currently, according to monitors of nuclear proliferation, the balance of power is widely believed to be Israel: 100+ nuclear weapons; Iran 0. (While there are many sources to cite, one of the most credible is the DC-Based Arms Control Association.)

An Iranian nuclear attack on Israel would doom Iran and its citizenry to an annihilating Israeli counter-strike. In other words, reports of Israel’s imminent destruction by nuclear attack as instigated by Iran are, respectfully, exaggerated. It behooves us to refocus on the clear and present danger facing the State of Israel.

If Iran can bring closure to its pro-Assad and anti-ISIS military campaigns, it will have time, money and agents-on-the-ground to facilitate assorted terror campaigns against the Jewish state, including a potential arc of rocket fire.

Israel has for many years faced a potential war on two fronts — with Hezbollah on the north and Hamas on the south; to date, however, the two fronts were never truly active intensely simultaneously.
Incoming rocket fire is negligible at the moment; however, fast-forward to mid-2020. By that point, Israel might actually face an Iranian-inspired rocket assault from four fronts: Hezbollah rockets from the north; an intifada on the West Bank; Hezbollah longer-range rockets from the closest point in (the now-dysfunctional state of) Iraq along the Jordan/Iraq border, and Hamas (and Islamic Jihad) rockets from the south.

But, how might the geo-political landscape deteriorate so far so fast? How could Israel go from quiet in mid-2015 to a four-front arc of fire in mid-2020?

Iranian sway over at least the first three fronts is basically now increasing on a monthly basis. Additionally, other factors are in play. Iranian Revolutionary Guards are now in Syria and environs. Iran has proclaimed its intent to stir up the West Bank. Iran is gradually turning Iraq into its military playground, if not into a full-fledged vassal state. When America eventually withdraws from Iraq totally, if not earlier, Western Iraq could be turned (by Iran) into a launch pad for terror missiles westward to Israel. This time, however, the mobile launchers will be hidden in underground tunnels.

The fourth front, Gaza, is currently in ruins. But, with Iran actively funneling weaponry into Gaza, by mid-2020 Hamas could be a potent force yet again. Of course, Egypt will do its very best to keep Hamas as impotent as possible.

To whatever nominal degree Iran becomes a nuclear state it will still be emboldened; it will feel that it is immune to retaliation by Israel by any combination of Israeli modalities; Iran will feel better able to intimidate; better equipped to project power, invincibility and inexorability; it will be dangerously pumped-up by hubris.

It seems that Iran is likely to be preoccupied for several years with the business of propping up Assad’s military-political position and weakening ISIS. Once Iran has troops or militias on the ground anywhere in the region, it is unlikely to truly ever yield that ‘ground’ fully and voluntarily. When Iran achieves the preponderance of its objectives on both of these fronts, it is likely to try to choreograph the undermining of Israel on multiple fronts. Simultaneous rocket attacks on Israel from four fronts would be heaven to the ayatollahs.

Needless to say, a defensive war on multiple fronts is not optimal. Even a two-front war is anathema to any serious strategist. Israel must preemptively break up the potential four-front arc of rocket fire.

There is a window of several years to neutralize as many of these fronts as possible and focus on the encirclement threat. To properly prepare ourselves, we cannot be overly distracted by doomsday scenarios that are simply implausible. That distraction itself might prove deadly. While it is not unrealistic to anticipate that Hamas might attempt to deploy a dirty bomb in downtown Tel Aviv, the salient threat from Iran is conventional rocket terror via surrogates, not nuclear terror. Iran itself is not about to push the self-destruct button through the act of nuking Israel.

About the Author
David Birnbaum is the architect of Potentialism Theory. His Summa Metaphysica treatise has been the focus of a landmark international academic conference (Bard College, Upstate NY, April 16-19, 2012); the work has been a course text at 15 institutions of higher learning as well as the prime focus of over 100 articles globally in the past 18 months alone.
Related Topics
Related Posts
Comments