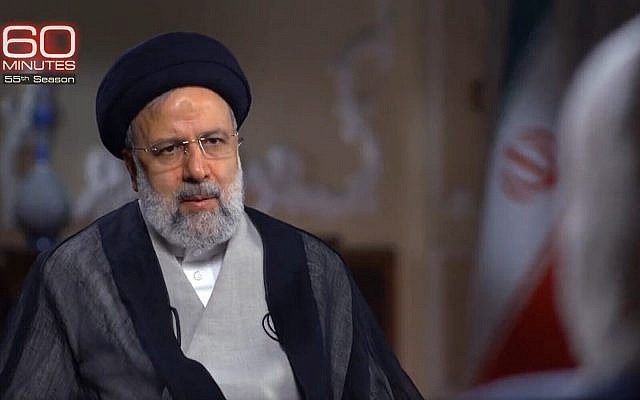 Iranian President Ebrahim Raisi during an interview with CBS at the presidential compound in Tehran on September 13, 2022. (Screenshot: Twitter, used in accordance with Clause 27a of the Copyright Law)

The recent 60 Minutes interview with Iranian President Raisi raised once again, in a very public way for the first time since Mahmoud Ahmadinejad was president, the reality of Holocaust denial by an Iranian leader.

It has long been widely understood that the Iranian regime is the leading country threatening the state of Israel on many levels. So where does questioning the Holocaust fit in to this obsession with Israel?

It reflects a mindset of conspiratorial thinking about the Jewish people that is the most dangerous since the horrors of the Nazis in the 1930’s and 1940’s. It moves from the rejection of the Jewish state to denying or diminishing the reality of the murder of six million Jews. It is both an instrumental perspective to strengthen their argument against the legitimacy of Israel and a manifestation of conspiracy thinking that has taken over the regime.

Instrumentally, denying the Holocaust is an attempt to eliminate what the regime believes is the root of the founding of Israel and its continuing legitimacy. It is only because of the sympathy for the Jewish people after the alleged murder of two-thirds of European Jewry that serious international support for a Jewish state emerged. And, in this way of thinking, its legitimacy continues to rest on that unspeakable suffering.

Denying the reality of the Holocaust is an important path toward undermining Israel’s legitimacy. This approach, as horrendous and dangerous as it is, has an element of rational reasoning underlying it. Not of course in denying what happened, but in having a clear political goal in espousing it.

The other level of Iranian Holocaust denial is just as dangerous and even more irrational. It is a manifestation of a belief system that sees Jews as all-powerful and poisonous. How is it possible that books have been written, movies made, museums established, proclamations issued, all to commemorate the murder of six million Jews, when it didn’t happen?

The answer: the Jews control every form of communication and media in the world and were able to foist this fantasy on the international community to win support for the illegitimate entity known as the state of Israel.

What we see in the Islamic Republic’s addressing the Holocaust is a combination of the most cynical political maneuvering on the one hand, and the most unreasonable application of antisemitic conspiracy theories on the other.

This mix of the rational and irrational regarding the Holocaust in Iran is reflected in the three approaches to the matter that surfaced during Ahmadinejad’s presidency but continues through to this day.

The first is simple Holocaust denial. As noted, it says that the murder of six million Jews is a hoax foisted on the world by the all-powerful Jews to win sympathy for Israel.

The second is more nuanced, merely raising doubts about the veracity of the Holocaust without outright denying. Here Raisi joins in that tradition, saying we really should be open to a serious investigation of the facts. Let us not stifle debate, presenting themselves as representing the high ground on the subject, open to all perspectives. And so they have proudly held cartoon contests speaking to the subject as to what really happened to the Jews.

The third stream was also articulated at times by Ahmadinejad, where he might concede that the Holocaust might have actually happened, but why, he asked, should the Muslim world pay the price for what the Europeans did to the Jews. In other words, if the world wants to repay the Jews for what was done to them by the Germans and their collaborators, do it in Europe where it happened and not inflict the Muslim Middle East with this foreign and insidious entity.

All these streams of thinking are among the most dangerous forms of Holocaust denial and outright antisemitism the world has seen for decades and should remind every world leader of the vital importance to prevent Iran from getting a nuclear weapon, and acting to make sure the regime cannot continue its rampage of proxy wars throughout the Middle East.