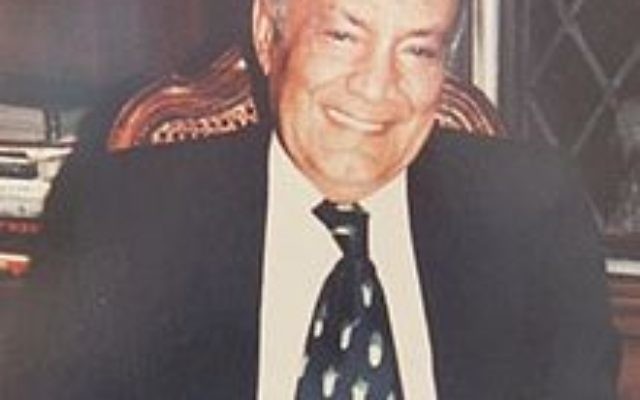 Habib Elghanian, Iran's Jewish community leader executed by Islamic regime in May 1979 on false charges of spying for US and Israel.

Today marks the 41st anniversary of Iran’s Ayatollah regime wrongly executing the country’s Jewish community leader Habib Elghanian. He was the voice and symbol of Iran’s once vibrant 80,000 strong Jewish population. His execution by the regime of the Ayatollah Khomeini on trumped up charges of spying for Israel and America, sent shock waves through Iran’s tight-knit Jewish community. It prompted scores of Iran’s Jews to immediately sell off or abandon their assets altogether in order to flee the country out fear for their safety. But the execution of Elghanian was not an exception, but the beginning of the Ayatollah regime’s war against the Jews. Since 1979, this radical Islamic regime in Iran has executed or killed nearly two dozen Jews, arrested and tortured thousands more and confiscated billions of dollars’ worth of assets from the Jews.

Today apologists and lobbyists in America for Iran’s current radical Islamic regime claim that Elghanian’s killing was an exception and that the Jews of Iran live in peace and security. These claims are 100% false and pure Ayatollah regime propaganda! In reality, the Jews of Iran live as third class citizens in Iran and the regime’s radical Sharia laws convey inferior status to Jews and other religious minorities as well as inequality under the law. Likewise the Ayatollah regime in Iran has executed or killed nearly two dozen Jews. The following is a short list put together by Iranian Jewish activist Frank Nikbakht, who heads the Los Angeles-based “Committee for Minority Rights in Iran”:

Additionally, the following is just a brief list of the anti-Semitic statements by the Iranian regime’s leadership or anti-Semitic acts carried out in Iran which were never stopped or investigated by the regime during the last 20 years:

So to the English speaking Ayatollah regime’s chief propagandist Javad Zarif who goes on U.S. news programs proclaiming the Iranian regime’s “love for the Jews of Iran”, “respect for the Jewish religion in Iran” we say stop lying! Your lies are believed by no one in their right mind! The Ayatollah regime’s apologists and loyalists living in the U.S. and Europe who praise this sick demonic regime should also stop spewing their lies about the “great” status of Jews in Iran. These same propagandists for the Ayatollah regime should stop using Iran’s Jews to improve the criminal image of their paymasters in Tehran!

The Ayatollah regime in Iran and its lackeys in the West can continue to dismiss Elghanian execution and even try to sugar coat the regime’s mistreatment of Iran’s Jews, but their long heinous record of killing and abusing Jews is something they can never escape. In the end, Iran’s war against the Jews did not begin with the Iranian regime’s mullahs funding and arming Shiite and Palestinian terrorists to kill Israelis. It began when they shot Habib Elghanian in the heart 41 years ago and declared the regime’s war against the Jews.